I hoped that it was going to be a case of third time lucky with a recent trip to the north of Hoy. My previous two visits during the Summer had not been blessed with decent weather, or at least not pleasant enough to coax dragonflies and damselflies into flight. Initial signs were encouraging, although the forecast warned of several heavy showers during the day, and perhaps a thunderstorm. 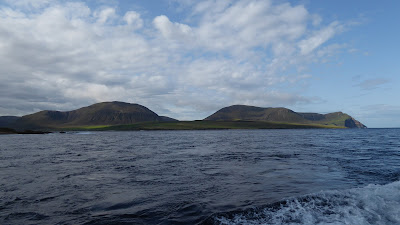 First port of call was the RSPB’s Eaglewatch, where we had very distant views of the now-fledged youngster. By 'very distant', I would say at least half a mile. And by 'views', I mean squinting at the centre of this zoomed and cropped image. 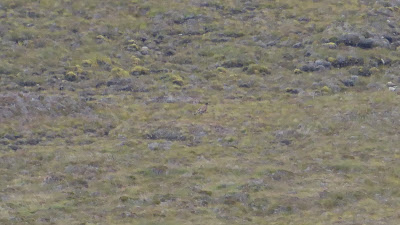 We walked west, along the single track road, pausing frequently to look at a flower here, an insect there, or a bird overhead. Whilst we saw few butterflies or moths on the wing, there were plenty of caterpillars to be seen. Top to bottom: Light Knot Grass moth; Fox moth; Red Admiral butterfly; and Northern Eggar moth. 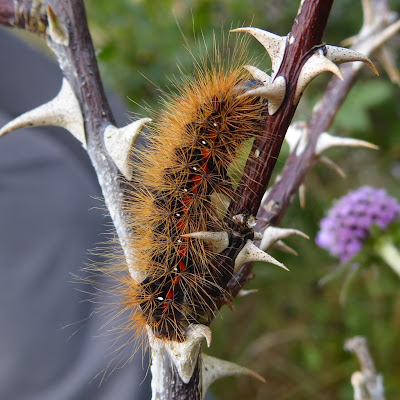 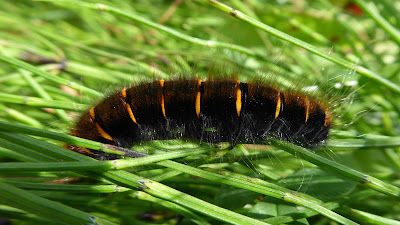 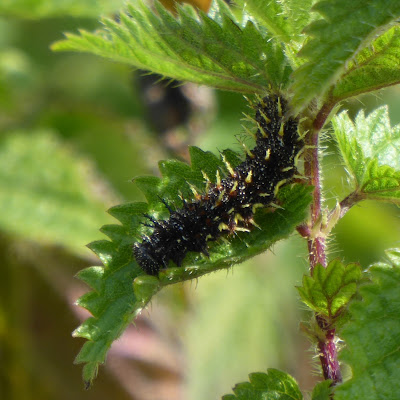 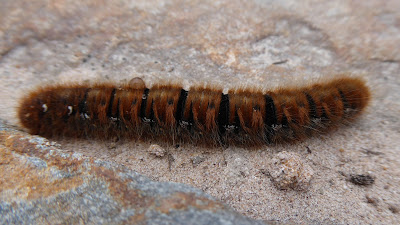 Following a picnic lunch at Rackwick Bay, we had intended to visit a small area of maritime heath behind the dunes at the southern end of the beach. However, in the previous days, Hoy had obviously had much more rain than the rest of Orkney, and the Rackwick Burn couldn’t be forded without the risk of a soaking. Instead, we explored the bog pools further back from the beach, an area that I have tended to avoid, despite its suitability for Odonata, due to the presence of Arctic Skuas and a gull colony. This late in the season, however, the birds were gone, and we were able to find three species of ode. 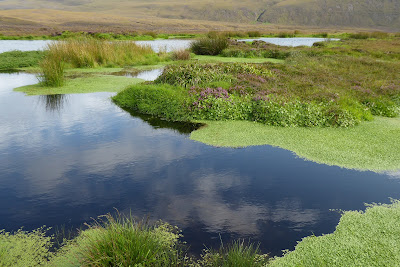 There were dozens and dozens of Common Blue damselflies, all male, their sky blue colours drifting just above the water’s surface and across the bright green duckweed. Several Black Darters flitted between the smaller pools, again these all seemed to be male, and likely to be looking for a mate. Our Lass found an ovipositing pair of Emerald Damselflies, the male still clinging to the female as she carefully laid her eggs on some submerged vegetation. We watched as she continued to work her way down the plant stem, until she was fully submerged and lost from sight.

Walking back to Moaness over the Old Post track, we were aware of a very dark sky to the south, but we blithely carried on under our patch of blue sky, hardly flinching when a rumble of thunder reached our ears. Fortunately, the storm tracked east through the Pentland Firth and we were able to stay dry. Several Common Hawker dragonflies were foraging alongside the path and, even better, they perched up where we could see them. Top, a male, and bottom, a female. 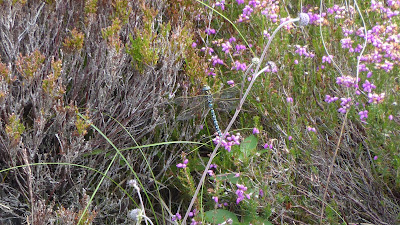 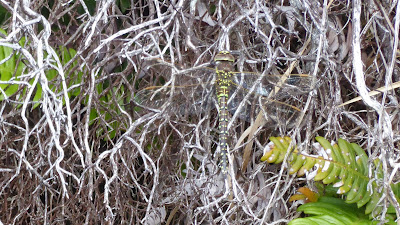 By now, we were experiencing that joyous Scottish Summer tradition, being eaten alive by clouds of midges. Slightly less annoying, and much more photogenic, were the flying ants which must have been triggered to swarm by the stormy weather. 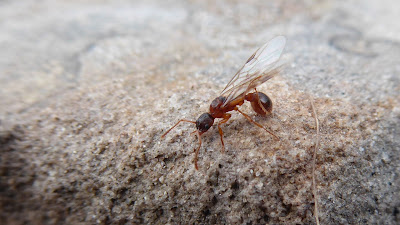 Before we caught the return ferry, there was just enough time for tea and cake at the Beneth'ill Cafe. What a time to be alive!
Posted by Imperfect and Tense at 22:33

Sounds like a perfect day. Glad you managed to dodge the storm and spot a few species. Love the shot of the bog pool. B

Oh yes I can see the Eagle when I enlarge the photo. I thought you were teasing to start with. Just back from a visit to Knepp rewilding - fantastic place, got up close to a Brown Hairstreak. Happy days. I'd recommend it if you find yourself in Sussex.

Hi B, it was a lovely day, with good company and loads of wildlife. The bog pools pictured actually look as though there's too many nutrients in the water, the vegetation was very green. It can't be run-off from agriculture, none at the location, so must be due to the wildfowl which use the pools. That said, the male Common Blue Damselflies looked amazing against the green!

Hi CT, oo, Knepp, we are quite keen to visit there. Isabella Tree's book was fascinating, and the success that the project has with species which are declining elsewhere is absolutely amazing.