In our 21st Century lives, it's often not possible to distinguish the cycle of the year in any tangible sense, beyond a vague notion of what is being marketed by retailers. Easter eggs? Must be January 2nd. Santa hats? Probably mid September.

One of the joys (and occasionally that phrase is uttered between gritted teeth in the brunt of some horizontal weather) of living a more elemental Orcadian life is that the cyclical nature of the seasons is much more obvious.

There's the rather prominent effect of the passage of the setting sun back and forth along the western horizon. There's the holiday time-share experience of summer and winter migratory birds: skuas swapping skies with berry-ravenous redwings; and long-in-the-beak oystercatchers giving way to long-tailed ducks.

But this weekend, a more subtle change occurred, close to Tense Towers and close to our hearts. The muddy field entrance, just over the road from our front garden, cattle-poached and unprepossessing, has brought a little piece of Winter to our doorstep. And although these birds are resident in Orkney throughout the year, only during the colder months do Snipe choose to visit our immediate vicinity. They are very welcome. 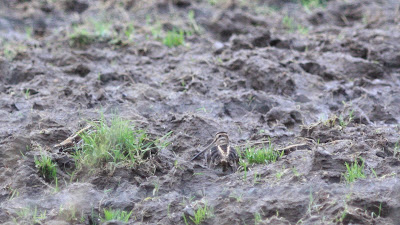 Posted by Imperfect and Tense at 20:15 4 comments:

Any plans we may have had for Saturday were ripped up when I received a request, late on Friday, to attend a problem with a client’s customer in Caithness, across the Pentland Firth on the Scottish mainland. Our lifestyle, though occasionally idyllic, means that I cannot afford to miss out on a work opportunity when it arises. So, after running a local errand this morning, I was able to catch the lunchtime ferry out of St Margaret’s Hope, then drive from Gill’s Bay to Thurso, arriving on site by early afternoon. An hour and a half later, the problem was rectified, I was bidding farewell to a happy customer and heading out into the sunset.

By the time I reached Gill’s Bay, darkness was creeping over land and sea, the temperature was beginning to drop and a slippery frost was forming on the damp ground. The ferry wasn’t due for another two hours. Reason enough, then, to repair to the terminal building for a bowl of hot soup, a slice of cake and several mugs of tea.

This post has been written (though not uploaded) aboard m.v. Pentalina, as she makes her way northwards, back across the Pentland Firth. In another few weeks, it will be three years since I made this self-same journey to become a resident of Orkney. I must admit, if anyone had said to me, four years ago, that our lives would be as they are now, I would have thought it utter madness. But in a very good way.
Posted by Imperfect and Tense at 20:59 3 comments:

It's almost the middle of November and there's not much bloggage to show for it. This is normally indicative of a loss of muse (as opposed to 'mouse') or, as in this case, a chap just being so busy with consequential stuff that there's not been time to put finger to keyboard.

Yes, I do type that slowly.

Any road, here's a quick digest of my month so far, as seen through the eyes of my phone.

Posted by Imperfect and Tense at 13:24 2 comments:

Folks keep asking me about the mouse. Maybe it's to take their minds off other stuff, y'know, focussing on something inconsequential to prevent the dread thoughts from breaking through. Whatever they might possibly be?


Well, there have been developments on the rodent front. By the end of October, no mice had been harmed in the writing of this blog. In fact, by that point, several days after the new carpets were fitted, I was only giving the traps a cursory glance to confirm either the presence or absence of an ex-mouse. Life was good: the house was cosier, our feet were warmer and commensals were fewer. Then I thought to check that the bait was still in the traps (yeah, you're right, I was checking first thing in the mornings, before my eyes were properly dialled in). Guess what? Nothing. Clean as a whistle.

So I'm pondering "Can a mouse lick off all the peanut butter without springing the trap?" and "Wood lice? Do they even like peanut butter?"

As there had been no further mouse scat, we couldn't immediately answer those questions, so I reset the traps (by this time they were located in the garage, rather than the lounge) with good old-fashioned cheese. Within a few hours, we had us a dead mouse, and we blithely wondered whether that was the end of the matter.

On the following Friday, after several days of zero readings on the mouse-ometer, I retired early as I needed to be up at six the next morning to catch a ferry. As I went to switch off the bedside light, something scurried from under a wardrobe and dashed behind a chair. Bearing in mind that we'd just been watching a tv programme featuring a tarantula, my reaction was reasonably calm.

Yep, it was a mouse. Oddly, decades of wildlife watching can't be unlearnt in a trice, so we spent an interesting half hour contemplating our options, whilst the mouse explored the room. When it sat in one of my slippers and stared back at me, I felt that the time to do something was probably now. Chuntering about lost sleep, rodents with an unerring sense of bad timing, and much else besides, I brought the traps from the garage and placed them in the bedroom. We then spent another half hour watching the mouse run over the traps, dislodging the cheese and caching it under our bed.

My next plan wasn't rocket science, but I needed something to work in a hurry so I could get some shuteye. In fact, forget rocket science, a rock would've been simpler, though the cleaning bill may not have been. I shut all the doors to the corridor in the centre of the house, save for our bedroom and the hall. Once the mouse was herded (ok, maybe not 'herded') into the corridor, it was reasonably easy to trap it in the hall, then open the front door and chase it out. A very temporary solution, I'll admit.

Now, my trip to Caithness (hence the early ferry) turned into an overnighter, so that Our Lass spent Saturday night alone. Almost. She was awakened in the night by a clattering in the corridor, which manifested itself as a mouse repeatedly trying to run up a small set of stepladders (the 3 step variety, just bought, unwrapped, but not put away). As we live in a bungalow, this meant that she could now legitimately sing "I saw a mouse. Where? There on the stair. Where on the stair? Right there!" a la 'A windmill in Old Amsterdam'.

Having taken advice from Sian on Graemsay as to how to catch a mouse in an emergency, Our Lass deployed an empty cereal box to good effect and released the wee beastie in the field over the road. Let's upgrade this solution to the status of 'mildly temporary'.

My return on Sunday was to tales of night time derring-do armed with only a cardboard box, plus pyjama-ed excursions to the Great Outdoors. I don't think either of us were expecting this to be the end of the matter.

Right about now, I recalled the umpteen lectures on hygiene that First and Second Born received when they were out with the RSPB, as teenagers, on mammal trapping surveys. Always wash your hands after handling mice/shrews/voles. It also hit home that the problem might be bigger than we had first thought and that it needed to be nipped in the bud. Harsh, but true.

So, confirming that the garage wasn't mouse-proof and probably impossible to make so, I ensured that the door from the garage to the kitchen was mouse-proof, and also rebaited the traps in the garage with walnuts. Firmly tied to the triggers.

Sure enough, after at least eleven days on the run, in and around Tense Towers, the Bonnie (or Clyde) of Mus domesticus tried one raid too many, its slipper snuggling days were finally over.

I can't say that I blamed it for trying, clogs must be quite chaffing in comparison.
Posted by Imperfect and Tense at 16:33 3 comments: