The forecast was for drizzle

Last week, I met up with Sian from Life on a Small Island, during one of her shopping visits to the 'big city' of Kirkwall. Ensconced in a favourite cafe, we ordered lunch and began catching up on all that had happened since we last saw each other.

Before our food arrived, Sian announced that she had been very remiss and not given us a house-warming present when Our Lass and I moved into OTT (which is probably as much our fault as we'd not managed to arrange any sort of soiree to celebrate the event).

A large lime green carrier bag appeared from under the table but, before I could investigate its contents, Sian also produced a folded piece of A4 paper, brandished it in my direction and told me that it was a necessary addition to the gift. 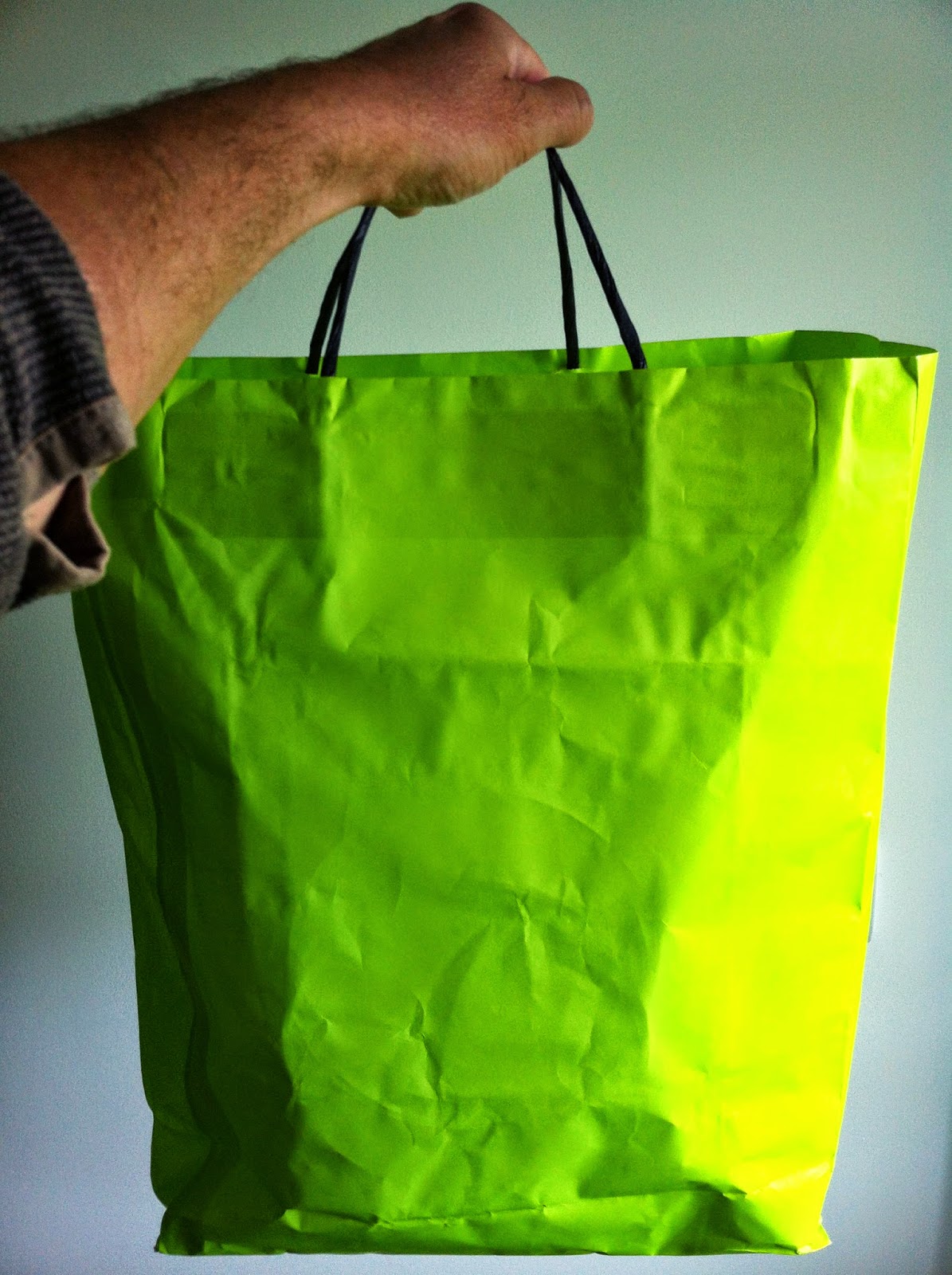 Carefully unfolding the sheet of paper, I discovered that it was a recipe. And peeking into the bag revealed all the ingredients and cooking utensils needed to carry out the baking instructions. Surprised, possibly in the early stages of 'Bake Off' shock, I heard Sian's voice, as if from afar, telling me that, "You're on Orkney now, you will need to be able to produce a Lemon Drizzle Cake at the drop of a hat."

And so, yesterday afternoon, with the kitchen to myself (save for Test Match Special on the radio), I embarked upon the culinary challenge that is a small stepping stone on the journey towards assimilation into island life.

Firstly, the bag was unpacked to reveal the ingredients and utensils... 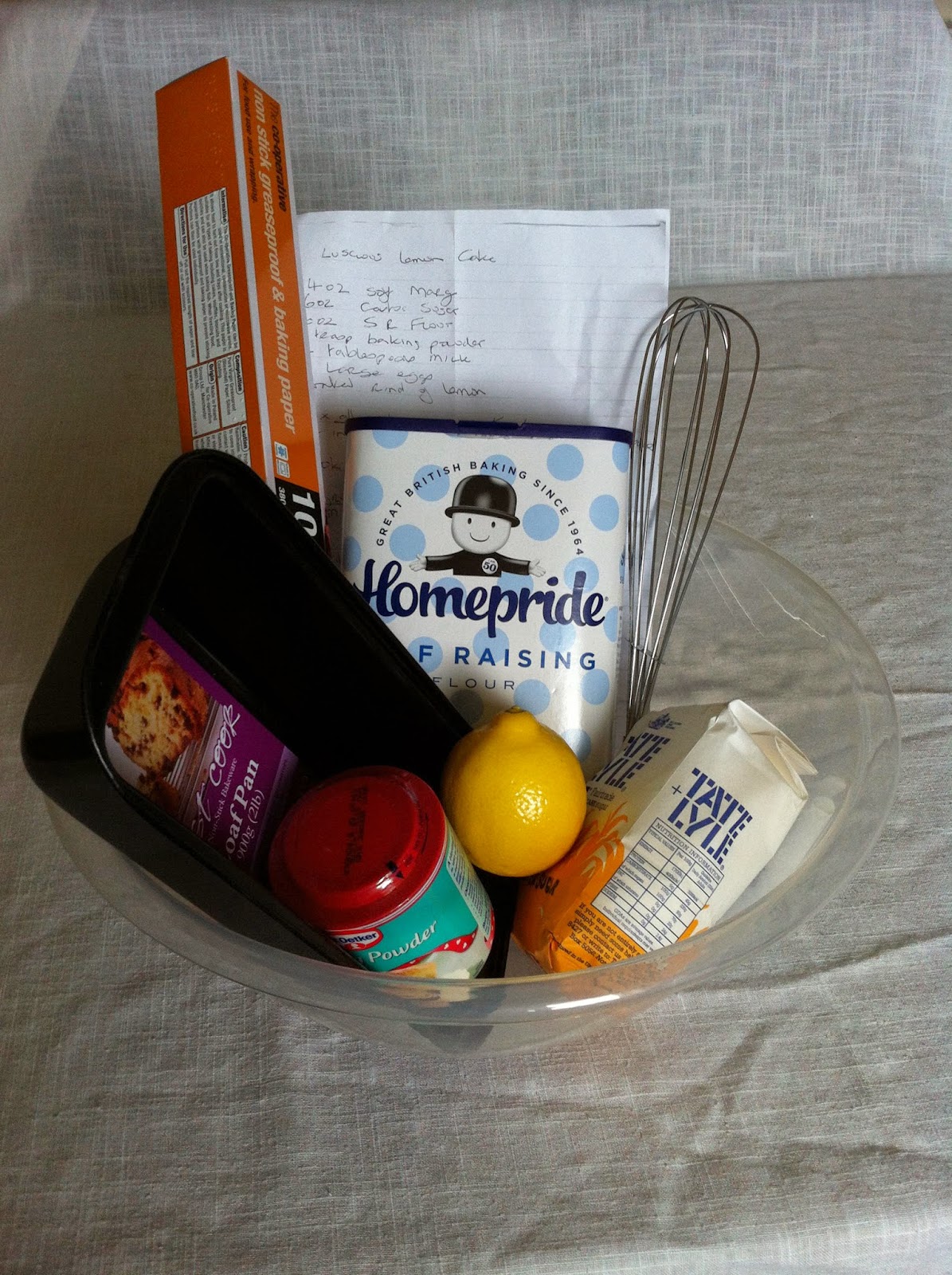 Or to put it another way... 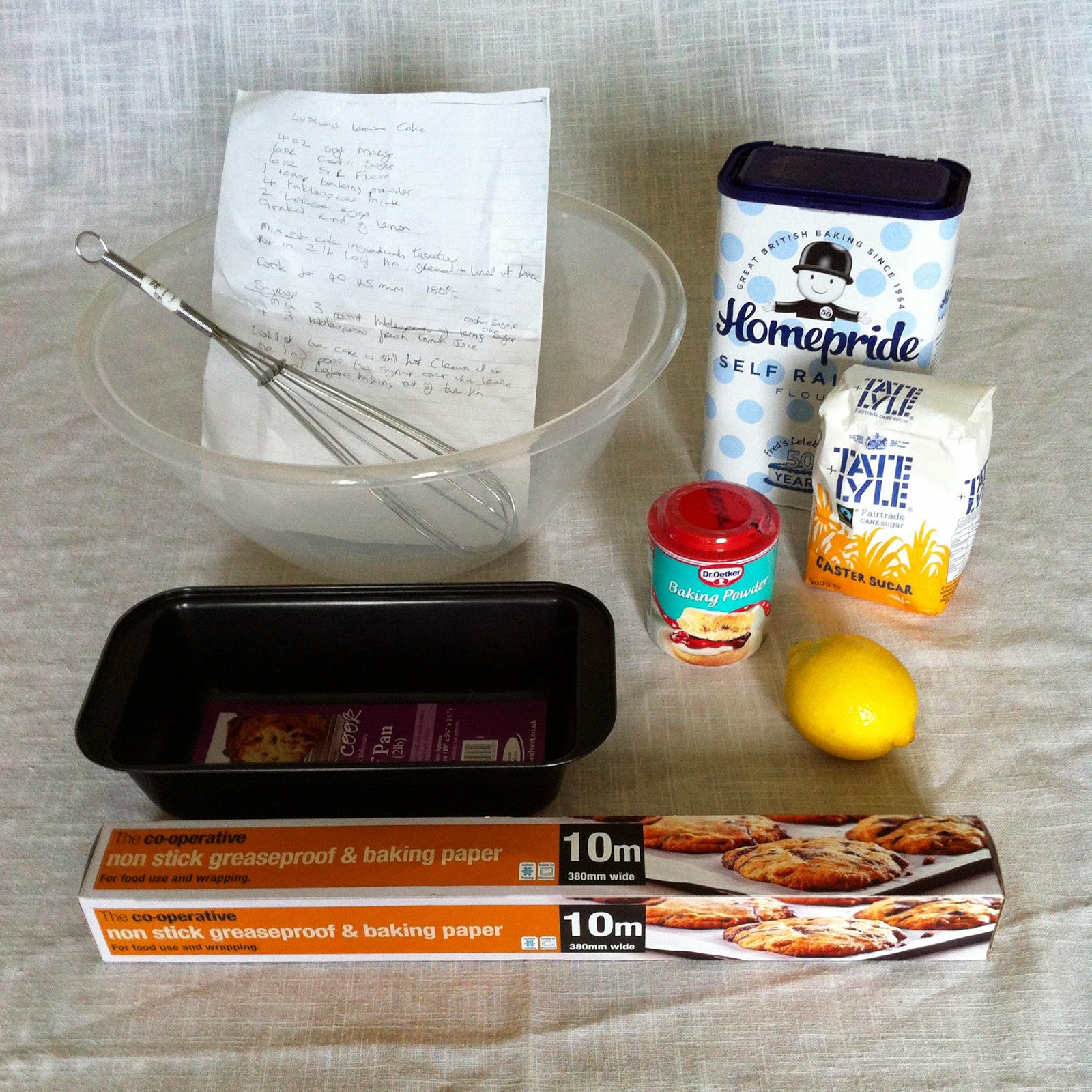 Then, following the instructions implicitly, the quantities were weighed out... 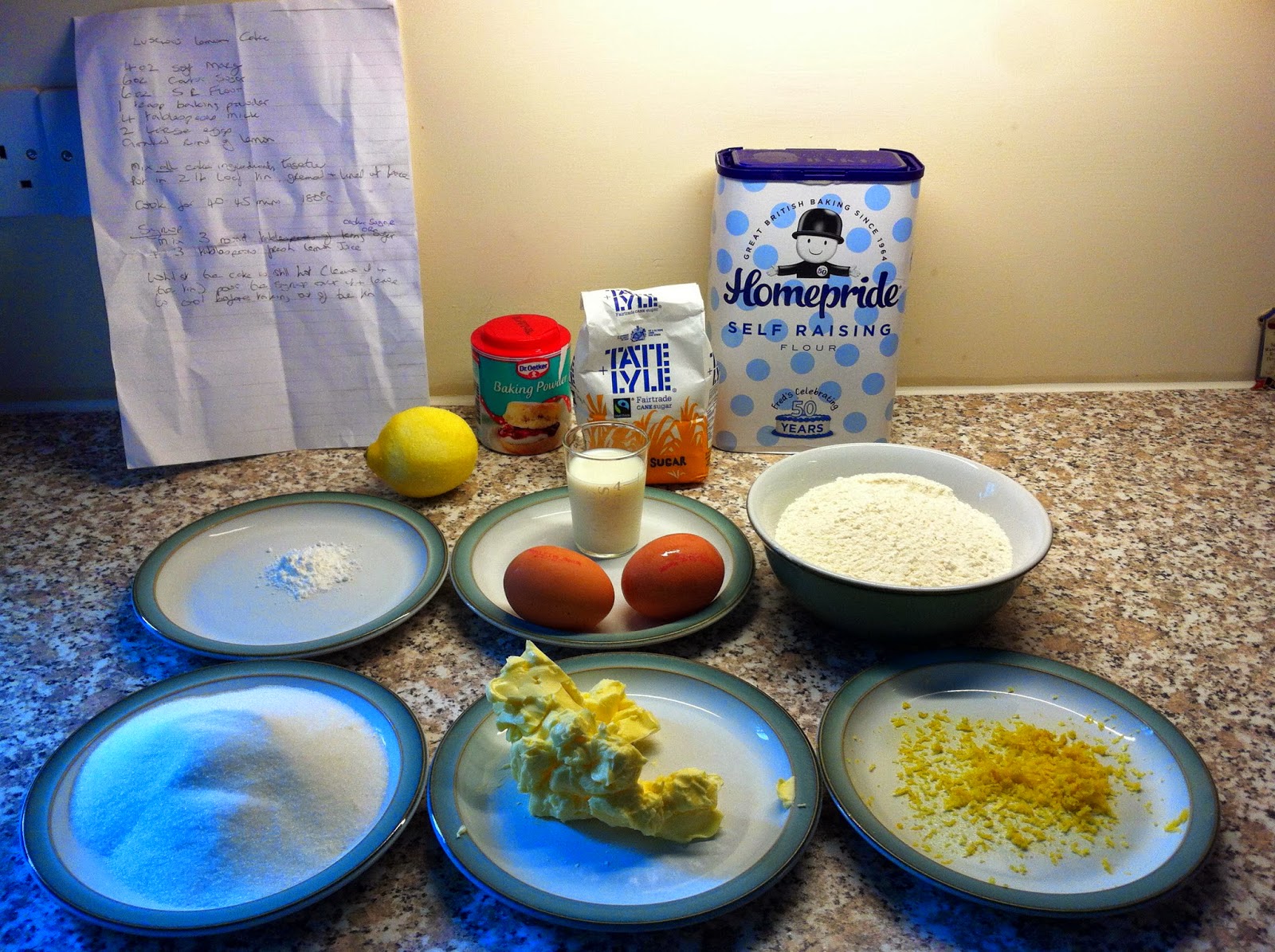 I think I like recipes that more or less say "Chuck most of it into a bowl and stir vigorously."

Which brought things to this point... 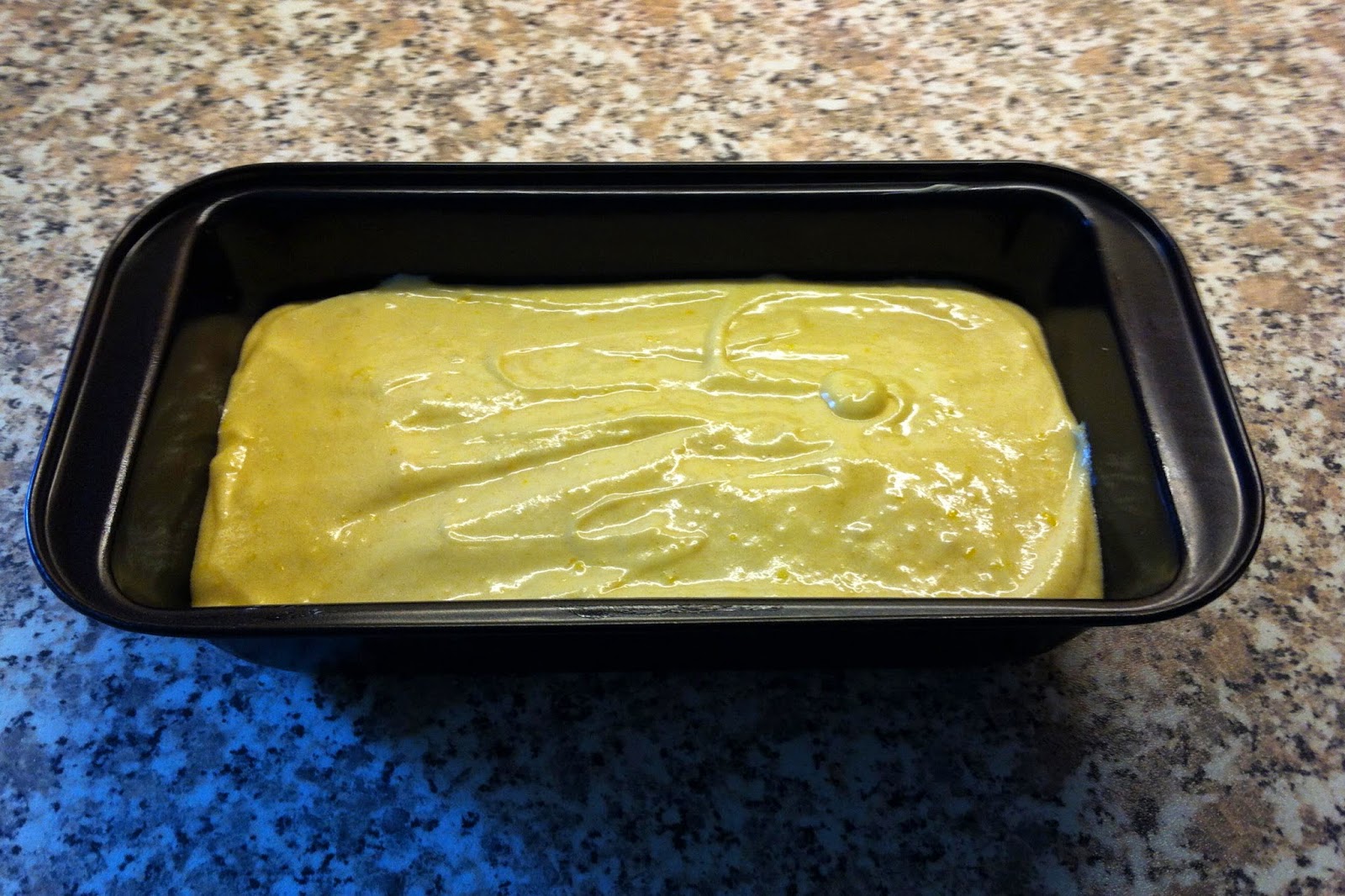 After 40 minutes in the oven, it was time to add the drizzle (which, pleasingly, was made by chucking the remaining ingredients into another bowl and stirring vigorously!). 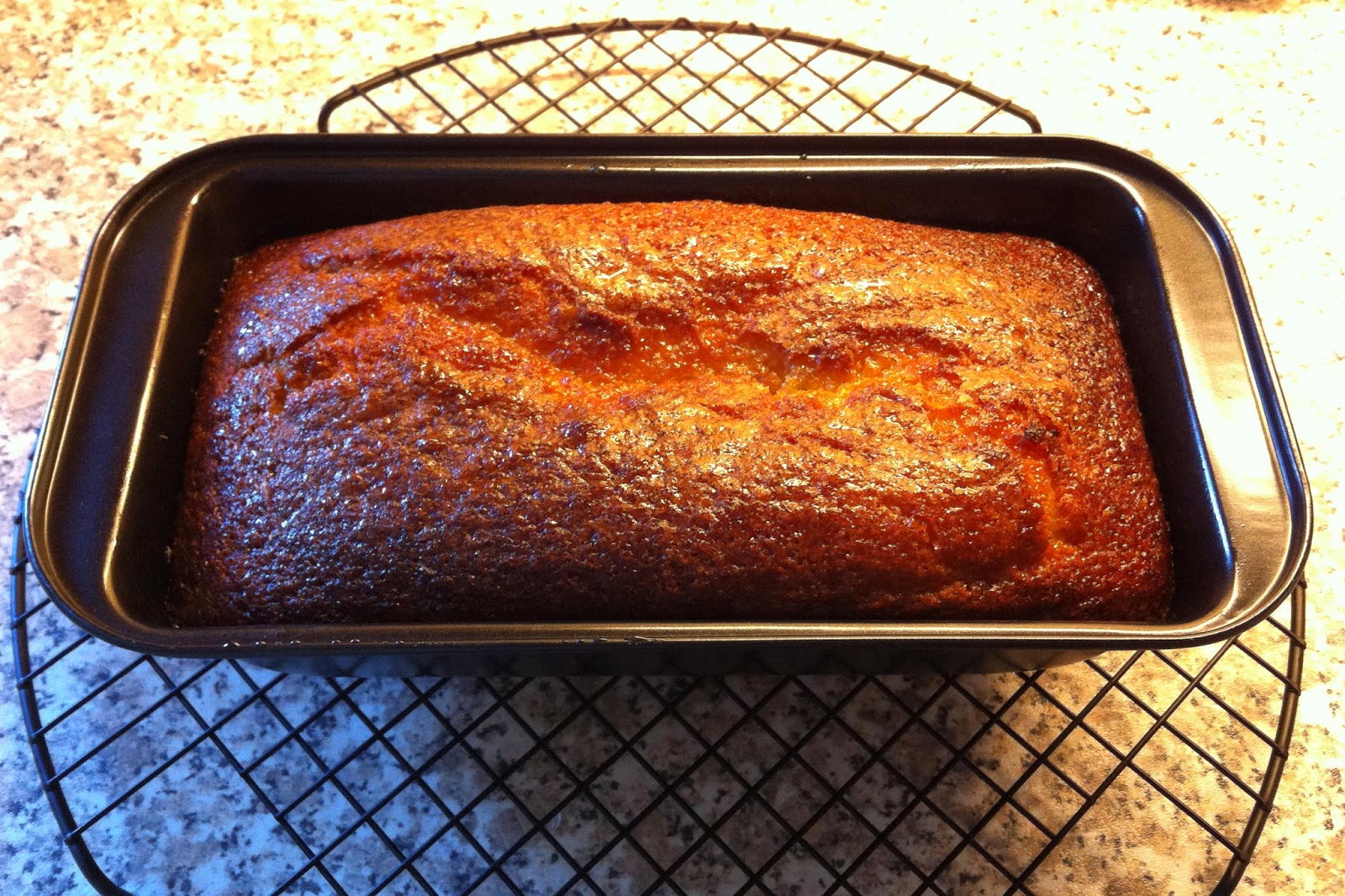 And so, after waiting patiently for Our Lass to return from work, the tasting could begin. 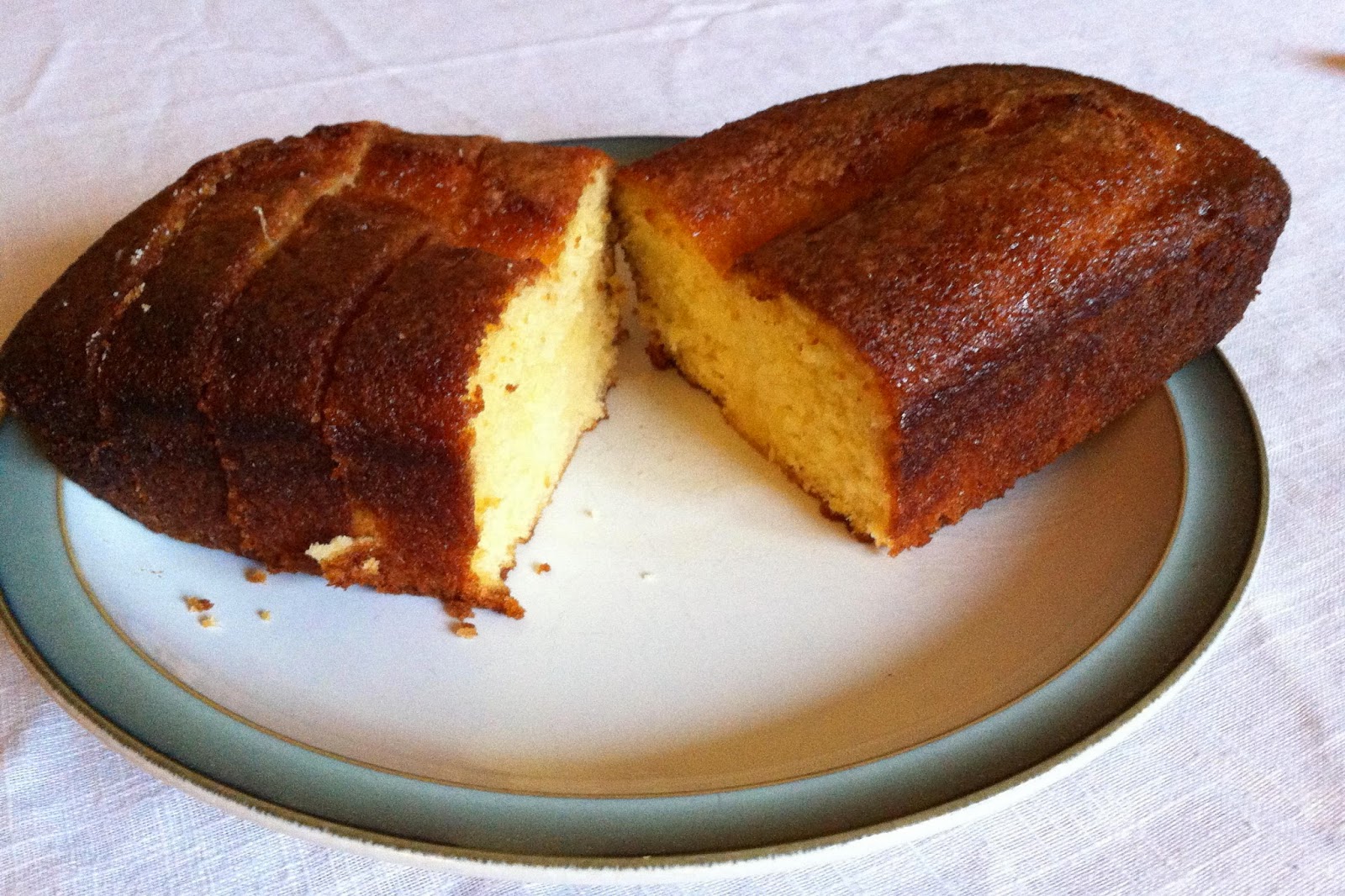 My profuse thanks to Sian for the pastoral support and such a constructive gift.

A few days ago, I mentioned that I was having a go at dismantling a pallet for the first time, despite being allergic to all things DIY. This drastic action was precipitated by Our Lass's requirement for a potting bench, so that she can make best use of any seeds/seedlings/cuttings that come her way.

In all, I had to blitz three pallets which, happily, gave me the opportunity to revise my opinion of the Tense tool-of-choice for this task. Pallets two and three came apart much easier following the tactical substitution of the garden spade for a brick bolster chisel. Much care and effort were still required if the end result wasn't to resemble a pile of splinters, but damage to pallet and Yours Truly was at least reduced to tolerable levels.

The two largest pallets were re-used as the upper and lower frames, the four legs and work surface, with a smaller pallet donating the lower shelf. Wood screws from my Lifetime of Spare Fixings collection were used to fasten all the parts together, though how someone as hapless at DIY as myself could be in possession of so many fixings is a bit of a mystery.

As upcycling projects go, I think this was a success. Our Lass is certainly pleased (it could just be shock that I've constructed something without a visit to hospital). I guess the message here is that if I can do it, then just about anyone can.

It's always good to learn new skills and gain experience. For instance, I didn't realise that three pallets were held together by this many nails. 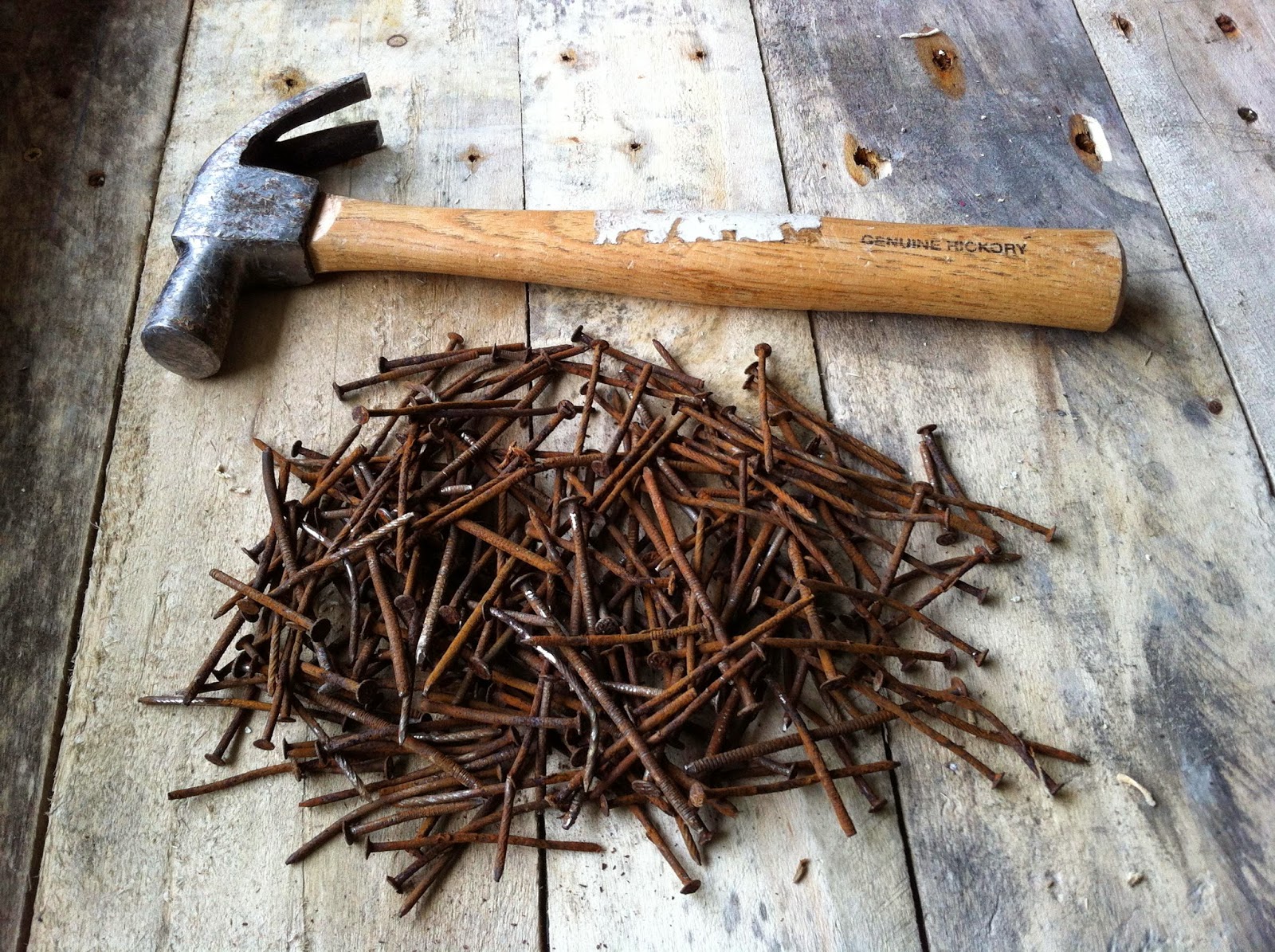 There are also a few intact rails remaining for the next project that gallops over the horizon, as well as a small box of kindling which may end up as a present for some unsuspecting wood-burning stove owner. 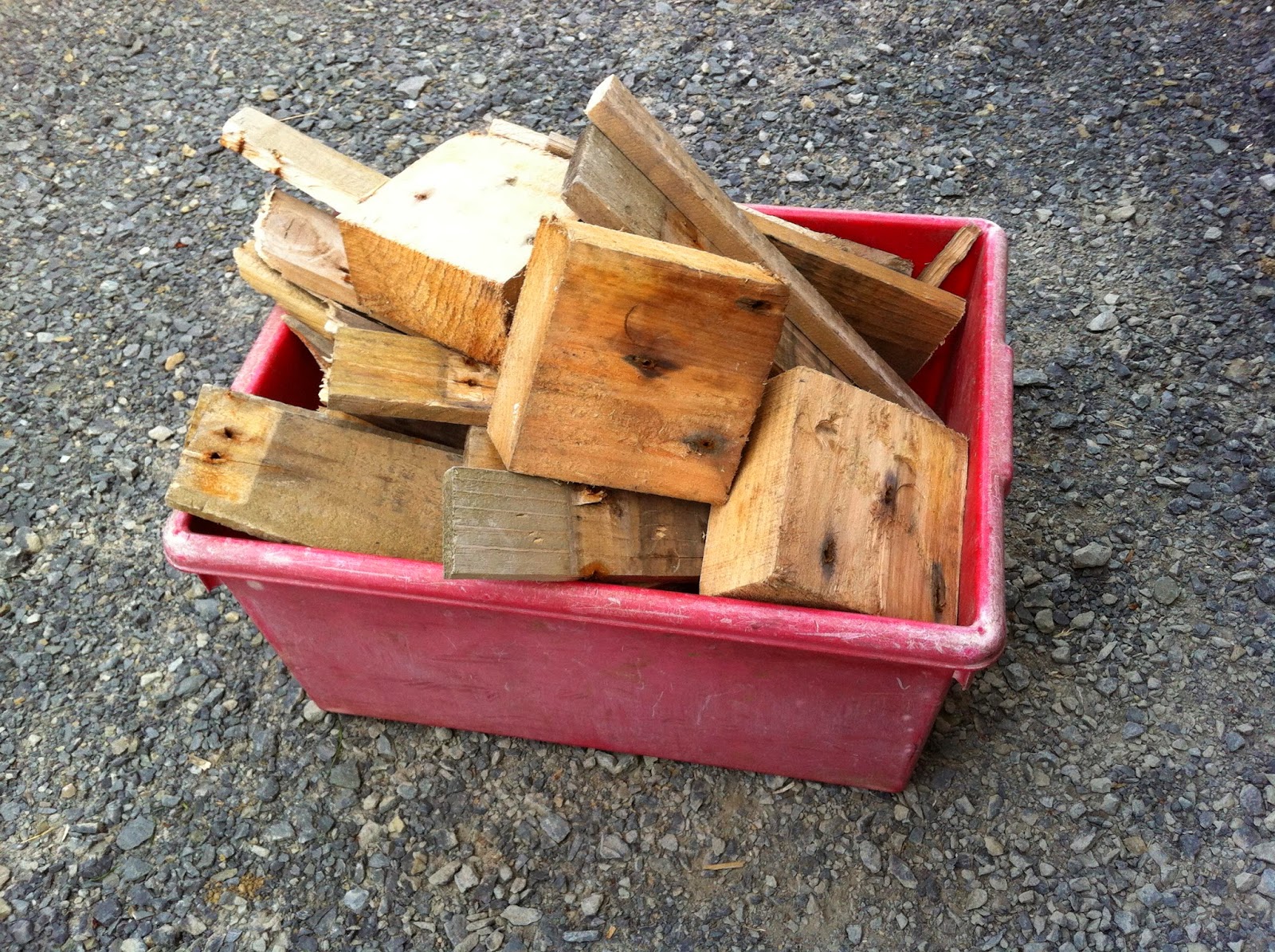 But, finally, here it is, the OTT upcycled potting bench... 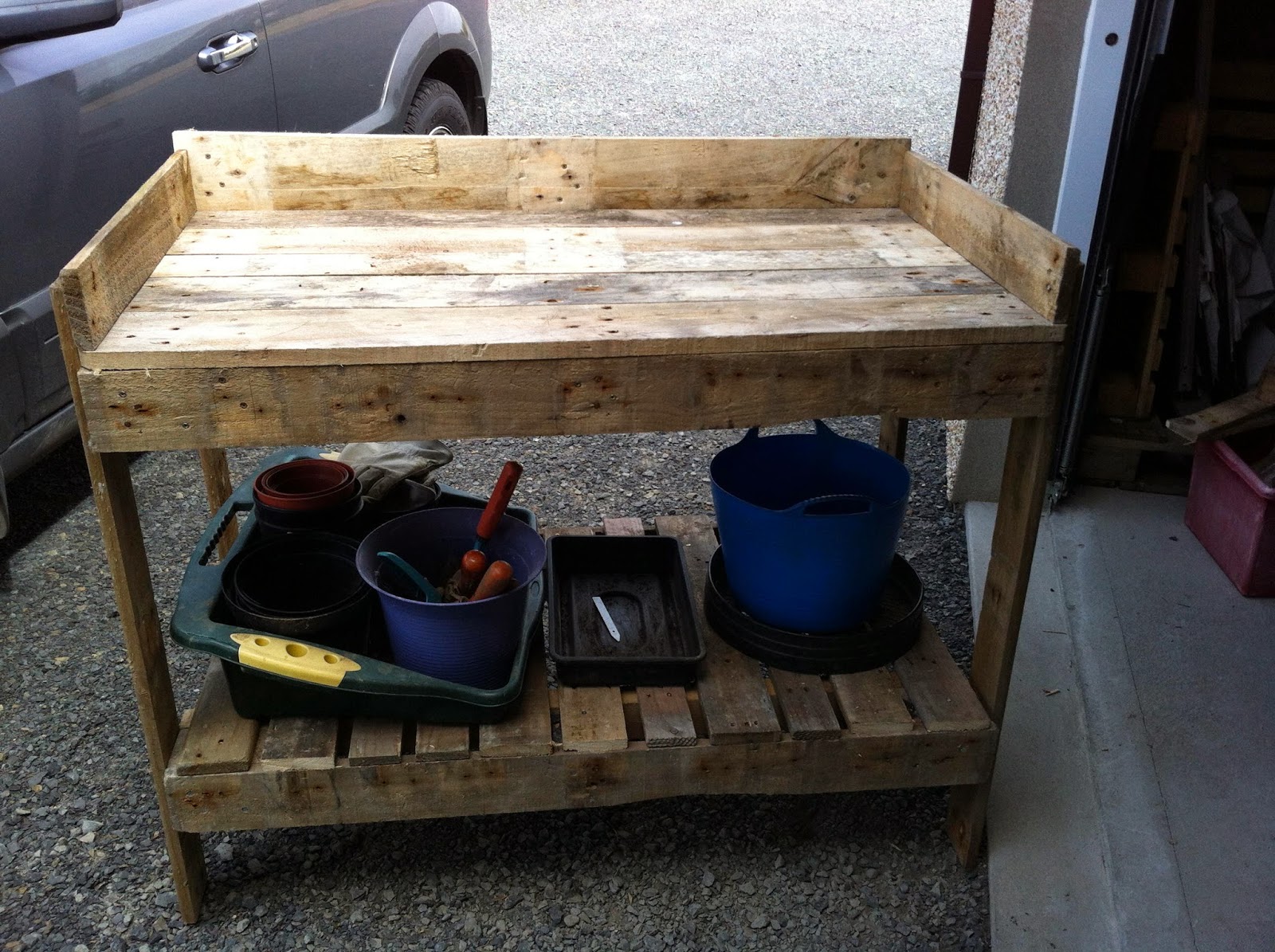 Here's a few photos from the preceding 36 hours at OTT...

On the Orkney Sky Facebook page, I mused upon how this image brought back memories from long ago, of 'building up' the coal fire to ensure that it smouldered through the night, so that it was still alight the following morning.

Another upload to the Orkney Sky page on FB, showing the telecommunications towers on Wideford Hill against the sunset, whilst a mist slowly envelops a farm. 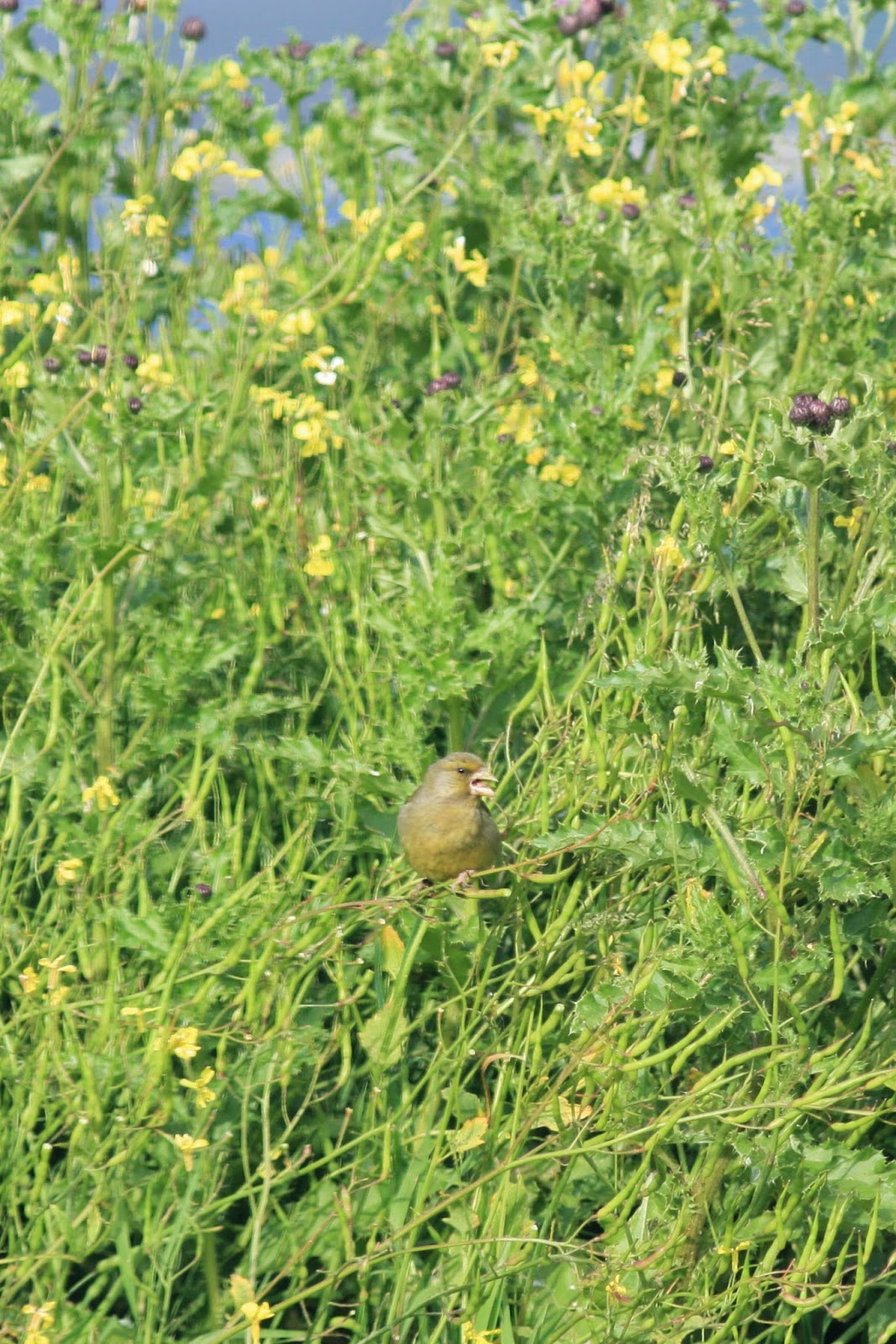 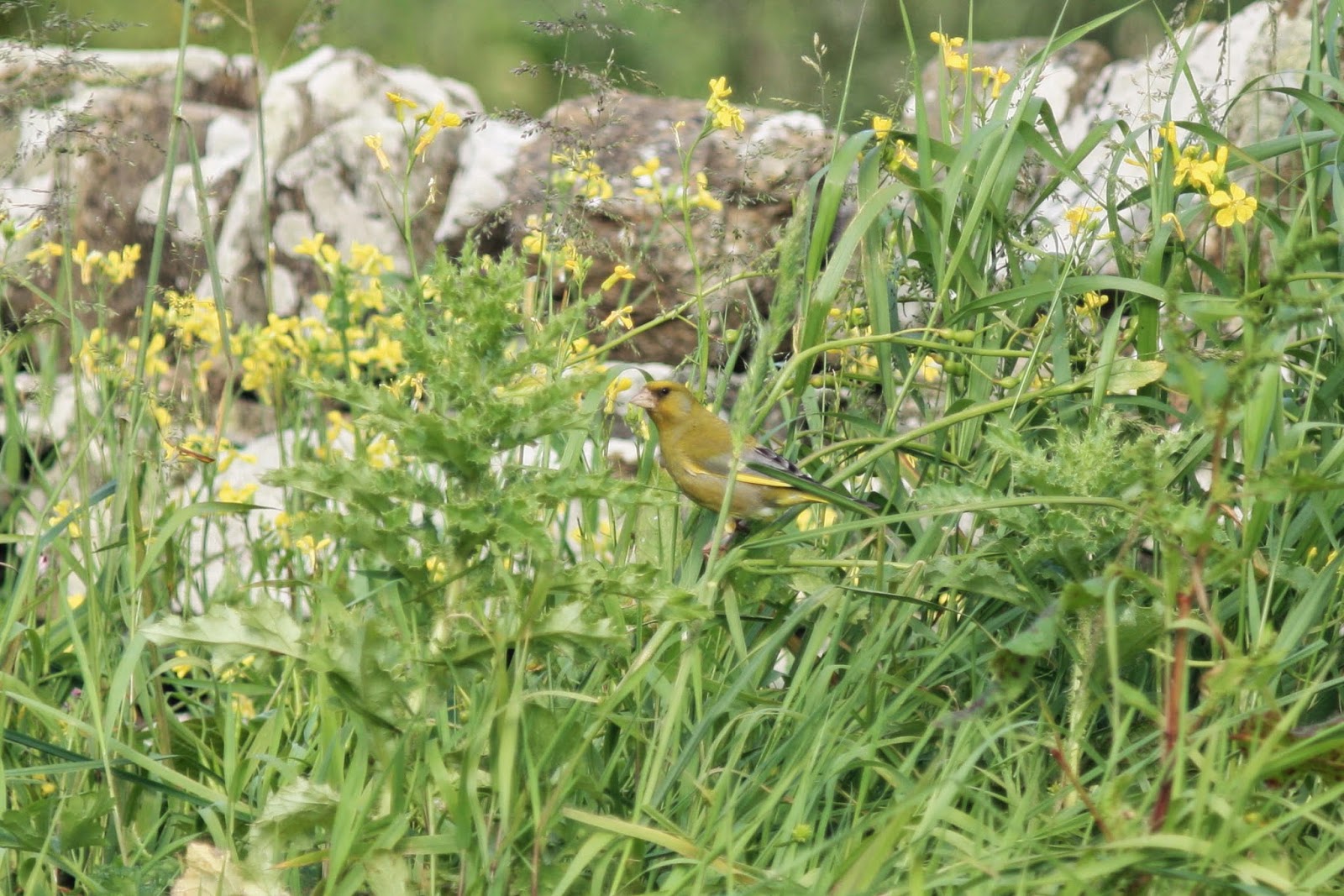 This morning, after breakfast, I was able to take a couple of photos of the Greenfinches in the garden. They're eating the mystery Brassica seeds (and so I suspect that Our Lass will now lobby vociferously to maintain this habitat).

In other news, I note that Kirkwall's predicted maximum temperature today, 16 deg C, is a whopping 14 deg C cooler than that forecast for Milton Keynes (30 deg C). Stay cool, folks.
Posted by Imperfect and Tense at 09:08 2 comments:

Celebrities in the jungle

Just a quick, excited and happy note to say that the wild corner of our garden has had its first 'celebrity' visitors. The unmown section at the front of the house which, for height, is predominantly docks, thistles and the mysterious Brassica species, can now claim to be supporting several Greenfinch.

The vegetation is so thick in this patch that I can't be sure exactly what they were up to, though I suspect it was foraging for seeds on the docks.

Please excuse the OTT response (that's 'OTT' in both its local and broader sense).

Posted by Imperfect and Tense at 08:50 2 comments:

An evening by the pool

A fair proportion of last Sunday was spent with friends in Stromness, dismantling an unwanted greenhouse. The structure is a small, light, aluminium-framed affair, which Our Lass hopes can be re-homed at OTT, though I have concerns that the weather on our windy hilltop will have other ideas.


After gingerly driving back to Holm, laden with about 50 panes of glass, we decanted the contents of the car into a corner of the garage for safe-keeping whilst we figure out where to site the greenhouse.

Now fired up with red hot horticultural enthusiasm like some bizarre personification of Kniphofia, Our Lass suggested that she'd quite like a potting bench built, thank you. In life, you can only play the hand you're dealt, so despite my general loathing of DIY, my expression remained impassive, betraying not a trace of the mixed emotions that the request had created.

A generous neighbour had donated several pallets which, as I was working with minimal budget, at least solved the problem of sourcing construction materials. Not only is the internet awash with a myriad of ideas for re-using second-hand pallets, but also plenty of chuntering about how difficult it is to dismantle one without turning it into a heap of splinters. Suggestions for remedying this problem included sawing off just the bits that weren't nailed down or giving up and buying some decent wood instead. Neither of these ideas were an option for me, as the proposed bench height required the full length of a pallet rail. Yippee!

In the absence of a tyre lever or similar, my first few attempts were pretty disastrous. Actually, make that unprettily disastrous. However, whilst trying to come up with a scheme for removing the nails without collateral damage to the rails, I happened upon the Tense tool-of-choice for pallet deconstruction.

In combination with a couple of screwdrivers, a claw hammer and Yours Truly at the end of his tether, the spade provided sufficient leverage and spread of force to minimise the carnage. Once my wounds have healed and the bruising's subsided, I may even take photos.

Er... the pool? Oh yeah, nearly forgot! In the evening, for a bit of respite from all the yelps of pain and disgruntled swearing, we wandered down the road towards St Nicholas' Kirk. It was low tide in Holm Sound, the rocky foreshore populated by slovenly young gulls, Oystercatchers busy bathing and the occasional Curlew picking its way through the seaweed.

On the landward side of the road, a freshwater pool was teeming with bird life, most of it nervous of our presence. To save the various bundles of feathers any further anguish and also our ears from the constant shrieking calls of anxious Redshanks, we hit upon a bit of a ruse.

Hightailing it back to OTT, we jumped in the truck and then drove back down to the pool, parking on a piece of solid ground on the opposite side of the road, but facing the sea. The rear windscreen in the tailgate can open separately from the whole door, so this we did, and in combination with the fact that the rear seats were folded down from the day's greenhouse adventure, voila, instant hide!

We were able to watch plenty of ornithological activity without distress to any party, the low evening sun adding the finishing touch to the scene.

The pool was full of the fledglings of Redshank, Lapwing, Moorhen, Mallard, Teal and Pied Wagtail. Swooping low over the water, Swallows and House Martins dipped their beaks into the cool liquid. A Snipe watchfully stepped out from the vegetation at the edge of the pool and probed for morsels of food in the mud. In an adjacent meadow, a pair of Brown Hares casually lolloped through the lush, green grass, seemingly without a care in the world. However, I suspect that they were as ready as ever to scarper should the need arise.

Admittedly, it wasn't the most comfortable of hides, so after a while we carefully stretched our aching joints and clambered back into the front of the truck. It was only then that the thought struck me, what did the neighbours think we were doing?
Posted by Imperfect and Tense at 09:36 2 comments:

The insidious effects of my ongoing battle against the Broad-leaved and Curly-leaved Dock in our garden are beginning to seep into all aspects of my life.

Whilst out on a cliff top walk with Our Lass, a few weeks ago, my Dockism momentarily turned into Impressionism through the medium of my phone.

Posted by Imperfect and Tense at 21:57 No comments:

Last Wednesday's wordless blogpost and the rather more wordy Comments section that accompanied it, featured a small part of the view from our doorstep.

In the Comments section, I mentioned that weather often intervenes in the visibility of this view.

Today is a case in point. Gorgeous sunshine all the way back, during my drive home from Kirkwall. Indeed, OTT was still bathed in solar radiance as I fired up the lawn weed mower. In fact, we've had some excellent weather over the last four days.

But essentially encompassing the same view. 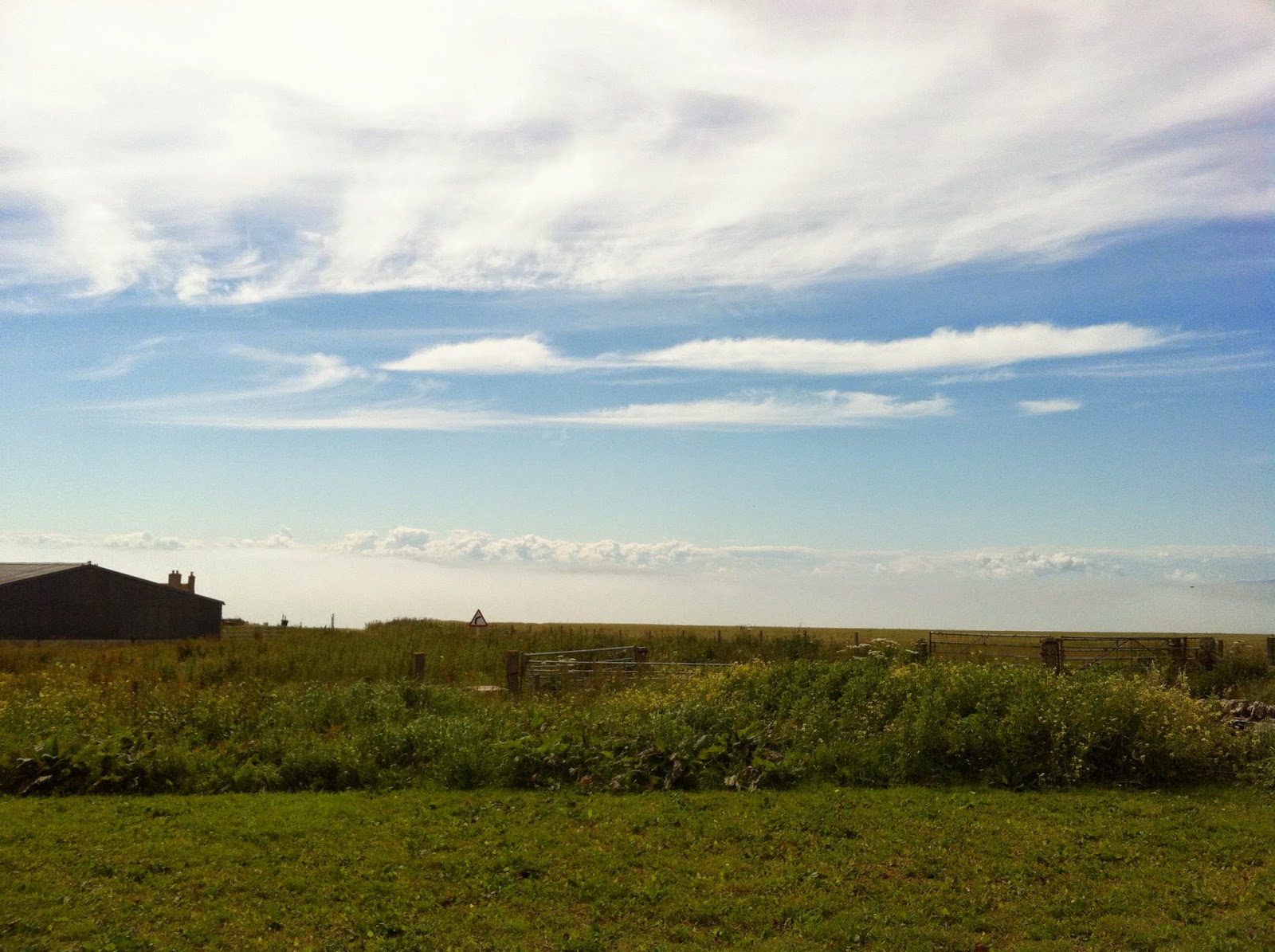 The most striking thing about this photograph is the demarcation between mown weeds and unmown weeds, don't cha think?

But returning to the point, here's the bit to compare with last Wednesday... 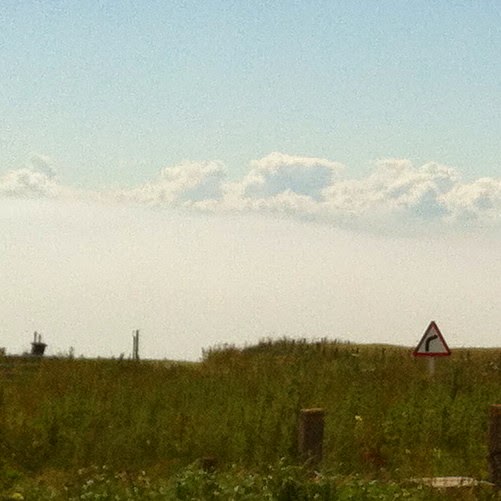 No Dunnet Head, no Pentland Firth, no Scapa Flow, no South Ronaldsay, no Glimps Holm, no Lamb Holm, no Holm Sound.

Just the meadow at the end of the world.

Yep, a couple of days of sunshine and we're guaranteed a haar.
Which does have a sort of nautical, piratey ring to it, eh? 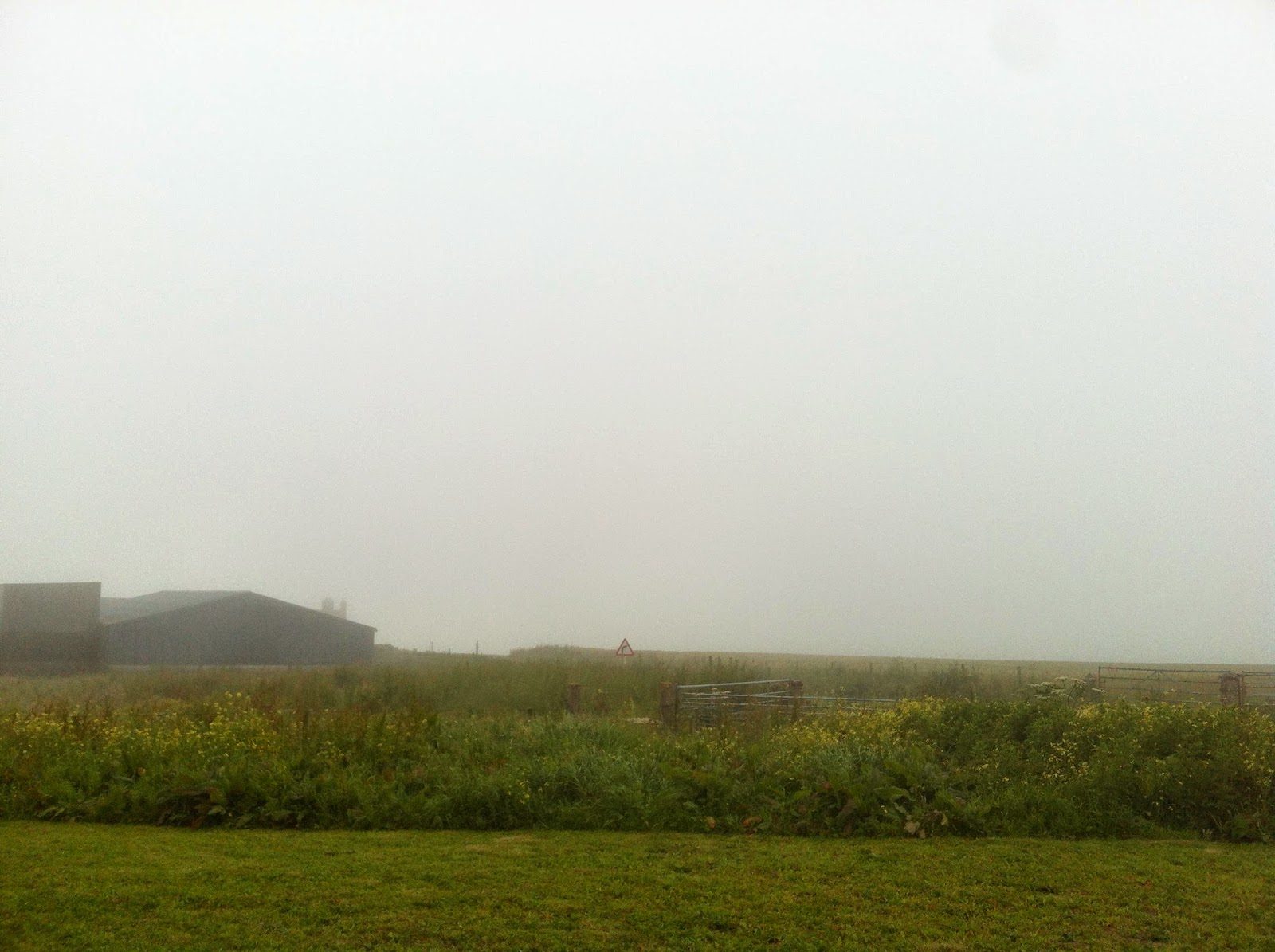 Posted by Imperfect and Tense at 17:03 4 comments: 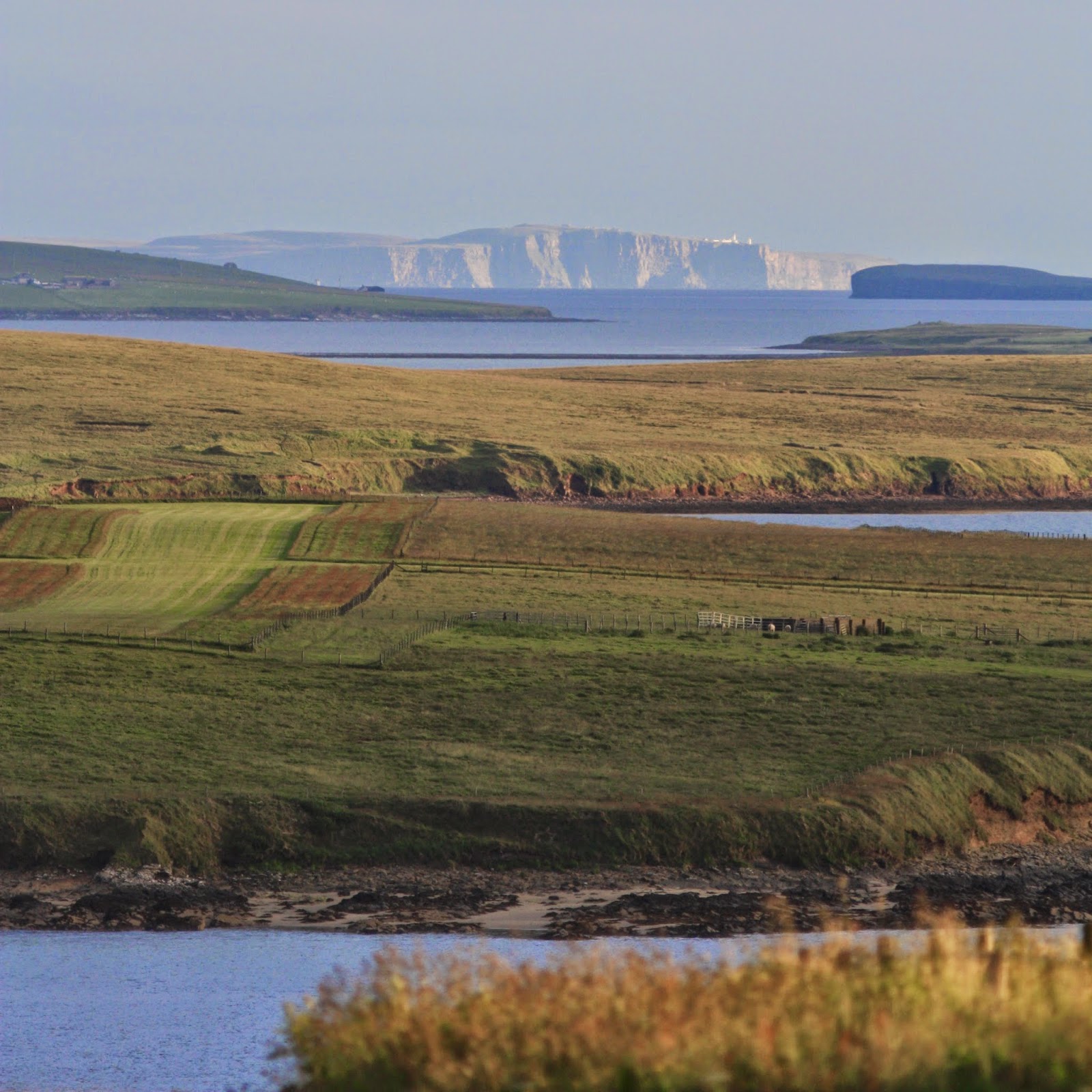 When, in the months ahead, the double misery of horizontal rain and biting windchill causes my cheery disposition to descend into a numbing despair, please remind me of this day.

A warm sun and a gentle breeze gave me cause for a momentary pause amongst the wild flowers growing in my workplace...

Posted by Imperfect and Tense at 09:25 4 comments: