A Really Brief History of Time

Wildlife watching opportunities have been a bit thin on the ground since my previous post. I did spot a Common Darter in our garden last weekend, "obelisking" into the sun during a brief hot spell. It's a very striking pose, which reminds me that, this winter, I should make the time (no pun intended) to design a dragonfly sundial. Later the same day, we ventured to the local reserve for an hour or so and recorded our first Migrant Hawker of the year. A nice male, roosting in the low afternoon sun. That brought my year list (sad, I know, but I'm a slave to my hormones) to a total of 25, which is my usual figure. Missing that Broad-bodied Chaser sighting now, eh, my lad? 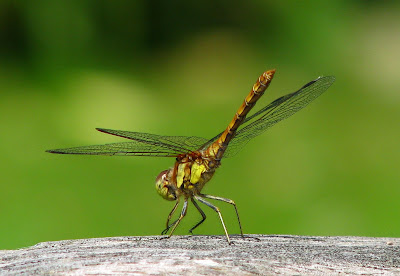 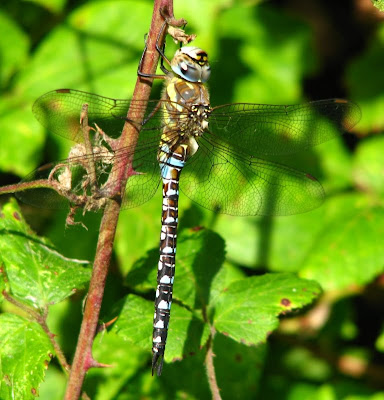 Today being the first day of the Bank Holiday, I somehow managed to wake up at the normal time. How does that work? Monday to Friday, I'm rudely awakened by the alarm clock, wrenched from a pleasant somnolence by its strident tones. On a day off, Dink! my eyes open at exactly the same time without any explanation and I'm back in the land of the conscious. Grrrrr!

As the forecast was for sunny spells, we drove to Clifton Reynes and pottered about for an hour or so through the village, along the hedgerows, down to the river and back again. This produced a few Southern Hawkers, Migrant Hawkers, Common Darters and Banded Demoiselles, so we felt that we deserved a pub lunch. I can whole-heartedly recommend The Robin Hood Inn, excellent nosh. Now rather full and not a little tipsy, we wandered vaguely over the fields to Newton Blossomville, encountering more Common Darters, Migrant Hawkers and a Brown Hawker on the way. Our return, via Clifton Spinney, was enlivened by the flypast of a Spitfire and a Messerschmidt, aerial predators of 70 years ago, rather than the ones from 350 million years ago that we normally watch.

Posted by Imperfect and Tense at 18:39 No comments:

Whilst at my desk this afternoon, I became aware of some wildlife excitement just outside our office. It was apparent that there was a large insect flying around, which, to be fair, is more temptation than a fully paid up member of the British Dragonfly Society can be expected to ignore. Needing no further encouragement, I sidled (ok, ran) out of the building with a list of possible species scrolling through my head.

It soon became apparent that this was no dragonfly and a discussion ensued as to whether it was a Hornet or not. I thought "not" as even with it zipping around above our heads, it did not seem yellow enough. It was big enough though, which puzzled me. Not an odo, probably not a Hornet.

Then it landed on me. Definitely not a Hornet then, but, my, look at the size of that ovipositor. At...least...I...hope...that's...an...ovipositor.

Fortunately, it then flew off again, but I was able to snap a pic when it landed on a vehicle. 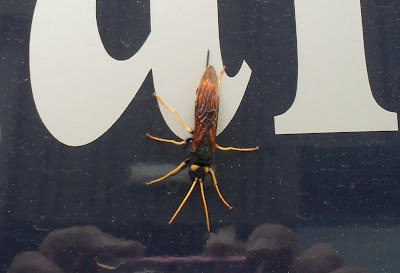 Now I know what you're thinking. The big girl's blouse has a pink camera! Sadly not, dear reader, now please concentrate on the teensy insect inches from my hands.

As a Google image search might tell you, if you happened to enter the words "large yellow insect with ovipositor uk", this is a female Greater Wood Wasp or Horntail. She's 4cm long and is actually a sawfly. Despite being quite harmless, she does makes you glad you're not a tree. After terrorising a few more humans, Mrs Horntail was last seen in combat with a rather brave and normal-sized wasp and we returned to our everyday activities, feeling a little less removed from Mother Nature.
Posted by Imperfect and Tense at 20:05 4 comments:

We were in a bit of a quandary. We thought we'd have a family weekend to celebrate Ruth's 21st birthday, just the four of us, somewhere in convivial surroundings, that would be suitable for a hiking, costume drama loving lass. But where?

The Peak District seemed to fit the bill, a place that I can't say I'd visited since the Army sent me to walk the Pennine Way. Not that you'd catch me doing that again. Some of those stiles are a right faff in a bustle.

Being ever topical, we settled on a B+B near Eyam, a village where the concept of a "flu friend" never really caught on and anyone making stupid jokes like that would be sent away with a flea in his ear.

The B+B was excellent, with walks from the door, so on Saturday we set off on a 6 mile circular potter taking in Bretton, Abney, Eyam Moor, Eyam and Eyam Edge. Only one of our number is used to regular lumps of altitude (I very nearly wrote "attitude" there), so the birthday girl got the map and led the way.

The only thing that was wuthering on the heights was my stamina, and when MGLW spotted a dragonfly hawking across the moor, I was particularly keen to stop and photograph it. It was the only dragon of the weekend, but I was chuffed to record a male Common Hawker.

When we reached the village of Eyam, our route took us through the churchyard. It was a lovely day for a wedding too, though the photos with four dishevelled walkers in the background mightn't make it to the mantlepiece. I did say "costume" and "drama".

The museum exhibition showing the extent of the tragedy that befell the village during the Plague was a salient reminder of our fragile tenure on this Earth.

Sunday saw us making a beeline for Haddon Hall, a gem of an English House from the Middle Ages. It has featured in the film version of Pride and Prejudice, the Beeb's Jane Eyre and more recently The Other Boleyn Girl. Never mind all that palaver, here's the bee...


... possibly a leaf-cutter, I dunno. Incidentally, the Beeb's Jane Eyre had a wonderful scene by the river, featuring a female Banded Demoiselle (though not at the correct time of year!). Let it go, Graeme, let it go.

Whilst we wandered around the gardens together, MGLW twirling her parasol and smiling coyly from behind her kerchief, we were apprehended by, what I at first took to be, a somewhat diminutive policeman. On closer inspection, it turned out to be this Small Copper butterfly. After lunch, we drove to Kedleston Hall, near Derby, where many scenes from The Duchess were filmed. Mind you, when you've seen one elegant neo-classical mansion designed by Robert Adam and set in beautiful parkland, you've seen them all. The costumes on display were both elaborate and exceptionally small-waisted. That Knightley lass needs to get herself off to the National Trust tea room in the West Wing for some proper nosh.
Posted by Imperfect and Tense at 20:58 No comments: 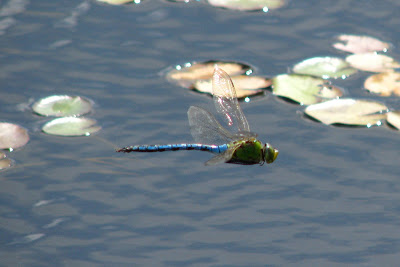 
Along with some Common Darters, a late emerging Four-Spotted Chaser, and a handful of Common Blue, Blue-tailed and Emerald Damsels, that was about it. Though shortly after putting up a couple of Hares by a stream, we did find an exuvia which turned out to be a Golden-ringed Dragon, but sadly there was no sign of its previous occupant. Still, it's good to know they're there somewhere.
Posted by Imperfect and Tense at 21:55 1 comment: