If you've been wondering where old Tense has got to, don't worry, we're just experiencing a temporary bout of internet outage. Well, I say, temporary, but the sad fact is that following nearly two weeks of thunder and lightning in Orkney, there's rather a long queue to gain access to a BT engineer. To be honest, the reported number of lightning strikes per hour was some huge figure, so if the only damage is a bit of wire, it could be said that we're lucky.

The earliest consultation will be on 15th January, but that's just to investigate and, hopefully, diagnose the problem. A full repair may take longer :o(

This past weekend saw a return to more normal, changeable weather. Our Lass and I took the opportunity to have a walk around the local loop as a low key celebration of the Winter Solstice.

Impulsive and spontaneous are two words that aren't often uttered in the same sentence as His Tenseness, so to general shock and awe, we walked the loop in the opposite direction. The slightly different views that this presented were interesting. As we descended the gentle hill from Greenwall, looking across to Rose Ness, I was reminded of a chance meeting the previous weekend with an archaeologist from the college in Kirkwall. On hearing that we lived near Rose Ness, he explained that he had been surveying that area this year and discovered some new features.

The only obvious earthwork, to our eyes, is a small, incomplete mound, so I asked if this was likely to be from the Neolithic, the First/Second World War or somewhere in between. His reply was that it was the former, but more exciting still was the information that the old beacon further along the promontory was stood on a previously unrecorded Neolithic earthwork.

This thought was in my mind as I scanned the view from Rose Ness, to our left, across the ruined broch by the edge of the bay and around to our right, where the present day church of St Nicholas' Kirk stands. On a mound.

Yes, walking in the opposite direction did give a different perspective of the topography. So I'm a bit keen to be reunited with the internet to continue informal investigations.

Meantime, many thanks to Orkney Library and Archive for coming to the rescue, in the shape of their excellent computer room.

Posted by Imperfect and Tense at 15:41 No comments:

Just over a week ago, I asked a question on this blog based on the identity of the birds visiting Tense Towers.

As I admitted at the time, it wasn't hugely scientific, but it did set an interesting challenge. Three readers accepted the mission to ID the eleven species and I thank them all for the time and effort that they put into the task.

In a time-honoured procedure, I will now pointlessly build in 'tension' and 'drama' by offering up some thoughts on the quiz before finally revealing the answers and the winner.

Interestingly (at least for me!), the three contestants are very different in several respects:
That said, the spread of results was small, only 2 points separating first and last, which either goes to show that it was a bonkers question in the first place or, as pointed out previously, it isn't very scientific.

So, "Jolly Well Done!" to all participants!

Well, there was a tie for first place, with 6 correct answers.

But I think I'm going to reward all participants with a calendar, for entering into the spirit of the thing and spending some time thinking about Nature.

A 2015 calendar, featuring twelve images from this blog during the past year, will soon be on its way to each of you, Martin, Martin and John!
Posted by Imperfect and Tense at 12:33 6 comments:

He's not a weather bomb, he's a very naughty storm!

The last few days have seen a vast and all-encompassing threat descend upon the British Isles. I refer, of course, to the media frenzy regarding the 'weather bomb' storm that made landfall yesterday, beginning in the far north west.

As far as Orkney is concerned, strong winds are a way of life, with the consequent hazards, and their subsequent mitigation, just a necessary part of living at 59 degrees North.

For OTT, this has meant one foray out into the garden to remove a large sheet of soggy bale wrap from the barbed wire fence that separates us from the neighbouring farmer's field. I'm sure it is slightly easier when it's not blowing a severe gale, but it probably made amusing viewing for anyone fortunate enough to spot my attempts to extricate it as I didn't wish to risk the whole fence disappearing eastwards at a great rate of knots.

What has been unusual though, is the sheer quantity of thunder, lightning and hail that we've been experiencing. This began on Sunday afternoon and the squally showers haven't really stopped since. Our Lass and I watched one thunderstorm traverse the length of Hoy, then hop over Hoxa Sound to continue its journey down South Ronaldsay.

So here we are, five days later, and there appears to be no let up in the amount of hail that is scudding Orkneywards.

The only downside to this is our letter box. It appears to be under the mistaken belief that it is some sort of water transfer system, rather than a portal for mail. I had carried out some remedial work on it in late Summer, with a tube of silicone elastomer gunk, but the dryish Autumn obviously lulled me into a false sense of security, as this week has seen a veritable torrent pouring through the door. A torrent only partially matched by my dark and profane utterances at the damp situation.

Of course, until it actually stops raining water and ice from the sky, there's very little chance of successfully fixing the problem. And the weather forecast gives very little hope in that regard.

Last night, I cooked a sausage casserole, as the time seemed right for some Winter comfort food. Seasonally, I look forward to celebrating the return of the parsnip and the Brussel sprout. Nom, nom,nom.
Posted by Imperfect and Tense at 15:28 2 comments:


Please be re-assured that entries are accepted from folk who have other names.

Here's a taster of what you're competing for... 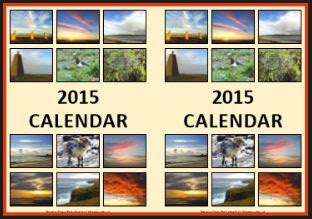 There's still a few days left to send in your thoughts as to the identity of the eleven species seen in our garden in Milton Keynes and Orkney.

Posted by Imperfect and Tense at 07:42 No comments: 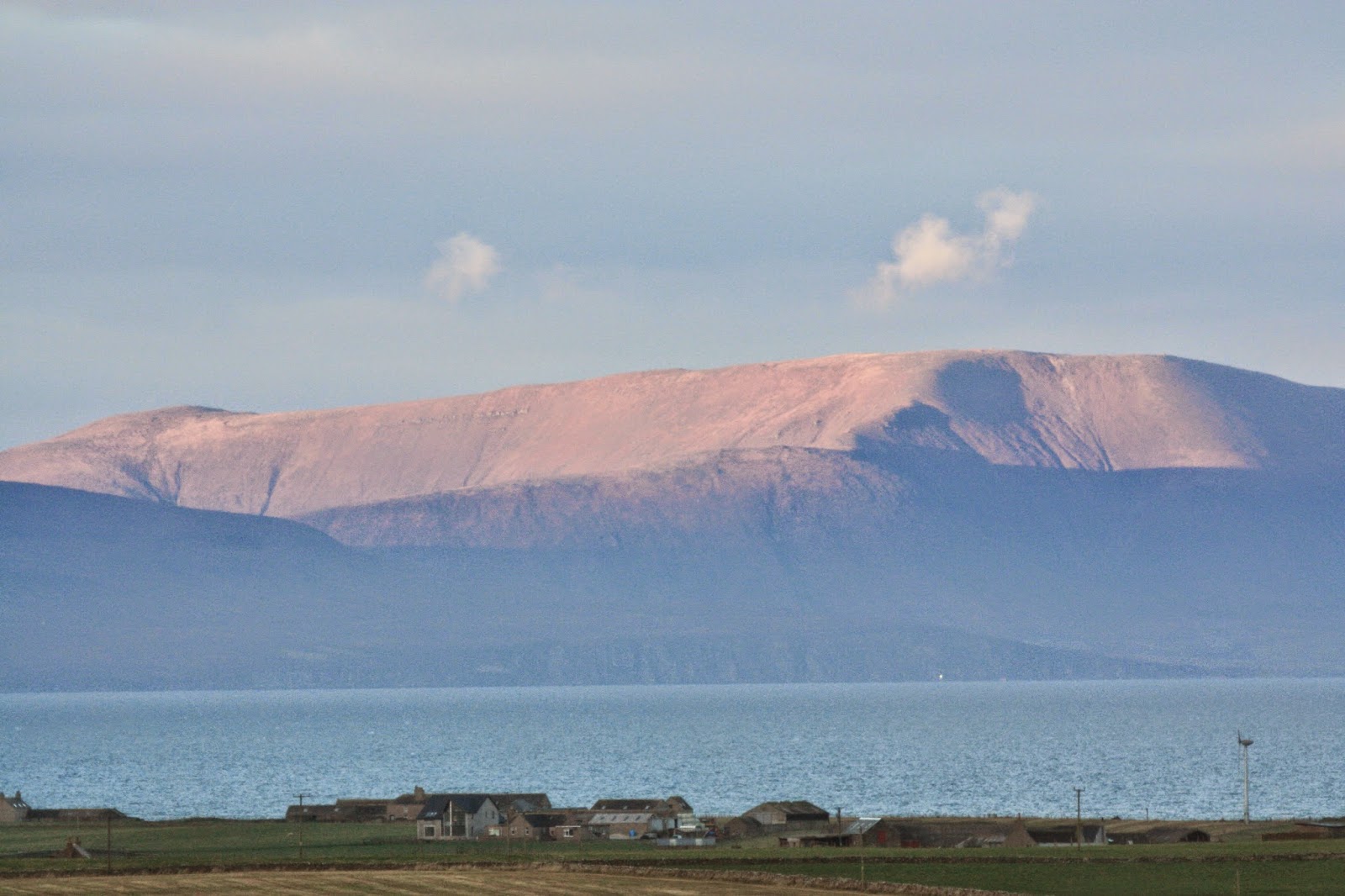 Shortly after sunrise on the 4th of December, the morning light picked out some landscape features on the tops of the distant Hoy hills. 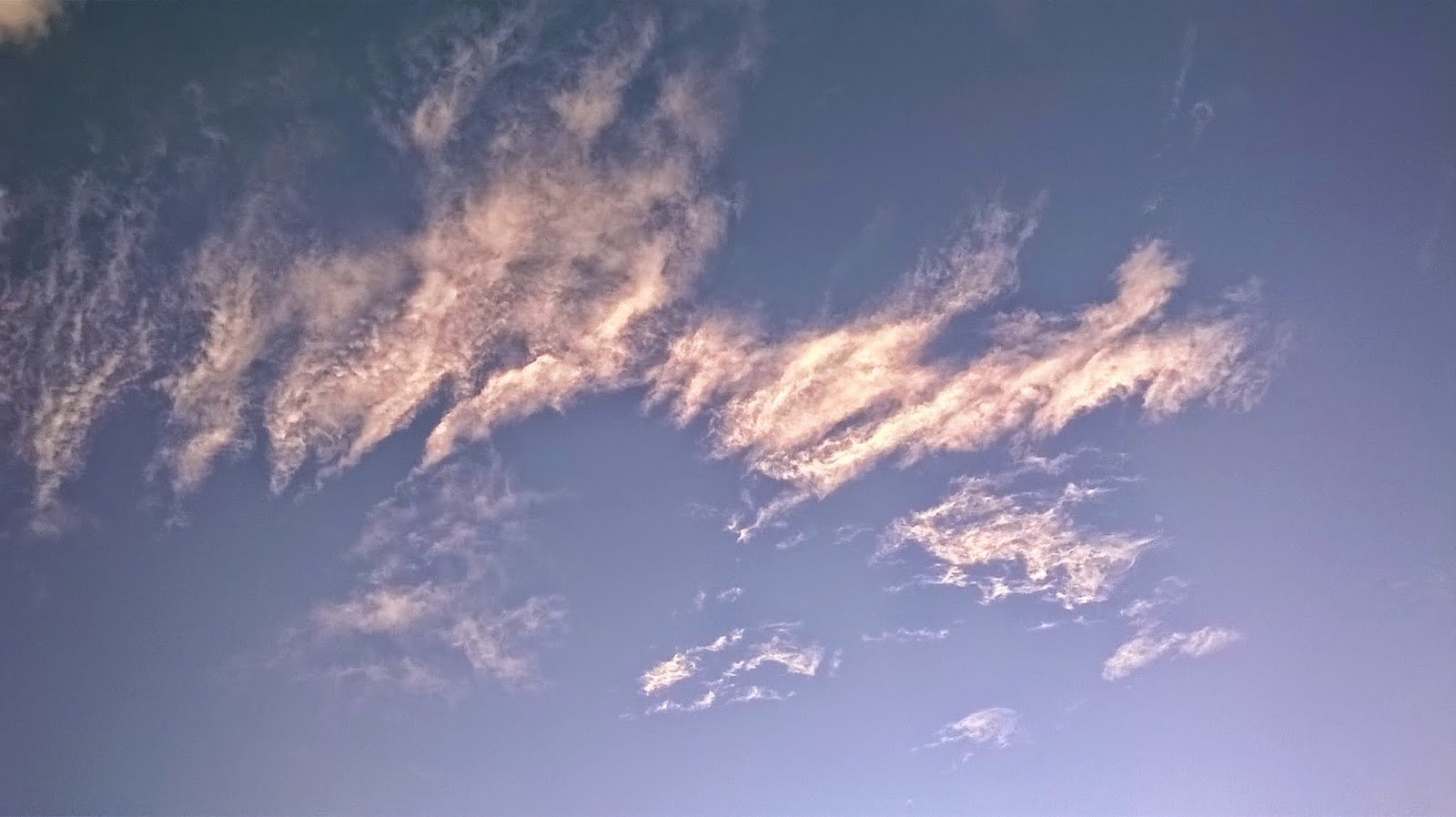 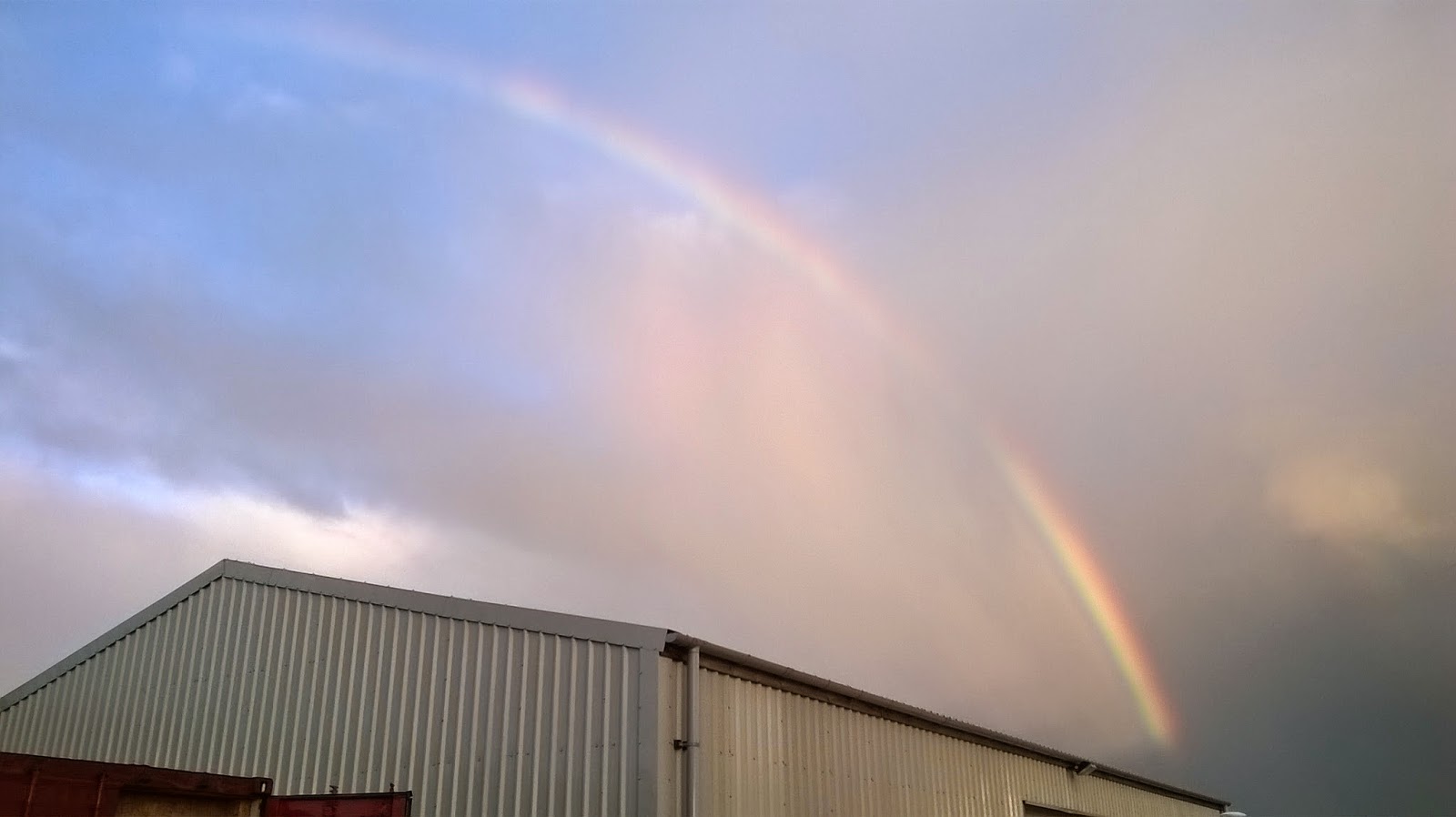 At the same location, a few hours later, following a sudden burst of wind and lash. 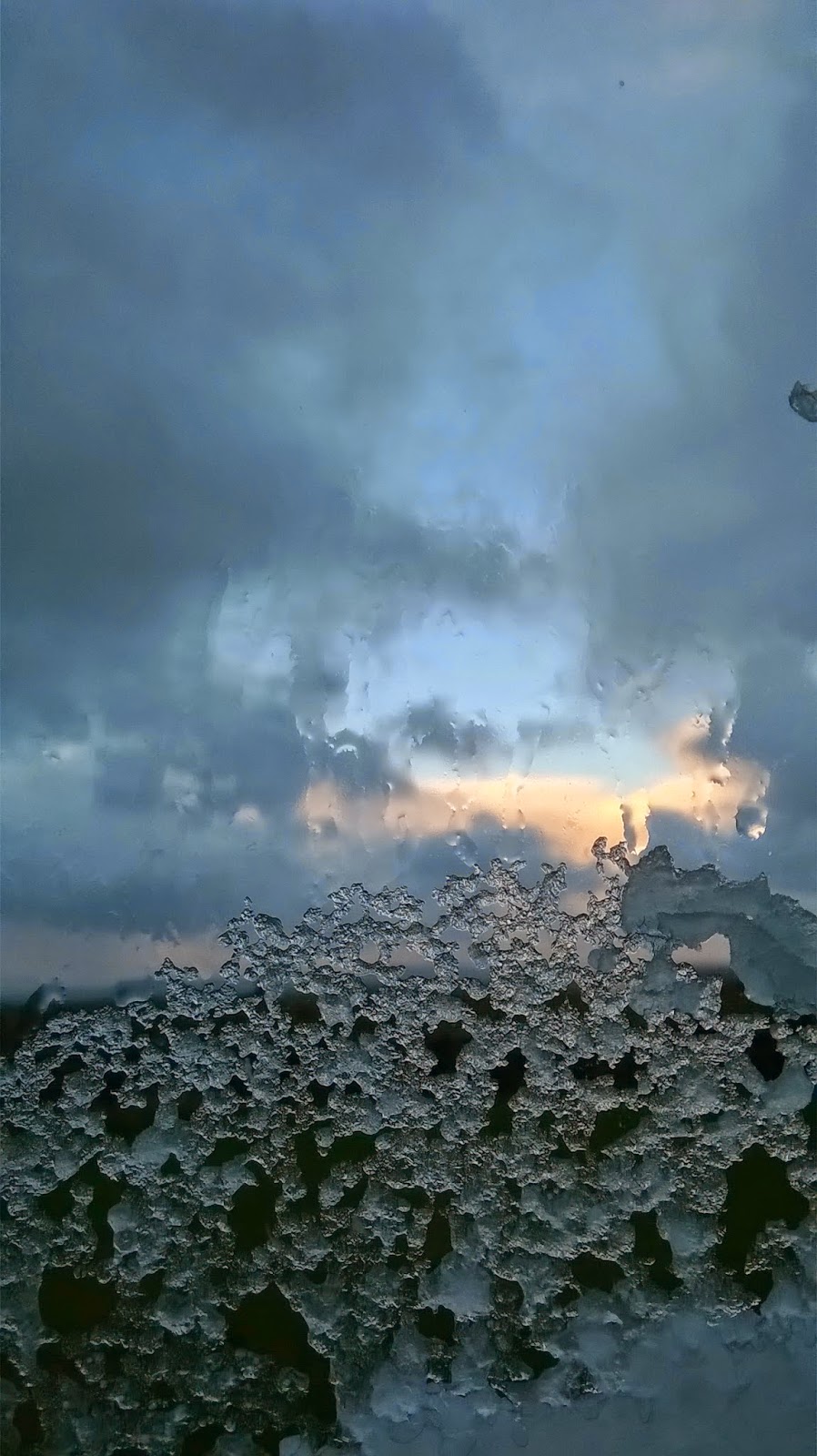 This morning, we were awoken by a thunderstorm and hail showers. 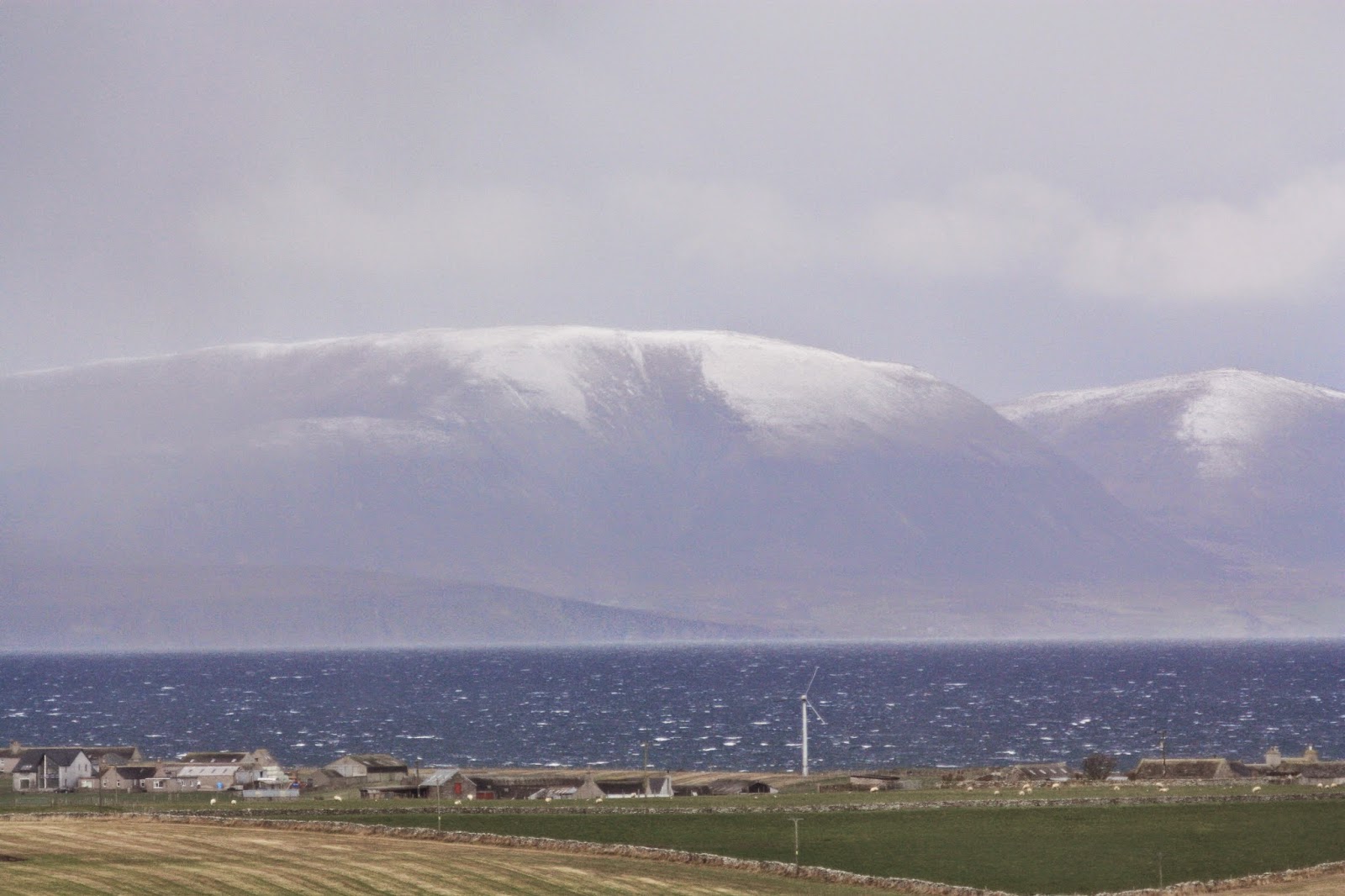 Posted by Imperfect and Tense at 10:15 2 comments:

Tomorrow sees the anniversary of my arrival on Orkney, with today's wintry weather (hail showers driven on by a biting north wind) providing a chill reminder of that snowy night last December.

So please forgive me, long-suffering reader, for a spot of reflection.

Of the many changes that have occurred during the past year, one of the most striking is the list of visitors to our garden and its environs. Not human visitors, I might add, but feathered ones. Yes, upon moving into OTT, I succumbed to the temptation to begin a garden list, a list of birds seen in and from the garden. It's a fairly artificial construct, I admit, placing a human-centric view of boundary and space upon creatures that have their own idea of what makes a territory, thank you very much. Cue angry tweets?

And, to be honest, it's probably even more pointless than that, because although we lived in the original Tense Towers for twelve years, and saw an awful lot of species in that time, I didn't keep a garden list back then. So I can't 'go compare'.

But here's the deal. It's a very unscientific contest between, on one hand, a small suburban garden, on the edge of a large town, as far inland in the UK as you can be, for the period November 2012 to March 2013; whilst on the other, a reasonably large patch of unkemptness, on a sparsely-populated low hill, within half a mile of the sea, yet 600 miles further north, for the period February to November 2014.

The former is a list of resident UK birds that actually landed in a Milton Keynes garden to feed during the winter months. The latter is a list of any identified bird species that could be seen from an Orkney property, either in or around the garden.

It isn't fair, as one period is half the other, with the raw numbers confirming this point:

But the intrigue would be any surprising similarity or disparity between the lists.

The passerine migrants are one obvious difference between the lists, with swallow, house martin, wheatear, black redstart, willow warbler, chiffchaff, red-backed shrike and cuckoo all turning up in an Orkney summer/autumn rather than an MK winter.

The same can be said for wintering wildfowl. I would've been rendered speechless if any goose, let alone a Pink-footed goose, had visited our wee MK garden.

Waders, too, have a bit more habitat to explore in Orkney so, from OTT, we have had joyous views of Snipe, Curlew, Golden Plover, Lapwing and Black-tailed Godwit.

But some things are just simply 'Orkney', like the occasional flyby of a Hen Harrier, Great Skua or Hooded Crow, all tough species to clock in sleepy Buckinghamshire.

Then I thought "Let's even things up!"

Which birds of the 'Orkney 51' have actually set claw in the OTT garden? Amazingly, the number was 28, exactly the same as for MK. And of those 28, there were only 11 species that had frequented both gardens.

It seems to be the season for quizzes and so here's the Imperfect and Tense version.

Please leave your answers (hint: cos there's no Ansers) as a comment on the blog before December 13th. All correct entries (or closest entries, if none are correct) will be placed into the Hat of Opportunity, with one lucky winner being chosen at random.

The solution and the winner's name will be unveiled on Sunday 14th December.

And the prize? A 2015 calendar, featuring images of Orkney that have appeared on this blog in the last twelve months.

Good Luck!
Posted by Imperfect and Tense at 15:26 9 comments: