Unless you've been off the planet, visiting relatives lately, you will have not failed to notice that next weekend, 30-31 January, is the RSPB's Big Garden Birdwatch 2010.

This is your chance to risk whiplash as you try to keep track of the little blighters whizzing around your feeder, or conversely, risk terminal boredom for an hour as next door's cat is sat out of your sight line but not the birds'.

It all provides valuable information on the state of the nation's wintering avifauna, from the comfort of your own home. No trudging for miles through the mud to sit in a freezing hide that's been vandalised to within an inch of pornography. Just a comfy chair, a hot cuppa and the wonder of Nature in your front or back garden (no euphemism intended).

It's a bit like the census, only it's every year and there's not a tick box for Jedi Knight.

An hour is about right for the cycle of feeding that goes on in this neck of the woods. There'll perhaps be five or ten minutes of "Where's everything gone?", courtesy of the afore-mentioned cat, or some eejit revving the nuts off his motor bike or, if you're really lucky, a passing Sparrowhawk. What? You've never tried to rev a Sparrowhawk!?!

When normality returns, it usually starts off quite sedately, Blue Tits and Great Tits taking it in turns to visit the seed feeder, with perhaps the occasional Coal Tit, timidly putting in an appearance. Three Blueys might politely and geometrically share the peanut feeder, each 120 degrees apart, lest they offend each other.

The finches bustle in next, in a whirling cloud of inter- and intra-species warfare. Belying its gorgeous colours and intricate song, there's nothing quite so arsey as a Goldfinch on a feeder. The Greenfinches aren't much better, leaving the Chaffinches to hover around the edges or tidy up under the feeder. Finally, a few House Sparrows drift in, like kids late for school, seemingly more interested in squabbling amongst themselves.

After a while, a couple of Starlings will monopolise both seed and nuts, only being chased away by the arrival of a Great Spotted Woodpecker or a Grey Squirrel. And then the cycle will repeat, starting with the mixed tit flock again.

Meanwhile, on the ground, the Wood Pigeons will have been acting out a cameo, strutting around the lawn, pretending they know which way is up or some other clever fact. The Collared Doves don't fall for this nonsense, ignoring all the bravado and handbags, preferring to attempt the columbine world record for the most birds on a small birdtable. This currently stands at eight, four inside and four on the roof. Someone should phone Noel Edmonds.

The blackbirds are the bullies of the garden, chasing away each other, Song Thrushes and any bird smaller than themselves that strays too near their food. But who's the first to alarm call and run screaming for cover at the slightest perceived danger? Losers.

Then there's the psycho schizophrenic Robins. Cute and fluffy one minute, feathered Rottweilers the next and prepared to attack anything vaguely Robin-shaped. I ask you, if you're a Dunnock, what is your motivation to get out of bed in the morning, knowing that as soon as you stick your beak out of the door, some Tasmanian Devil will "Taz" your arse for just existing? The only reason must be all that love triangle shenanigans in the rose bed, that's what. I dunno, hopping about the lawn, pretending to be all strait-laced and dour and demure, but really a bunch of sordid, sex starved maniacs. A very Victorian bird, the Dunnock.

All in all, an hour's garden watching can be pretty entertaining. So don't forget to take part in the BGBW and contribute to our understanding of the long term trends affecting our wildlife. For more details, click here.

PS If you see any Dunnocks building railways and bridges, or distributing religious pamphlets, please adjust your medication.
Posted by Imperfect and Tense at 11:11 No comments:

Taking advantage of today's relatively benign weather, our lass and I went for a trog around Tring reservoirs. She, armed with my old camera, and me with my new one.

Predictably, mine weren't the best shots, but I didn't mind too much (blatant lie) as it proves the old adage, "It's not how big it is, it's what you do with it."

As it turned out, the "do" in this case was stick it in a duck's face! 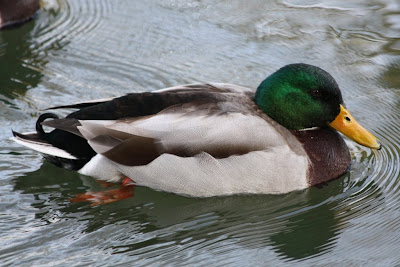 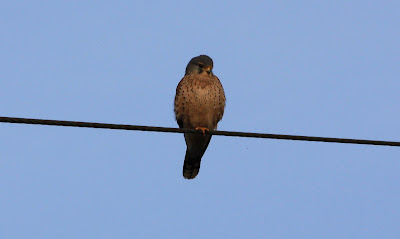 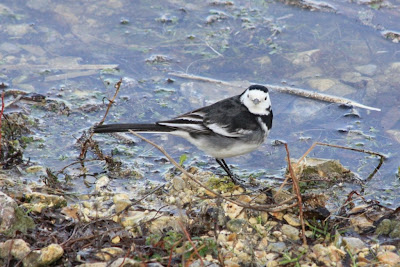 Oo you lookin' at? 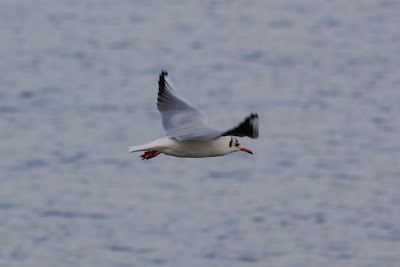 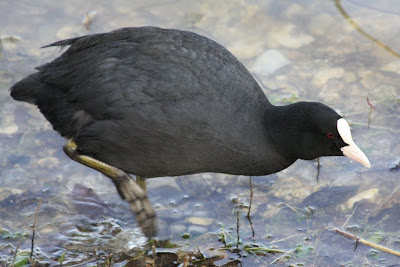 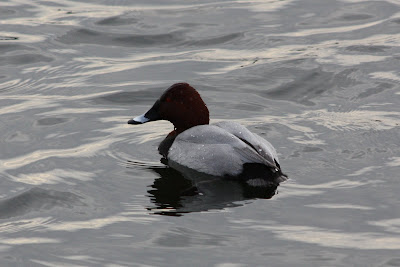 Pochard being all pochardy
Posted by Imperfect and Tense at 22:24 2 comments:

A better bit of Boro

During a weekend trip to the North East, we managed to fit in a brief visit to Saltholme, the RSPB's new reserve on Teesside.

Surrounded by acres of industrial hardware, towers, cranes, chimneys and pipework, it felt slightly incongruous to be birding in such a nature-challenging environment. The birds obviously didn't mind. The lakes and pools were providing much-needed habitat and food for plenty of waterfowl, especially after all the harsh weather of late. 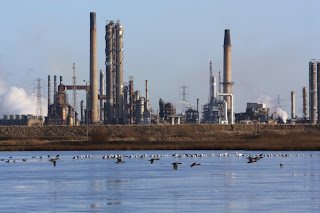 On the first frost-free and sunny day in ages, the wildlife and the visitors seemed to be just glad to be alive and out in the fresh air. The car park was pretty full and there were as many groups of birders as there were flocks of Lapwing, Golden Plover, Wigeon and Starlings.
On the way in, we had passed a concentrated mass of optics, which presumably pinpointed the rough location of a bittern. However, we contented ourselves with the spectacle of several Little Egrets in the pasture ditches and a Black-tailed Godwit feeding in the midst of a bunch of Wigeon. 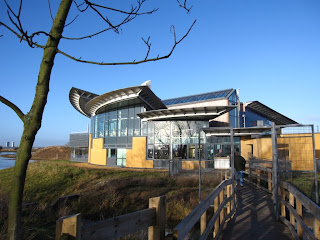 It will take some time for the place to mature into a fully-fledged reserve, but this will soften the hard edges of the surrounding landscape, whilst providing a haven for Nature and her followers. It will be noted, dear reader, that the Transporter Bridge hasn't been demolished and shipped to America to span a gorge in Arizona.
Interestingly, in the car park there are signs that proclaim "Walk this way". So is the RSPB a big fan of Aerosmith or Run DMC? We should be told.
Posted by Imperfect and Tense at 20:39 No comments:

Bill Oddie is back on the scene. Everyone's favourite curmudgeonly-yet-cuddly old scrote is returning to what he's good at. (OK, so not everybody, but I appreciate his passion for wildlife, his humour and his contributions in bringing natural history to the nation)

Scientists have figured out the routes that Arctic Terns take on their huge migration journeys
http://news.bbc.co.uk/1/hi/sci/tech/8451908.stm

It must've been L for the Romans

There was another moment of absurdness during our evening commute today. Never mind all the snow and ice gripping the nation, as we were passing a junction which becomes "Leopard Drive", my younger daughter announced,

"I'd forgotten how to spell leopard properly."

This may seem very poor form for a History graduate, but taken into consideration with her love of everything Def, it starts to make sense.

This is my 50th blog, not much of a milestone in the grand scheme of things, but I hope that these burblings have been as much fun for you to read as for me to type.

Enough of the schmalz, have a look at the photo below. It is a cropped image from a panoramic, stitched shot that was sent to me before Christmas. 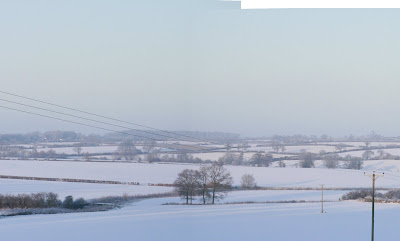 It was pointed out to me today, that the field in the middle distance is still snow-free whilst all around is covered in at least 6 inches of white stuff. And I have absolutely no idea why this should be.
Posted by Imperfect and Tense at 19:57 No comments:

Result! Today we discovered that a National Trust property would be open on New Year's Day. Tea room and all! So we set off on a Tense Tower Tour to Upton House in Warwickshire.

It was a bit nippy, mind. But very photogenic. Fortunately, after Christmas, I'd self-Santa'd myself (not a euphemism) a replacement for my old bridge camera and needed to try it out. 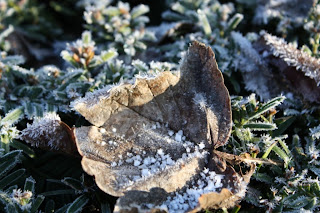 Frosty leaf outside tea-room (taken on way out obviously) 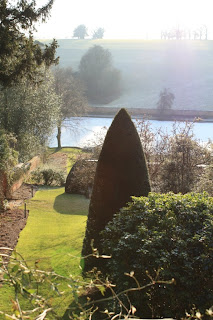 Looking down the garden to the frozen pond 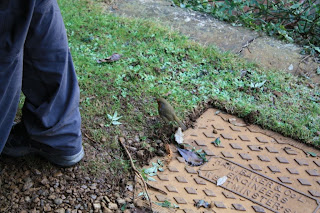 A hungry Robin eyes up the Admiral... 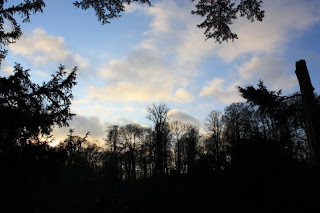 As the sun sinks towards the horizon, there's just time to nip back to the tea room
On the drive home, as our headlights panned across a field, we spotted our first Barn Owl of 2010. A satisfactory start to a year, I think.
Posted by Imperfect and Tense at 20:44 No comments: