Of mustelids and meals

Where did those two weeks go? I'd just about got the hang of trolling along, maintaining the correct work/life balance, when blogging upset the apple cart and I'm back to Square One.

Despite extracating myself from behind my desk for a few days, being sat on top of a 12 storey building in the middle of a city wasn't an utter naturefest, would you believe? A dozen or so Starlings on pre-roost and a family of Mistle Thrushes were the sum total of the wildlife distractions. Apart from the Swifts of course. Swifts? In late September? W-e-l-l, kinda. The title song from the Peatbog Faeries "Faery Stories", strangely called "Faery Stories", has Swifts as the backing track. What a glorious thing to do and it certainly cheered up my drives up and down the M6. That and the early mornings with atmospheric patches of mist and the low sun flaring off the autumn colours on the trees.

We've finally been on our anniversary weekend jaunt, combined with a "visit the family" trip to County Durham, Land of the Prince Bishops and Cricket County Champions. We booked into a country hotel in Croft on Tees, Clow Beck House, and what a sumptuous place it was. Us simple folk aren't used to complimentary slippers! The food was fab, with as many veggie options as meatatarian ones and the staff were so welcoming and helpful. We'd barely had time to recover from the evening meal, when it was time for the cooked breakfast. After we'd checked out on the Sunday morning, we ambled around their garden, taking in the sights, sounds and smells of early autumn and were surprised to spot a weasel. Amazingly, it was doing that stuff that you normally only ever see on Springwatch, leaping around like a mad thing and performing crazy back flips, without ever being too perturbed about our presence. 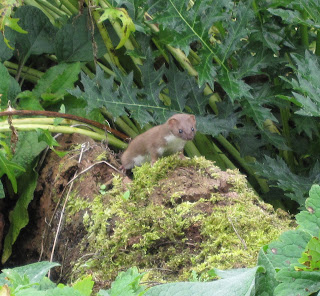 We met up with my brother and his wife for lunch in the sleepy village of Stapleton. Sleepy, that is until the pub opened and the population of Darlington decamped to the carvery, leaving their cars all around the village green. If the local football team had that amount of support, they wouldn't be in such financial straits. Sunday roast came with dish after dish of vegetables, and we all had to admit defeat and forego dessert. No, really!
Posted by Imperfect and Tense at 20:02 No comments:

Whenever friends or relatives visit Tense Towers for the first time, I issue a set of directions to ease their journey from the M1 to our front door. I appreciate that wall-to-wall roundabouts aren't everyone's cup of tea. These instructions always end with "we're up the top of the street behind the pampas grass"... at least, that is, until now.

We err on the side of native wild flowers, er... ok, weeds, with lashings of moss, a few blades of "bad hair day" lawn and the aforementioned pampas grass.

Patagonia's third greatest export (after sheep and more sheep, I believe) has dominated the easterly aspect of Tense Towers since well before our residency. It has slowly spread outwards, a bit like its current owner, but with a better-formed plan for global domination. Every few years, I would don protective gear from head to toe, take my life in my hands and attempt a grassy short, back and sides (in deference to South America, I nearly wrote " a brazilian" there). The razor sharp leaves would counter with accurate blows to any exposed skin, the feathery plumes would try to dislodge my safety goggles and a myriad of mercenary spiders would abseil down the back of my neck. You can't imagine how much I looked forward to it.

So the time has come to say "Adios, amigo!" and set our sights on pastures new. Some nice and friendly, fragrant lavender to be exact. Good for butterflies, excellent for bees, but terribly poor for getting spiders down the back of your neck. Win, win!

Yesterday, we spent a happy morning at a local garden centre, selecting said lavender and a tea rose (as MGLW seems to think I need a bit of garden danger. She's wrong). Then, fortified by a mug of tea and a large slice of cake, we loaded up our truck with several hundred kilogrammes of hard landscaping to construct the edge to our new flower bed.

This morning, whilst up to our armpits in mortar, shovels and a wheelbarrow, we were hailed in a soft Scottish accent by a passing cyclist. A lady, who I occasionally see pedalling along our street, stopped and bemoaned that it was sad to see the end of a landmark, as it had been there for such a long time. I was starting to get a bit nervous that she might produce a Pampas Grass Preservation Order and command us to make good our wanton vandalism, but our assurances that there would soon be lavender and roses seemed to calm her worries. I saw fit not to mention the fact that I'd previously tried to set fire to the object of her affections with a blow lamp, as I find that this often polarises opinion quite early in a relationship. 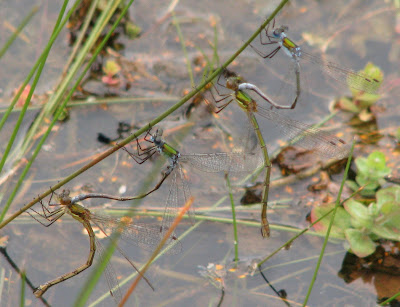 Our last Dorset survey of the year turned out better than expected, with a total of 13 species for the day. We were helped in no small way by several hours of sunshine, which meant that the dragons were flying before we'd started, a luxury that we'd not experienced for many a visit. Migrant Hawkers hunted over a small lake, Common Hawkers patrolled a wide ditch and Brown Hawkers battled each other for supremacy of the skies. One of these skirmishes saw the combatants end up in the water, still going for it hammer and tongs. We registered a single female Southern Hawker, and only Common Blue and Emerald Damsels in any numbers. Whilst there were still a few Black Darters and Keeled Skimmers about, the Common Darters were all loved up and egg laying in many of the water bodies.
My invertebrate education continued apace, when a strange fly appeared on my hand. It was the very devil to shift and scuttled sideways, like a spider or crab, when I tried to remove it. I did check how many legs it had to be sure. Six, yep it's a fly, though oddly it only had one wing, a fact that took on more significance when my colleague informed me what it was. Welcome to the weird and wacky world of the flat fly, aka louse fly, a parasite that sheds its wings when it has found a suitable host. Charmed to meet you, I'm sure.
Back in MK, and several showers later, I could almost see the funny side.
Posted by Imperfect and Tense at 22:35 No comments:

None of us could face driving to the coast on a Bank Holiday weekend, so we made our second visit of the year to Woodwalton Fen. With a fair smattering of cloud and a gusty wind, our best odo opportunities were going to found in the occasional calm, sunny spots. There were Hawkers on the wing and a few damsels to be seen, but the stars of the show were the Darters. Both Common and Ruddy were showing off their sartorial skills by roosting on all manner of articles. Hats, shirts, trousers, rucksacks, they didn't care. 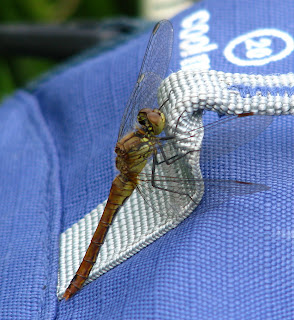 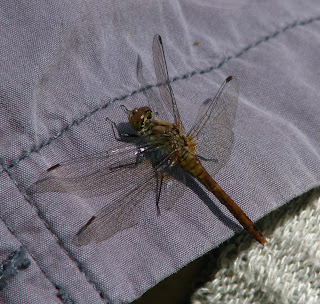 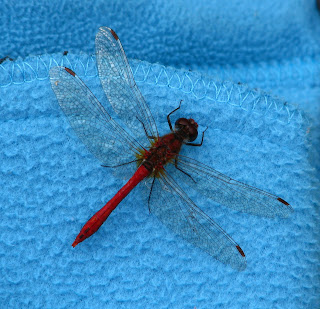 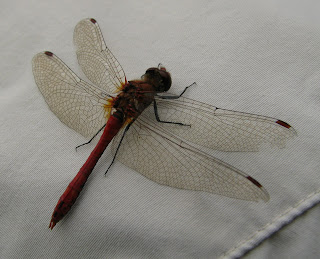 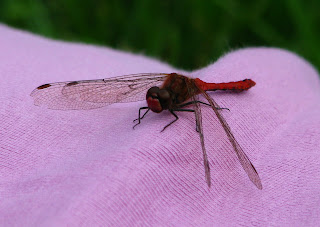 I should point out that the pink top doesn't belong to me... as mine's in the wash.
At one point, MGLW was at the centre of a territorial dispute between two male Ruddy Darters, which was a nice way to spend our anniversary weekend, I thought.
Posted by Imperfect and Tense at 20:27 No comments: