The Odes of June

Another trip to Dorset today, for June's odonata survey. Weather warm and sunny, water bodies swarming with dragons and damsels.
The lake that was bereft in May was shimmering with Common Blue Damsels, the ditches were teaming with Four-spotted Chasers and there was a good smattering of Emperors, Black-tailed Skimmers and Downy Emeralds. Though there were still only a few Blue-tailed Damsels, there was loads of Azure, Large Red, Small Red (tick!), Red-eyed and Emerald. Without a reasonable flow of water on site, riverine species aren't to be expected, but that didn't stop Beautiful and Banded Demoiselles from flying through, nor a Scarce Chaser putting in an appearance. Keeled Skimmers were emerging from the boggier areas, too. 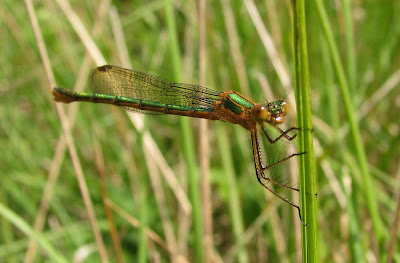 Female Emerald Damselfly
The only species I missed was, would you believe it, Broad-bodied Chaser. I am truly destined not to see one in 2009!

Despite that inconvenience, I'm a tired but happy little bunny this evening, after an excellent day's odo-ing. Fifteen species in a day is a pb for me, plus one for the life list. Sweet.
Posted by Imperfect and Tense at 21:00 2 comments:

A right royal day out

Ah, the weekend, time to unwind, enjoy the last few days of Spring and... attempt to avoid the rain.


With folk to stay at Tense Towers, it was incumbent upon us to organise a trip to somewhere. This would have to be outdoorsy, as the guests were our younger daughter and her photographer celtic boyfriend, the Prints of Wales. Looking through various weather forecasts on the net, nowhere within easy reach was going to be warm, dry and sunny. O-oh!


The choices boiled down to rain, cloud, wind and a bit of brightness at Wicken Fen or cloud, cloud, wind and cloud at Thursley. MGLW opted for the former, which was an inspired choice as the weather turned out to be warm and sunny, if a bit breezy. Phew.


With the addition of the Admiral, we bundled into the car, trundled across to Cambridgeshire and descended on the National Trust tea room. It's pandering to a stereotype, I know. Following a light lunch, we adjourned to the pond dipping area to search for Variable Damselfly and then set off through the fen, headed for the pub on the Cam at Upware. After a brief view of a male Scarce Chaser, we noticed a huddle of birders and associated optics, which is how we were inadvertently involved in a mini-twitch (may Bill Oddie forgive me). The object of the excitement was a Squacco Heron, out in the open but a long way off. In fact, a long way off from the Mediterranean, which is where it should be, rather than Baker's Fen.


That entertainment over, we continued on, listening to Cuckoos, Snipe and Cetti's Warblers, and watching Marsh Harriers, Hairy Dragons and Red-eyed Damsels (note to self: the comedic potential of that name needs further exploration). Following a sustaining pint of Black Dog, I floated back to Wicken Fen in the company of my fellow travellers, enjoying the last of the late afternoon sunshine. The Admiral found a roosting group of Azure and Variable Damsels, which was useful to compare the slight differences between the species as well as between individual examples of the eponymously-named Variables. Pairs of Muntjac Deer, Hare and Red-legged Partridge appeared in quick succession as we returned to the car and then we decamped to the nearby Red Lion for a feast fit for a king. 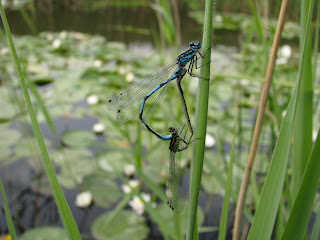 However, we couldn't resist returning to the fen for the evening's entertainment. The tower hide provided the perfect grandstand to watch Barn Owls and Marsh Harriers hunting over the reedbeds and scrub. Grasshopper Warblers began a sensory assaults on my ears, their reeling call bouncing to and fro across the lode and around my head. Then as the light began to fade, the much-anticipated finale was introduced with a feeble "tseep", as a male Woodcock patrolled his territory. Even the Prints of Wales was unable to photograph that!


Satisfied with an enjoyable day in good company, we headed back along the boardwalks, only to have one last surprise. MGLW let out a cry and pointed to the ground. We gathered around and peered at a small spot of green light in the grass, a female Glow-worm. She was a first for most of us and I guess Mr Glow-worm must think the sun shines out of her arse.
Posted by Imperfect and Tense at 11:08 No comments: