Laying a ghost to rest

The last day of Second Born's holiday with us was spent over in South Walls. We caught the mid-morning ferry across Scapa Flow, then drove from Lyness in Hoy down across the ayre which links the two islands. We were headed for the Scottish Wildlife Trust reserve of the Hill of White Hamars and, as we parked at Snelsetter, the haar had yet to burn off.

Walking down through damp meadows to the coast was an ethereal experience. All was still, all was quiet. But it was remarkably warm, so much so that a myriad of insects were on the wing, which only added to the sense of weirdness.

Once at the clifftops, the Pentland Firth was unrecognisable, and not just because it was difficult to see. The sea was calm, merely gently lapping the shore. The occasional low groaning moan of a fog horn from a passing ship the only indication of a large body of water separating the islands from the Scottish mainland. 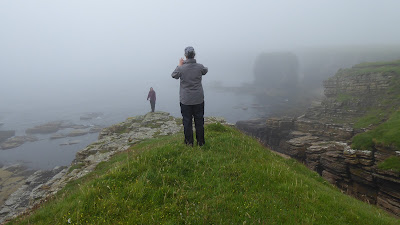 We wandered along the clifftop path, enjoying the profusion of colour from all the wild flowers. The wash of purple from Devil's Bit Scabious was gorgeous and the insects thought so too. 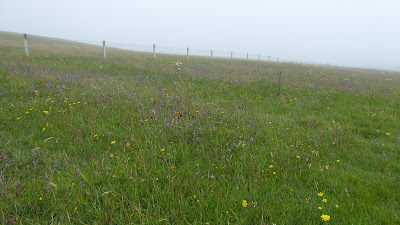 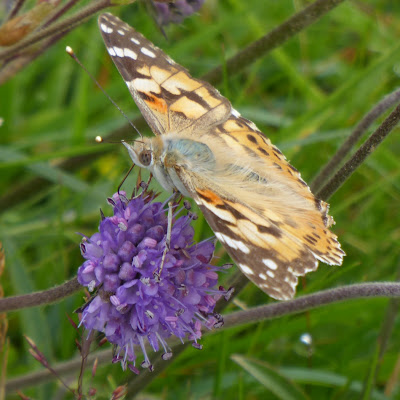 There were countless blooms of Grass of Parnassus, occasional patches of Field Gentian and a couple of places with signs of Scottish Primrose, although the only flowering specimen we found was still soaked with dew. 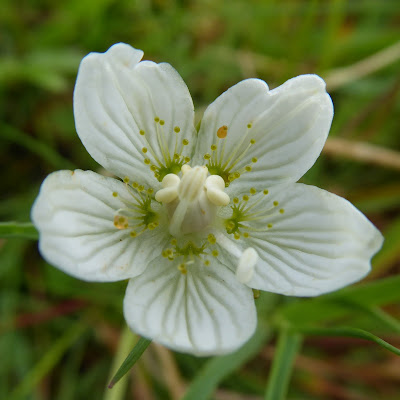 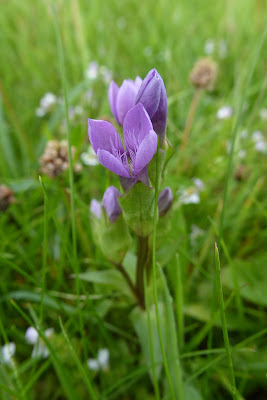 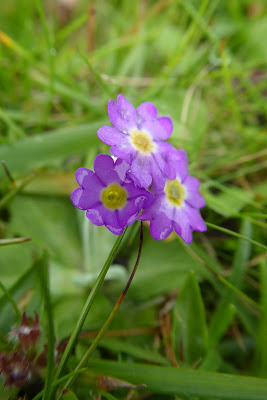 On the cliffs themselves, the Fulmar chicks looked huge, larger than their parents, as their adult feathers slowly emerged through the downy duvet of the teenager's bedroom. 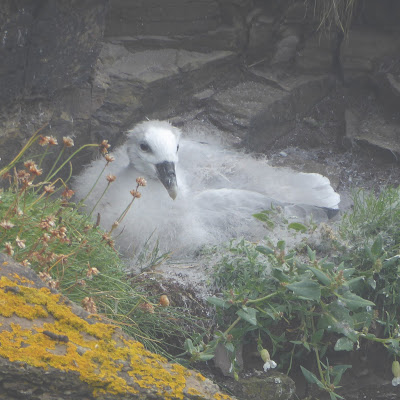 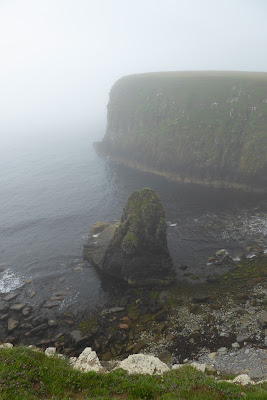 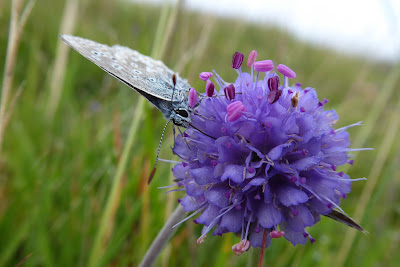 Returning to the car for a picnic lunch, we began to see an improvement in visibility, as the superstructure of ships could be detected out in the Firth, then the odd bit of Scottish geography, before finally the sun burst through, bringing blue skies. 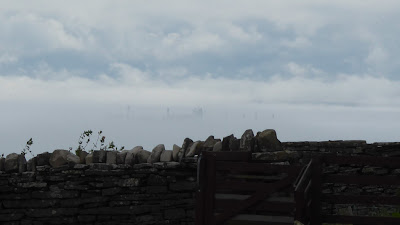 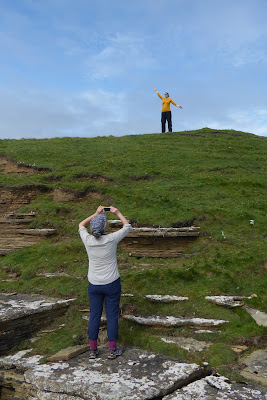 For the afternoon, we walked around Cantick Head, with occasional forays down onto the rocky shore to see what we could find in the pools. 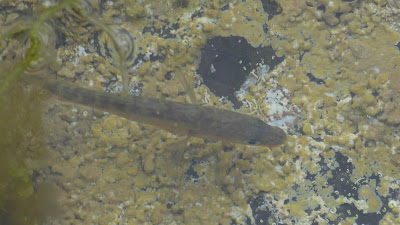 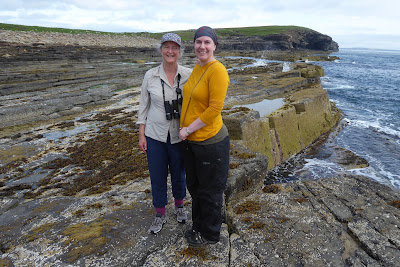 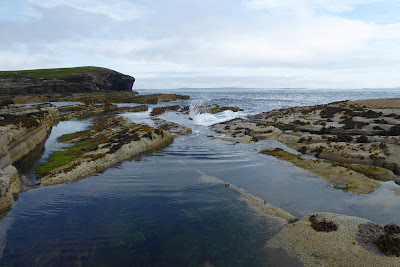 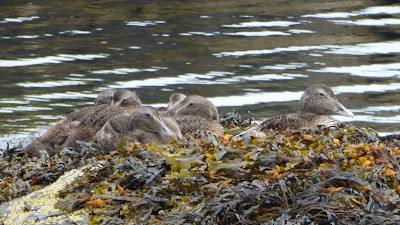 We returned to the car along a tarmac track by the sheltered bay of Kirk Hope, encountering wildlife in the form of this Wheatear, and wild life in the shape of a herd of cattle, whose bull decided to lumber directly into our path and attempt congress with one of the cows. 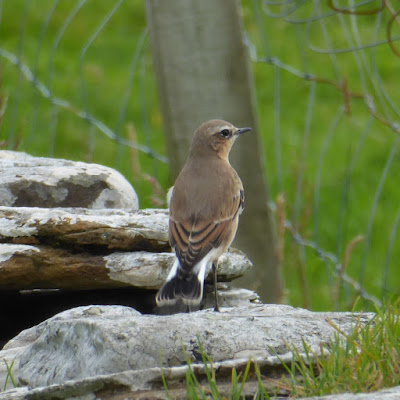 Well, after that, we definitely needed tea and cake, so drove back to Hoy to visit Emily's Ice Cream Parlour. Then, we had just enough time for a trip up Wee Fea to have a quick scout about for dragons and damsels. 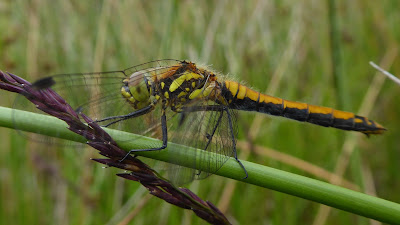 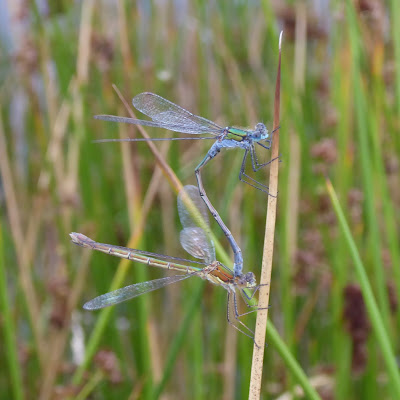 At these pools, Black Darters had finally begun their flight season, a Common Hawker was zooming back and forth, whilst both Emerald and Common Blue Damselflies were busy with the task of ensuring the next generation.

We were delighted that Second Born had been able to experience some sunshine and wide open vistas, but predictably the day of her departure was a return to cloud and wind. Even more predictably, the following day (as has happened for every visitor this year) was absolutely peachy. It's uncanny.

Finally, I must mention that this was my first return to South Walls (for leisure purposes, rather than for work) since the fateful Summer holiday of 2008, where I suffered a slipped disc in my neck (mundanely drying my hair after a shower). Following months of pain and with my mobility suffering, I underwent an operation in the Spring of 2009, and it was at the beginning of the subsequent convalescence that Second Born suggested I try writing a blog.
Posted by Imperfect and Tense at 08:15

That was a splendid idea of Second Born's and an interesting snippet of Tense biography. Obviously the op went well as you appear to be very agile. Hair drying is something I've not done for many decades :)

No wonder you're so healthy, what with all those intact discs.