Often, the journey home at the end of a holiday is a mad dash north through Scotland, keeping a wary eye on the time, trying to avoid any hold ups en route, and with the intention of catching the ferry. This year's Summer denouement was a little different, as we were barely two hours from Gill's Bay, with almost a full day to spend wending our way to a rendezvous with the mv Pentalina.

So, we hatched a plan to visit an area which we occasionally see from our lounge window, when visibility permits, and to view it from a different angle. The idea was to drive across to Lairg, up Strath Tirry to Crask Inn, to finally meet Ben Klibreck face to face, rather than from 72 miles away. Then we would continue through Strath Vagastie to Altnaharra, head to Syre along the shore of Loch Naver, before turning south east towards Badanloch and picking up the road for Forsinard at Kinbrace. Here we would turn north once more, travelling the length of Strath Halladale, to join the main north coast road and finally head east through Thurso to Gill's Bay.

This was to be a day of single track roads, taking turns at the wheel, trying to keep out of the way of logging trucks and camper vans as best we could, and enjoying the view.

Here's the route according to Google (if only I'd thought to do this at the time!). 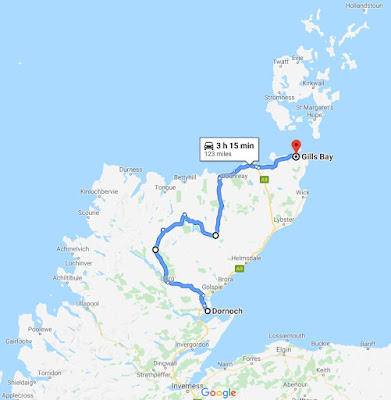 Or, to put it another way. 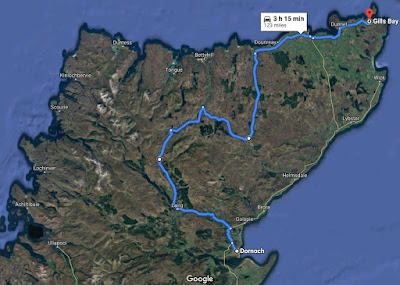 En route to Crask Inn, we spotted several dragonflies on the wing, but every time we stopped to investigate further, they could not be relocated, so their identities were to remain a mystery. Upon arriving at the Inn, we discovered that one half of the building was indeed an inn, but the other half was a church. A rather interesting juxtaposition of how to cope with life, I thought. Whilst taking the photo below, as we recce'd a nearby pool for odes (a single Large Red Damselfly, thanks for asking), I also pondered that it was exceedingly likely that Mark had cycled this way, his reason being his rhyme. 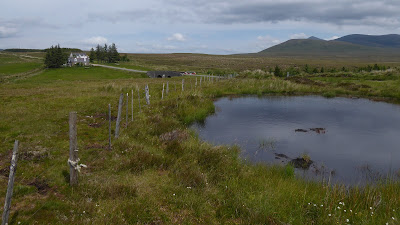 After a tasty lunch in the Inn, during which we met at least four vicars (so this must also be some sort of retreat?), we then gazed at Ben Klibreck, wondering if we would/could/should return one day to climb its slopes? 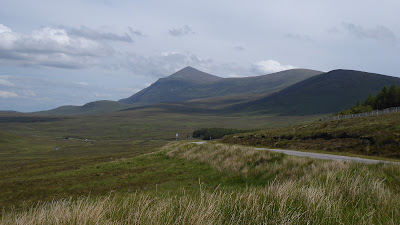 Our next rest halt was RSPB Forsinard where, sadly, the dull skies kept the dragonflies at bay, although the breeze did do the same for the midges. Wildlife interest, therefore, was mostly confined to a boardwalk which wends its way through the sphagnum moss and bog pools to a small tower hide looking across the Flow country.


The following morning, ensconced once more at Tense Towers, we took a short wander around and about, just to stretch our legs after the previous day's car-bound confinement.

A meadow of rough grazing held the promise of Hare today... 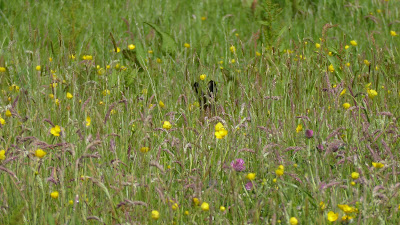 whilst the field over the road had been recently cut for silage and was full of Starlings, Oystercatchers, Curlew, Hooded Crows and Common Gulls, all busily feeding on the suddenly exposed invertebrates. 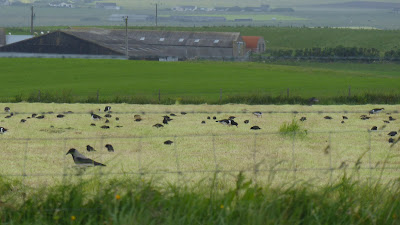 [Happy sigh]
Posted by Imperfect and Tense at 08:30

Wompum! What a wondeful end to your holiday Mr and Mrs Tense. I have cycled tbat road and those placenames strike appreciation in my heart. The Crask is a very special place, I hope it hasn't lost it's quirkiness. The previous owners, Mike and Kai, couldn't sell the place and ended up gifting it to their church. I think they live in the old hostel over the road. Thanks for the 'blog marketing' :)

No worries, Mark, Crask Inn definitely registers on the old quirkometer! I'm so sorry I made you wait so long for the 'big reveal' after mentioning it in a comment over a month ago. I doubt that I've ever had the stamina to tackle such terrain with a bicycle, and that's without stopping every few metres to look at some interesting bit of nature :o)