With the last of her course work handed in, it was time for Our Lass to have a weekend off and a proper day out, as she would call it. We decided upon Woodwalton Fen as our destination, though I was unsure of what to expect, as every other one of our visits to this National Nature Reserve has been in dragon/damsel season.

I thought the highlight of the day would be Spring flowers, or early migrant warblers, or, perhaps, butterflies. Whilst all of these put in an appearance, it was the raptors that stole the show.

Arriving on site late morning, we first walked a circuit in the southern half of the reserve, along rides and ditches bathed in warm sunshine. A Grasshopper Warbler called from some scrub, a Chinese Water Deer wandered out of a reed bed and a Stoat briefly appeared and disappeared again. There were only three species of butterfly on the wing, Peacock, Brimstone and Green-veined White, and very few flowers beyond Lady's Smock, Gound Ivy and Dandelion. I tried in vain to capture images of the butterflies, but most of my photos were of butterflowns.

Very soon, it became apparent that the day belonged to the birds of prey. Sparrowhawk, Kestrel, Buzzard, Red Kite and Marsh Harrier, all seemed to be in the air at once, sometimes with several species in the same thermal. This resulted in some good size comparison shots, though even fewer were in focus!

After lunch (The Cross Keys in Upwood, lovely treacle sponge!), we tried our luck with a northerly circuit of the fen and hit upon Marsh Harrier Central. From our vantage point in a hide, we were able to enjoy some of the "sky dancing" courtship display, including practice food passes (I think). Whilst not an expert in these matters, I would counsel that in order to impress the object of one's desires, dinner is essential. We were unable to see any prey changing talons during these exchanges. 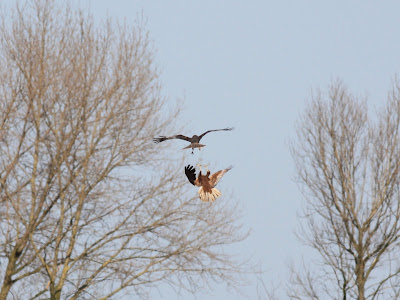 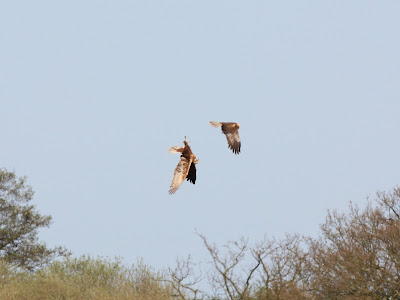 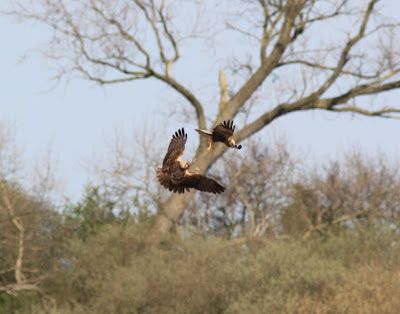 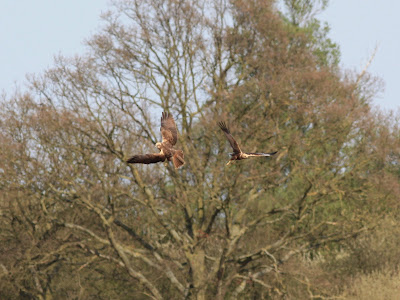 Crossing to the western edge of the site, a huge earth bank, we sat in the late afternoon sun and listened to Lapwings displaying, out over the flood meadows. A large flock of Jackdaws and Rooks headed east, and behind them, we spotted a Peregrine Falcon.
Towards dusk, raptor affairs calmed down and the tracks and rides filled with various species of non-native deer, Muntjac and Chinese Water Deer.
Following another visit to the Cross Keys (practising what I preach!), we wearily headed home, tired but happy.
Posted by Imperfect and Tense at 18:03