Our Lass and I stayed in the Everdon area for a few days as we were attending a wedding reception for a work colleague. Not only did this give us ample opportunity to overdose our senses on Bluebells in the surrounding woods, but also the time to spot a few of the many species of insect on the wing at this time of year.

In patches of sunlight within these woods, we came across several small clouds of flies, floating up and down in the warm glow of the Spring sun. Occasionally they would alight on a leaf and we could see that they had incredibly long antennae as well as a golden sheen to their wings. 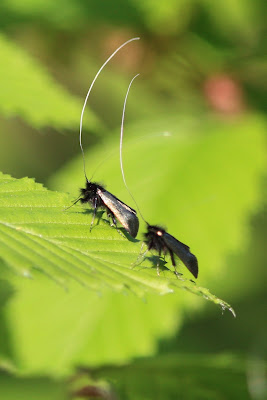 We were astonished that they were able to fly at all with such outlandish head gear. Fortuitously, several fellow bloggers had posted pictures of these creatures, so I am grateful for their ID skills in working out that are actually a day flying moth Adela reaumurella.

In a nearby wildlife meadow, we happened upon some Cornflowers, though I suspect that they were garden escapes, so possibly Centaurea montana rather than C. cyanus. Either way, I'm pretty certain that the accompanying insect is a Fourteen-spot Ladybird, Propylea 14-punctata. 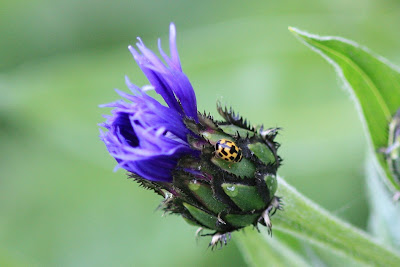 Whilst walking through a field of cattle, Our Lass, eagle-eyed as ever, spotted a Hornet, Vespa crabro, flying low over the grass. We presumed it was searching for prey, hovering occasionally before moving on again. 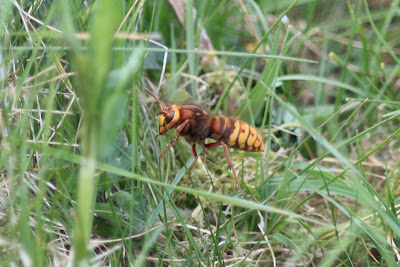 It may well have been St George's Day in England, but here was certainly no sign of any dragons.
Posted by Imperfect and Tense at 22:04