For the final day of the Easter break, we thought another short jaunt was called for. The Admiral, Our Lass and I drove the 30 miles or so to mid Buckinghamshire to visit a few places in close proximity to each other.

First up was a 17th Century duck decoy in the village of Boarstall, one of only a handful still in existence and in working order. Don't panic, it's only used for bird ringing now, not ringing ducks' necks.

To be honest, it is a bit run down and overdue some TLC. I guess that volunteer labour and sufficient funds for the task are in short supply. As it turned out, there were only two Mallard ducks in view, but other wildlife made up for our initial disappointment.

On a small feeder pond to the west of the site, we spotted a single male Large Red Damselfly. Conveniently, he kindly perched on a leaf for a photograph. 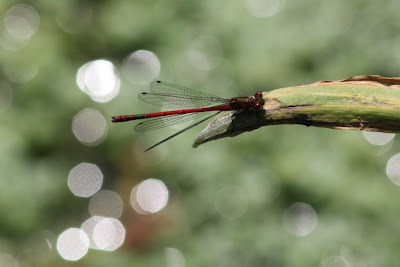 Then, as we were about to leave, a Red Kite soared over our heads. 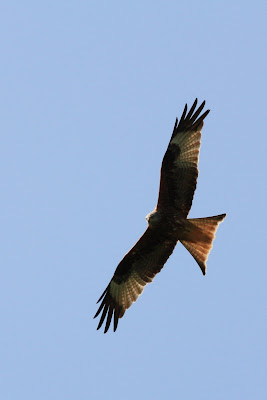 Still in the village of Boarstall, our next stop was a 14th Century Gatehouse. Here we were treated to a guided tour by a very knowledgable chap, before being let loose on the tea and cake stall. Bearing in mind that we hadn't made any plans for lunch, this was manna from Heaven, indeed.

After a potter around the grounds, in an attempt to forestall the sugar rush, we headed for Bernwood Meadows, another Wildlife Trust site consisting of ancient pasture displaying the tell-tale signs of ridge and furrow ploughing. Here we found plenty of Green-winged Orchids, including this pink colour form... 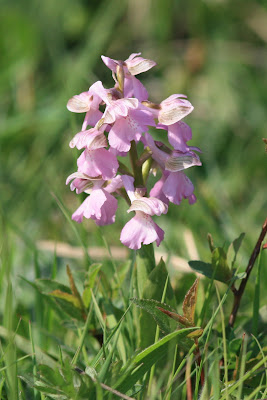 and the weird-looking Adder's Tongue Fern. 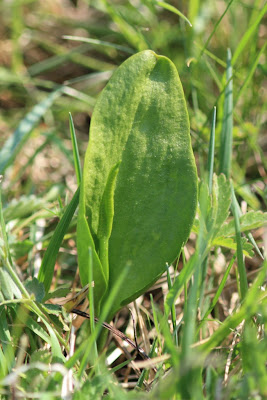 Making our way back to Milton Keynes, we spent the remainder of the afternoon at our local nature reserve, looking for Odonata. We weren't to be disappointed, as there were 6 species on the wing: Large Red, Azure, Common Blue, Blue-tailed and Red-eyed Damselflies and Hairy Dragonfly. Looking at last year's records, it took me until 9th May to see a similar number of species. The warm April weather has certainly given the season a boost.

Posted by Imperfect and Tense at 22:04