Went to Wales this weekend, with a song in our hearts. It's not unusual, but we hadn't been to The Gower for nearly a year. Drove down to Swansea on Friday afternoon and stumbled to the Mumbles for a latte at Verdi's. The pier was just about deserted in the brisk North Easterly breeze, save for a bunch of Kittiwakes, their raucous cries buffeted on the wind and crashing like waves upon our ears. Having booked into a B+B and regained some semblance of body heat, we wandered to a nearby pub, passing through a small wood, echoing to the sound of a Wren with a distinctive local accent. He certainly appreciated the green, green grass of home.

Saturday dawned cold, grey and wet. After peering out of the window, I reported back that "Baby, it's cold outside." Nevertheless, we donned our thermals and headed for Rhossili, intent on some fresh air and exercise. From the car park, we dragged our weary souls all of several yards to the Bay Bistro, for another fortifying latte, before heading across to Worm's Head.
Not having been to this neck of the woods in Spring, we were amazed at the amount of flora clinging to the cliff tops, Squill, Rock Rose, Thrift, and Milkwort to name but a few. Whilst identifying this lot, we were bombarded with bird song from Whitethroat, Stonechat and Dunnock, using the low Gorse scrub to good effect. As we traversed along the bottom of the cliffs, we were brought to a halt by a distinctive "chow" sound. There, halfway up the slope, was a pair of Choughs, happily feeding and seemingly oblivious to the excited expletives emanating from the rocky shoreline below them. After contouring around Tears Point on the high tide line, we then climbed above Falls Bay and discovered loads of Early Purple Orchid. Descending again, into Mewslade Bay, we watched, fascinated, as an intrepid band of complete and utter nutters set off on a coasteering trip, along the rocks and in the sea. 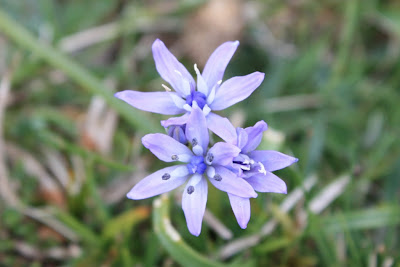 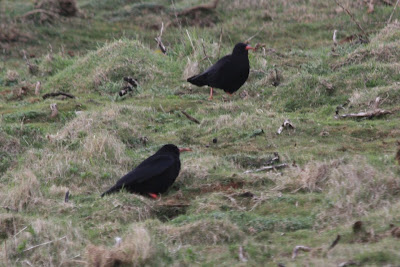 As it was getting on for half three, we headed back to Rhossili for lunch and some brief respite from the wind and rain. Suitably refreshed, we pottered along the tracks between the patchwork of fields south west of the village. The hedgerows were full of Alexanders and squadrons of Swallows were flying low level missions along the lanes, picking insects out of the air and off the vegetation. By standing up against the verge, we were able to watch them at close quarters, flying past at ankle height. After a brief flirtation with the sun, the clouds returned, so we headed back to the B+B, exhausted but happy. The evening chorus belonged to a single blackbird, perched in the garden outside our window, his soft, lilting song resonating through the now still air. It was beautiful, see.
Posted by Imperfect and Tense at 22:34

What happened to "whey aye Delilah"!

What a beautiful country, Wales. You spotted the Chough which I haven't found yet. Good to see that somebody likes it.

Yo, bro. Oddly enough, I'm having my hair cut tonight, so no temple tumbling for me.

Bob, what's not to like about a glossy black bird with bright red extremities? On reflection, I probably should've run that sentence through my head before typing it.