For the budding odonatologist, no visit to the Gower Peninsula would be complete without a visit to the Broad Pool area to search for damsels and dragons. And so it was that, on Sunday morning, we ventured out of Swansea in appreciably sunnier weather, to try our luck in this sweet spot.

A brisk north easterly breeze was still much in evidence, as was a distinct lack of water bodies. Only Broad Pool itself was holding water, suggesting that there's been precious little rain in these parts or some of the previously-visited ponds were rather ephemeral.
As you can probably guess, these two facts added together meant that we didn't even see a single damsel. Oh dear.
Plan B was the Wildfowl and Wetlands Trust reserve at Llanelli, with plenty of photo opportunities and a guaranteed tea shop, it was almost a Plan A+. I must admit to being a bit of a grouch about the "zoo" parts of some of the WWT sites, though they do bring people and wildlife into close proximity. I guess this is a good thing if it inspires the next generation of natural historians. And anyway, I still couldn't resist a pic of one of the recently-fledged Shelducklings. What a hypocrite! 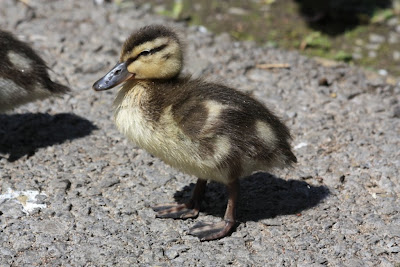 However, even in the "zoo", there's proper wild wildlife. Which bit of Nature could resist suitable habitat when it's served up on a plate? Mind you, it isn't as easy to photograph, as this tiny Goldcrest  proved. 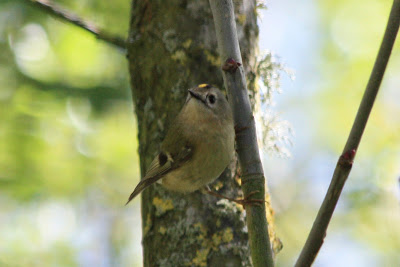 Moving on to the Millennium Wetlands, we were delighted to see a large flock of Black-tailed Godwits, with several Dunlin in attendance. We would have missed the male Garganey hunkered down on an island, if a kindly birder hadn't pointed him out. By now it was rather warm, and out of the wind there were little sun traps that had us switching on our odo radar. I spotted a damselfly fluttering overhead and we followed it to a grassy bank with nettles and other suitable cover. Our lass pointed out a group of 4 mature Large Red Damsels and as we got our eye in, we found a few immature Azure Damsels too. This was more like it. Still smarting from my previous blank year, I commented that what I really needed my eagle-eyed companion to find was a big yellow one. This a reference to my missing out on Broad-bodied Chaser for the whole of 2009. The words were barely out of my mouth, when she indicated the bramble thicket to my left and said, "What? Like that one?" 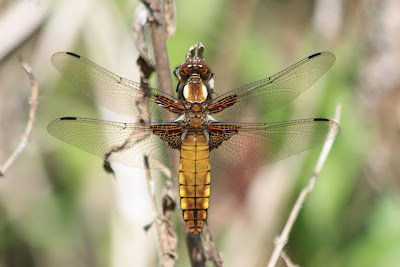 Cue much hugging and kissing, before I regained my composure and remembered to take a photograph. We also found a few Blue-tailed Damselflies and two Hairy Dragonflies on our wander around the lakes and ponds. In a month or so, it really will be a cracking site for Odonata and certainly justifies being added to our list of "When in South Wales...".
Posted by Imperfect and Tense at 19:51

Cracking shot of the Broad-bodied Chaser.
Stunning patterns on the wings.