One morning in the week, I was pottering about outside, ostensibly waiting for a delivery of two tonnes of sand, but in reality having a thoroughly interesting time in Our Lass's flower border. This garden feature, hunkered down from westerly winds behind a ramshackle dry stone wall, is a mix of self-seeded wild flowers (known in some circles as 'weeds') and more traditional herbaceous fare. 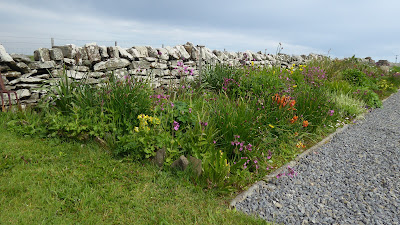 The air was still, the sun would occasionally appear from behind the clouds and there was a definite hint of what could be called warmth. A few hardy insects were abroad in the form of hoverflies, fever flies and dung flies, flitting about between blooms, but the most noticeable presence was the buzzing of bees. I took the opportunity to harvest some stalks of rhubarb as I planned to bake a cake later in the day, when the weather was likely to be less benign.

Slowly but surely, as all thoughts of sand and Covid receded from my mind, I began to look closer at the burgeoning life of the border. None of the bumblebees were of the black, white and yellow persuasion, these were all variations of ginger. This year has seen a proliferation of the Ajuga reptans (Bugle) along the edges of the border, and Carder Bees were busy on its flowers. I struggle to distinguish between the two species we have in Orkney, but I think I saw both that morning, the paler Common Carder and the much more gingery Moss Carder. On some ornamental Knapweed, I spotted the holy grail of Orkney bumbles, a rare Great Yellow Bumblebee, a once widespread species throughout the UK which is now limited to the far north.

Dandelions are still providing both nectar and pollen for the insects, but more and more of their numerous 'clocks' are going supernova to seed new life into the galaxy of our garden. 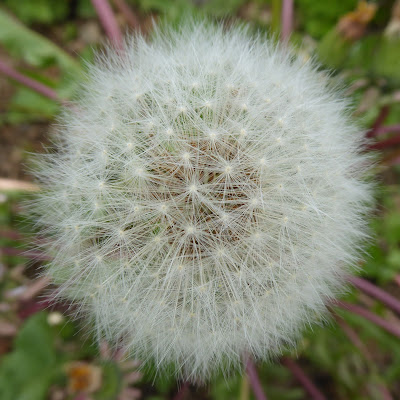 A small dash of red caught my eye, which looked both unusual and familiar. I had to take a moment to work out what I was seeing. 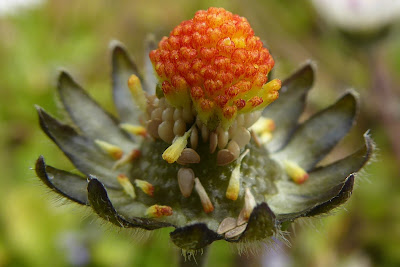 It's a Daisy flower, where the petals have been removed, possibly by House Sparrows or Linnets so that they can feed on the seeds.

After several minutes wandering up and down, marvelling at the wildlife on our doorstep, my eyes fell upon a vivid scene so vibrant that I wasn't sure why it had taken me so long to notice it. The lush green and blushing pink of a Red Campion was joined by the klaxon yellow and black of a wasp. 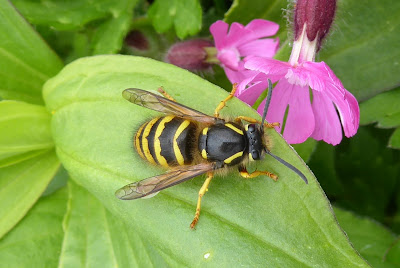 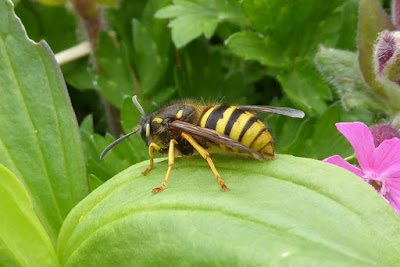 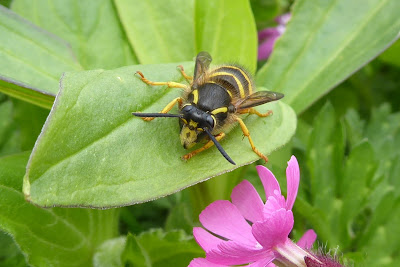 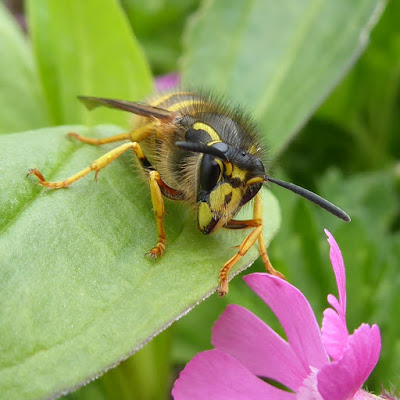 After much referring to an ID book, searching on the internet and asking local experts, the consensus is that this is a Tree Wasp. We don't see many wasps around Tense Towers, so it was wonderful to spend some appropriately socially-distanced time with this gorgeous creature.
Posted by Imperfect and Tense at 08:48