It’s said that Life is to be found ‘at the edges’… whether it is a conglomeration of organisms around a thermal vent in the deep ocean or our ancestors settling in coastal communities, foraging between the low tide line and the woods beyond the beach. More prosaically, and with a slightly-intended pun, this is also true of hedges. As a boundary between fields, or between a pasture and a path, or even bordering woodland, these are all edges in some sense.

In Orkney, it’s not a habitat which we come across very often, but when we do, it’s to be savoured. So when on holiday, we often seek out such places for the biodiverse havens that they are. And at this time of year, at least the other week in Perthshire, ‘this time of year’ means mellow fruitfulness.

On one of our walks over the Hill of Alyth, we ventured along between two such hedges, and although many of the Summer-visiting birds had departed, there was still plenty to experience.

I can’t recall ever, anywhere, seeing such a profusion of sloes adorning a Blackthorn. Whether this is due to the previous very cold Winter and the hot, dry Summer, I don’t know. Perhaps this quiet corner of Scotland is always so sloe. 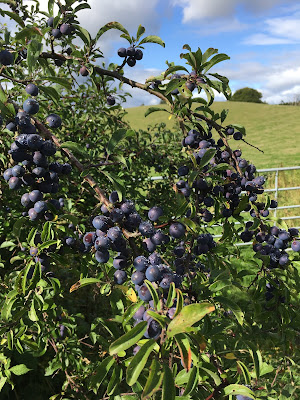 There were also masses of hips and haws on the wild roses and hawthorns, as well as plenty of blackberries on the bramble bushes. I have to admit, I had committed the error of not packing my blackberrying stick (the one with a coat hook on the end) when making holiday preparations. Truth be told, it’s not had much use in Orkney, but we lamented its absence now as we walked by bush after bush of forageable fodder. 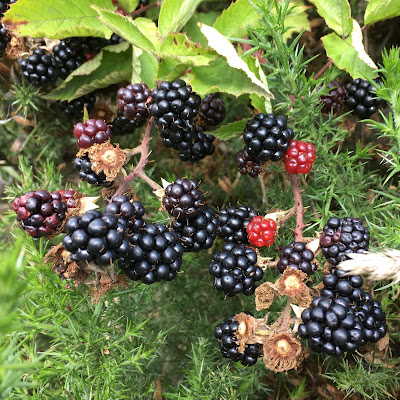 Over lunch in a café in Alyth, as we dripped dry from a sudden heavy shower, we mused upon our brambling options. Do we pass up on free food for lack of a suitable container to carry them in? Do we nip into the local Co-op and purchase a plastic container with a lid? Or do we womble a discarded, single use, plastic bottle from the grass verge and give it a second, and very environmentally-friendly, use? Oh, I should think so!

Fortuitously, we had brought some apples from Orkney, rather than leave them to moulder at home, or chuck them away. We had already bought porridge oats for our breakfasts and a tub of margarine for toast, so there was the beginning of a crumble. By carefully searching out every sachet of sugar in the cottage, I was able to complete the deal, and soon was gazing impatiently and hungrily through the oven door. 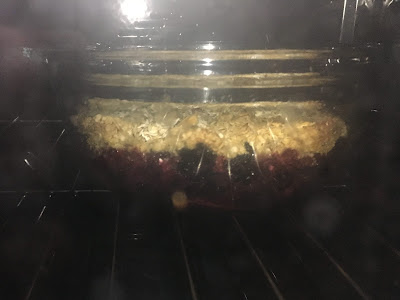 Yew berries are poisonous to humans, but one tree in the grounds of the estate was being jealously guarded by a family of Mistle Thrushes, whose rattling calls could be heard whenever they thought anyone else had the temerity to even think of pinching a berry. This Red Admiral was quite well camouflaged though, escaping the birds’ attention, as it sipped from some fruity sweetness. I presumed the upside down tactic was to improve the angle for suction rather than because the insect was paralytic on fermented berry juice? 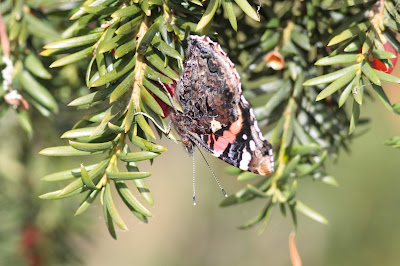 Whilst in the well-maintained gardens of Glamis Castle, I noticed an odd thing. It was a cool, cloudy morning, and the bumblebees and hoverflies were not very active. Many were heads down in the plentiful Sedum blooms, waiting for a blast of sunshine to kick start their flights, but passing the time by mainlining nectar. 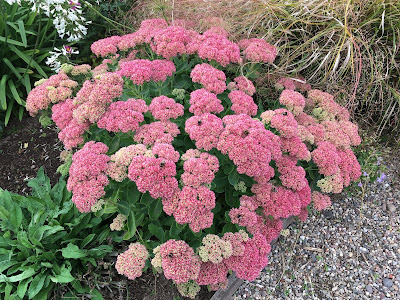 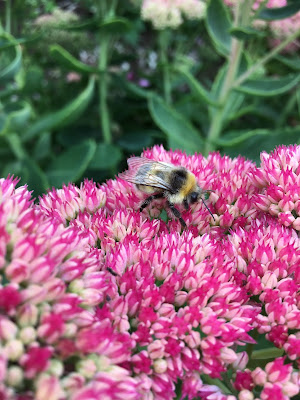 This wasn’t the odd thing. No, the mystery was that there were only two individual plants, both of the same species, which were being visited by wasps. These were Persicarias which had some unknown (to me) attraction for the wasps, as they studiously ignored all the other blooms and were only to be found clambering around the dark red spikes. 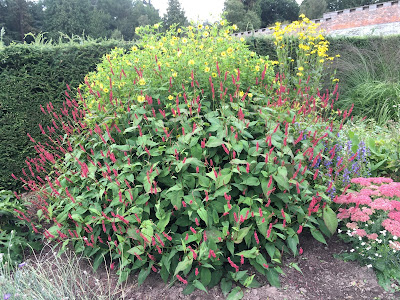 Also in the gardens at Glamis, I was heartened to find a small Fumitory plant, tucked away beneath a shrub. I always approve of a varied selection of arable weeds in a garden!

Posted by Imperfect and Tense at 20:53