Triumph on the Thames

Apologies, dear reader, this post is a bit late, due to computer trouble and an attack of "Life, the universe and everything". Sadly, not the excellent book by Douglas Adams, but more an accumulation of woes at a single point in space/time. Perhaps if they'd mentioned that in Physics lessons, I'd have spent far less of my life worrying about the meaningless froth that the eternal bar staff pour onto the pint of existence and just got on with downing the draught. Not too sure where that last sentence came from, but the weight did shift a bit, so let's move swiftly on.

Despite appearances to the contrary, the weekend just gone was a pretty good one. Saturday saw the Tense Team on the banks of the River Thames on a dragon hunt, whilst Sunday evening was spent at the NEC in Birmingham, being entertained by Canada's finest export, the band Rush. I'll spare you the song title and lyric punfest that will ensue if I post about the gig, and limit myself to a bit of odonatology.

After several years of not making the effort to go and spot Common Clubtail, followed by last year's failed attempt, the Admiral was determined to ensure that, in 2011, Our Lass and I broke our Gomphus duck.

In the UK, the Clubtail dragonflies are locally abundant in only a few rivers, where slow meanders allow for a build up of silt, a medium which the larvae prefers. In our region, that means the Thames between Lechlade and Windsor. We drove down to Goring in Oxfordshire and ate a picnic lunch by the cricket pitch as the local team prepared for a match. It was a revelation to Our Lass, watching sight screens being assembled, the boundary being marked out and fielding practice taking place.

The thing about Clubtails is that most are seen at emergence, before dispersal away from the river. And whilst they obviously return to mate when mature, they are not so easy to spot. The books reckon that peak emergence time is late May/early June and the best time of day is early afternoon. Hence our leisurely cricketing diversion, no point in bolting down those cheese and pickle sarnies, eh?

Walking along the river bank, the trick was to check the man-made structures on route, as the larvae tend to clamber up posts, bridge parapets, retaining walls and the like. Whether this is intentional on their part, or it's just easier for an odo-spotting human to see them on these structures is debatable. Either way, we soon found several exuviae (the empty larval shells) clinging to a wall under a footbridge. Sadly, this group of exuviae also contained one failed emergence where, for whatever reason, the adult dragonfly was unable to free itself.

Pottering on downstream, we encountered a recently-emerged Clubtail, perched a few feet above the water on a culvert wall. We were only able to view it properly one at a time, as the overhang meant that it was rather precarious to lean out too far unaided. Further searches along the river's edge proved unsuccessful, so we made a brief detour to look at some orchids at Hartslock, a Wildlife Trust site.

By teatime, we were wearily making our way back upstream to Goring, when the Admiral bumped into a couple of fellow enthusiasts by a railway bridge. They hadn't had much luck either, and after a brief chat, we were about to set off again when a shout brought us to a halt. Our Lass had wandered off to the edge of the bridge foundations and found an emerging Clubtail in the shade of some reeds. Whilst photographing this, the lady of the couple discovered another one, which had just crawled up out of the water. Then another appeared out of the slow-moving Thames. It was larval rush hour! I'm guessing that no-one told the dragonflies about daylight saving and British Summer Time. 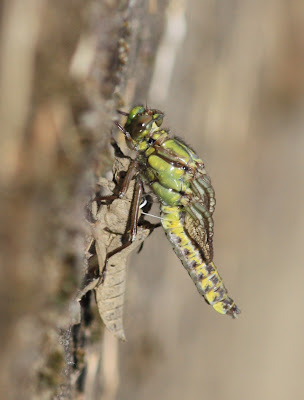 Here is a newly-emerged Clubtail, perched on its exuvia. Its wings are still much compressed and it will use body fluids to pump these up. Once this is complete, the fluid is re-used to extend the abdomen. 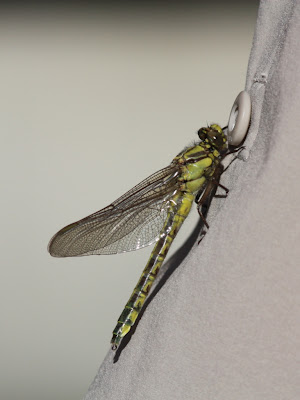 Once the wings and abdomen are enlarged, the wings are allowed to harden before the maiden flight. Due to a strong breeze, this Clubtail's first aerial foray ended rather clumsily on Our Lass's arm. On closer inspection, the photo revealed a drop of unwanted fluid oozing from the dragonfly's bum. Charming!
Posted by Imperfect and Tense at 23:14

Babies will do that!

Ha ha, yes, I recall that they do!