Spots before our eyes

Another sunny but breezy day, another RSPB reserve. Today, it's the turn of Otmoor in Oxfordshire. Set in the flood plain of the River Ray, this expanse of water meadow and reed bed feels more like East Anglia than central England. Our afternoon visit concentrated on finding sheltered spots where dragons and damsels were basking in the sunshine, out of the the cool wind.

It wasn't all Odonata, mind you. Out in the meadows, Lapwings wheeled and dived, chasing away any perceived threat to their eggs or chicks. Whether it was a fellow wader or a Red Kite, all received the same treatment and were forcefully encouraged to move on.

In the hedgerows and areas of scrub, warblers of several species announced their presence. Walking along an embankment, we were drawn to one particular bush that contained a Sedge Warbler. We sat on a nearby bench and listened to him run through his repertoire. He would occasionally stop singing as people walked past, but start up again almost immediately. 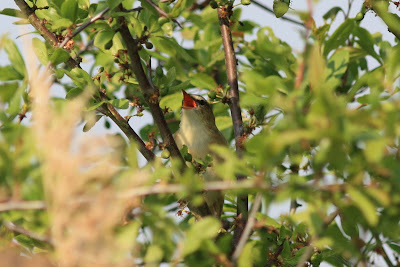 Of the dragons, Four-spotted Chasers were the most numerous and several were perched up  on reeds by the path, affording splendid views. 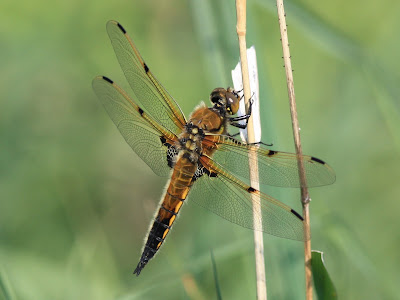 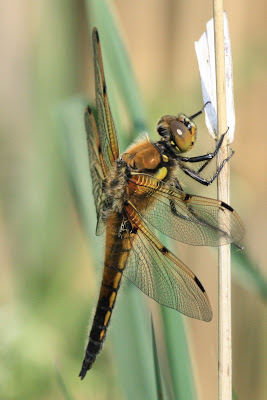 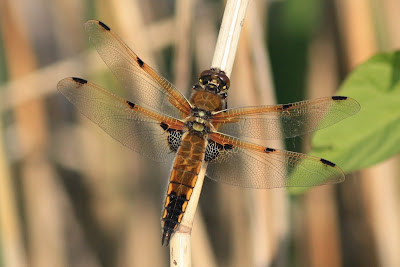 I have never been able to figure out why "Four-spotted" with any certainty. Dragonfly maths is a bit of a mystery to me. Four wings with two spots each equals... er... Libellula quadrimaculata, that's what.
Posted by Imperfect and Tense at 02:38

It's great seeing the damsels and dragons start to appear now. A bit of revising for me to do.

I tried to get to Otmoor last year, when I was off work, and got hopelessly lost. Finished up at a place called Linch Hill Leisure Park. A strange place.