Sunday morning dawns bright and breezy, with a fresh southerly wind which has a bit of warmth in it. More importantly, visibility is reasonable and for once the top of Ronas Hill is clear.

At 450m above sea level, this is Shetland's highest point, a huge lump of granite that is the remains of a magma chamber from the Eshaness volcano. Whilst this isn't a particularly tall hill, its location at 60 degrees North means that it is home to an alpine flora normally found on much higher peaks.

Not having built up our stamina as we'd have liked, we opt to drive up to Collafirth Hill on a tarmac track to some communications towers. This halves our climb, but the route is still a 2 hour slog through a boulder field to the top of Ronas Hill.

The wind isn't as balmy up here, making us wonder if we're barmy to be up here, but as we gain height, hazy views open up to the north, east and south. As we crest the hills of Roga Field and Mid Field, Ronas Hill looms ever larger and we are forced to lose height to cross Shurgie Scord. On the final part of the ascent, we disturb a Great Skua (Bonxie) feeding on a carcass. Intrigued, we clamber over to discover the remains of largish gosling that the skua must have carried all the way up here.

Once on the flat summit of Ronas Hill, we investigate a well-preserved chambered cairn, before settling down to lunch in the lee of a small walled enclosure protecting a trig point. Before setting off again, we notice a metal box tucked away behind the Ordnance Survey structure. Intrigued, we open it to discover the Ronas Hill Visitors Book, which we duly sign. 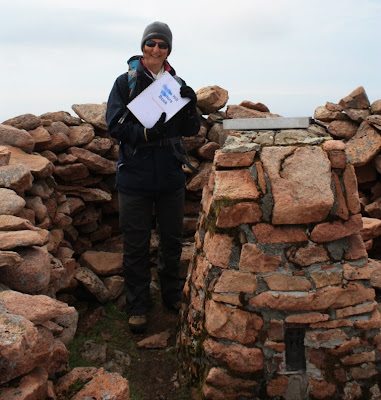 Tucked away between the boulders, rock debris and fellfield, we find numerous alpine flowers. Mountain or Trailing Azalea, Alpine Lady's Mantle, Hard Fern and Fir Clubmoss, but the relentless buffeting by the wind encourages us to leave the summit. During the descent back to Collafirth Hill, we are fortunate to catch a glimpse of a Mountain Hare as it scampers away, though even an animal built for speed has to carefully pick its route between the rocks.

In the evening, we head for Eshaness cliffs, in the hope that there's a sunset. Unfortunately, as the moment draws near, a wall of cloud fills the western horizon and renders the whole enterprise a waste of time. Well, actually, not a complete waste of time, as on the way there we had picked up our 50th bird species of the trip, a not-so-rare Tufted Duck.

The following day begins both sunny and calm, which seems too good to be true. Indeed, the Beeb weather forecast reckons there'll be rain, though local radio is more positive. Suitably encouraged, we decide to return to the Lunna peninsula in the hope of further otter sightings. Before lunch, we work our way along the west side of the headland, with only a solitary Grey Seal to report. We picnic by the Burn of Feorwick, enjoying the warmth of the sunshine and then head on towards the most northerly point of Lunna.

It begins to rain as we stop to scan a likely bay, and as on our previous visit to the area,  precipitation seems to be the catalyst for some lutrine action (apparently that isn't a word, but what the heck). From open water, a creature swims towards the shore, then dives. Another seal? A Guillemot? No, emerging onto some rocks is an otter! It proceeds to shelter under an overhanging rock and begin grooming. Having dropped to the ground, we sit on the damp grass, not daring to move, let alone put on our waterproofs. Protecting our optics as best we can from the steady drizzle, we just have to be patient and wait. Eventually, it emerges back into the open and clambers down towards the sea. 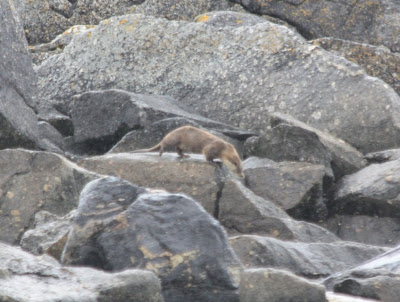 Under the watchful eyes of a pair of Oystercatchers and a pair of soggy humans, the otter swims towards us and I have to resist taking any more photos, in case the shutter noise spooks it. Eventually, predictably, I risk an image and the otter does dive out of sight and away. 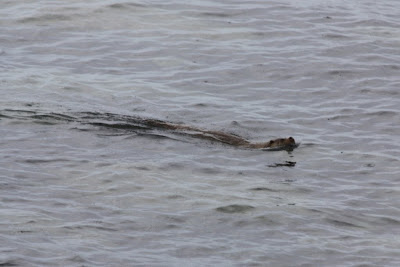 Weirdly, the rain immediately stops and we share a moment of bright eyes and big smiles in an atmosphere of "Did that really just happen?"

Our route now takes us up the spine of the peninsula to the trig point on the Ward of Outrabister. It is not easy progress, being in turn boggy, rocky and then tussocky, all the while being scolded by several Great Black-backed Gulls. Dropping down from the top of the hill, we make for the Stones of Stofast, a set of huge boulders deposited by glacial action in some previous ice age. 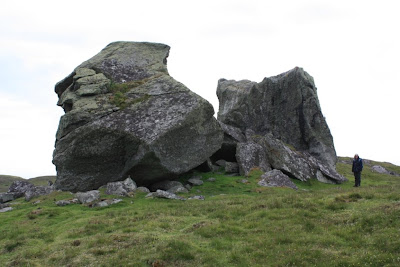 To mark another successful otter expedition, we pay a visit to Britain's most northerly chippie, for a celebratory haddock, chips and mushy peas. Boy, we know how to party!
Posted by Imperfect and Tense at 18:35