Deciding on a bit of a respite from the hiking, and cautious of succumbing to that peculiarly Shetlandic malady, Spectacular Scenery Fatigue, we visited the town of Scalloway on the west coast of Central Mainland. This was the ancient capital until those upstarts in Lerwick began trading with Dutch fisherman in the 1600s, which the court in Scalloway tried to ban, but hey, no point in raking over those ashes, eh?

We parked ourselves in a harbourside cafe and wrote postcards to family, friends and work colleagues. Well, you've got to rub it in that it's so much colder where we are, whilst they're sweltering in the heat, haven't you?

After enough tea to sink the RMS Oceanic (Shetland, 8th September 1914), we pottered around the town, looking at the castle, the harbour, the bookshop/Post Office, but not the museum as it closed for 2 hours for lunch. Not having the patience to wait another hour and 48 minutes, we pottered some more and came across this engraving on the side of a house by the harbour... 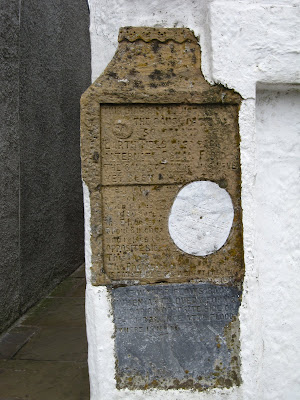 It was created in 1910 by William Johnson, a Scalloway stonemason and amateur scientist and reads:

"This diagram illustrates the cause of the so called Earth Tides. Also each alternate Ocean Flood, the cause of which has never yet been understood. Re Earth Tides: we are told that the Moon raises the solid surface of the Earth under it about 8 inches and raises the OPPOSITE SIDE 8 [inches]. This I hold to be impossible. The phenomenon called EARTH TIDES IS CAUSED BY EARTH's WEIGHT PULLING AGAINST THE SUN'S ATTRACTION.
............
"The water flows back when attraction over & forms a heap on opposite side of Earth. to balance attn. flood. There is no ..." [the rest of the inscription is illegible and appears to have been deliberately effaced.]

The white circle is a diagram of the earth and is also marked:

"GERMAN THEORIES CONTROVERTED
Germans are Not The Favoured of Heaven."
Obviously the First World War is not too far away and propaganda may be colouring this gentleman's judgement. As we have seen above, the residents of Scalloway were not averse to a bit of verbal fisticuffs, so we left town before we got into trouble for being blatantly Southern in a public place.
What had been our private joke, suddenly became a horrendous reality, as we journeyed to the island of Burra and were involved in a drive by shooting. As we pootled through the village of Hamnavoe, we spotted a small building, the exterior of which was decorated in sea shells. Somewhat out of character, our lass wasn't cheeky enough to stand outside it and take a photograph, so I got the job of firing off the camera as we trundled by in the car. As we were holding up the traffic (another first for our lass), it all got a bit fraught, as I guess drive bys do. 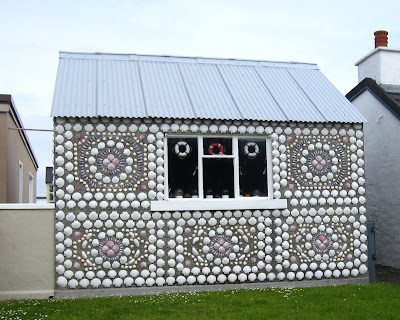 "Shell shocked in Shetland shooting!"
After all that excitement, we went to ground in the Bonhoga Gallery, a converted watermill in Weisdale. By this point, I was in disguise to protect my identity, pretending I liked salad and being interested in art.
The weather had now taken a turn for the worse, so we abandoned plans to have a walk in the area, which does boast that rare thing in Shetland, a small wood, and if that wasn't surprising enough, also an active rookery.
At a loss as to what to do next, we headed back north and then east, and found ourselves on the Lunna peninsula. Not having had the presence of mind to bring maps or tourist info for that area, we parked by Lunna Kirk and bimbled onto the shore to look at what an interpretation board described as "Shetland's best preserved bod". A bod is a stone building a bit like a small barn, and many of them have been turned into the local equivalent of youth hostels. This particular one most certainly had not, its proximity to the tide line ensuring a plentiful supply of 21st Century jetsam, courtesy of places further afield than Shetland.
Our lass turned to me to record her disgust and sadness at this state of affairs, whilst I continued to stare past her right ear, at a patch of seaweed bobbing in the waves. To be honest, countless fruitless hours have been spent watching bits of seaweed bobbing in the waves, both in Orkney and now Shetland, none of which have turned out to be anything other than actual bits of seaweed.
999 times out of a 1000.
It was slowly dawning on me that bits of seaweed don't have tails. Directing our lass to where I was looking, I brought my bins to bear on what proved to be three otters, a mother and two cubs.
OMFG! Three       ing otters!
Now at this point, dear reader, you may be forgiven for wondering if we were in the company of Wrong Len. Well worry not, cos we weren't. Nope, for the only time on the holiday, I'd left the camera in the car. By the time I had nipped back to fetch it, otters and highly-excitable wife were disappearing around a headland. I caught up with our lass as it started to rain and the otter family vanished into a tiny cove. The terrain was such that our only option for further views was to back track, up and around onto a steeply-sloping grass clifftop above the cove. Not wearing boots (we weren't hiking today, remember), a wet grass slope above the rocks was probably not a safe place to be. However, having manoeuvred into position, we risked skylining ourselves by peeking over the edge of the cliff. This gave us a very brief view of a furry family grooming session, before we were spotted and the otters dived back in the water. 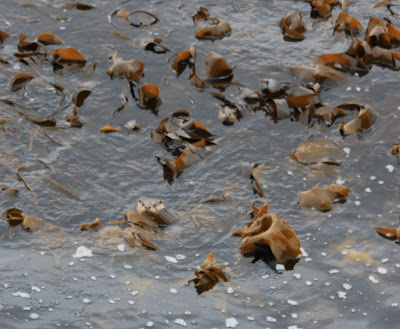 Honest, there's two otters in this photo!
Wow, our first up close and personal wild otter experience. Wet clothes, wet camera, big grin.
Even £1.36 a litre for unleaded petrol on the way back to the B+B couldn't remove the smiles.
Posted by Imperfect and Tense at 22:13