This year, for our summer holiday (or our second spring, as we like to call it), we thought we'd have a change from the usual trip to Orkney. Well, you can have too much of all that cloud, wind and rain, can't you?

Exactly.
With that in mind, we went to Shetland instead. Nestled at 60 degrees North and sharing its latitude with the likes of Oslo, Helsinki, St Petersburg and Anchorage, what better place to go to escape all that sweltering English weather?
For the first few days, we were based in the capital, Lerwick, and immediately met several of the locals, one of whom even turned up for breakfast. 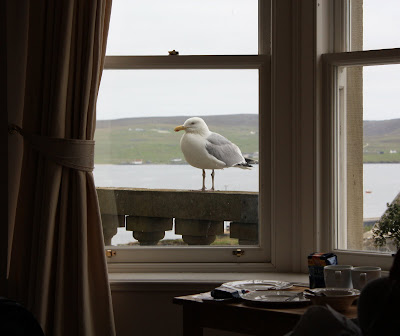 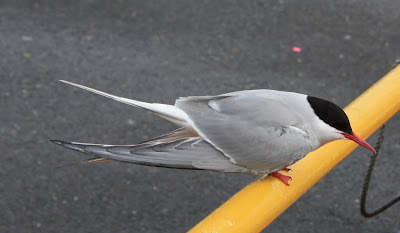 Arctic Tern
We had arrived in the middle of the Hamefarin 2010 celebrations, a festival for descendants of emigrants from centuries past, returning to Shetland to meet relatives and catch up with what's been happening on the "Auld Rock". Inevitably, for a land so steeped in Norse culture, there's a great deal of Viking regalia on display. I'd not seen so much sheepskin, leather and gleaming metalwork since the day a chapter of Hell's Angels gate-crashed an episode of One Man and His Dog.
We were travelling in the company of Wrong Len and his Scottish companion, Cameron Binns. They couldn't wait to travel down to the RSPB reserve at Sumburgh Head and take the obligatory shot of a Puffin. We took the option of parking at Jarlshof and walking along the coast to the lighthouse, a decision which paid instant dividends when a family of Wrens emerged on a dry stone wall beside us. The accent of a singing Shetland Wren is a joy to behold. Anyway, without further ado, let's get the chuffing Puffin bit out of the way, with the usual mitigation about poor light, strong winds and a rubbish photographer. 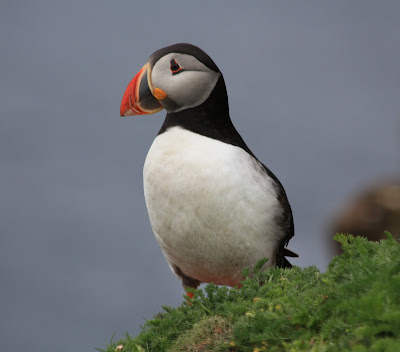 Puffin
We did pop in to Jarlshof on the way back and I was pleasantly surprised to hear a Celtus CD being played in the gift shop. Not particularly Neolithic, I'll admit, but a band sadly missed by the staff at Tense Towers.
Continuing our exploration of the southern part of Shetland, the next day we ventured to St Ninian's Isle, which is not strictly an island as it is connected to the mainland by a geographical feature called a tombolo. This is a sand bar formed by the tides flowing around the north and south of the isle, producing a beach with two shores. 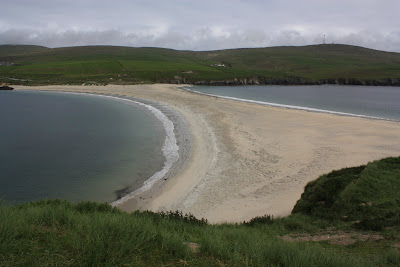 Tombolo from St Ninian's Isle
Over a picnic lunch, watching the to-ings and fro-ings of various sea birds, our lass asked a question that had obviously been troubling her for some time, "What do Fulmars actually do?" Now admittedly, they're either soaring playfully on the wind or just idly sat about, so when do they raise a family? Our bird book states that they live to be fifty, so perhaps they have got loads of time to loaf around.
At times during the holiday, it felt like all the Wheatears in the world were on Shetland, and St Ninian's Isle was no exception. We also managed to approach a pair of Bonxies (Great Skuas) who obviously weren't nesting there, as we did not come under aerial assault. If it were not for the fact that this one was sat right at the edge of a particularly narrow bit of cliff and that the wind was gustier than a gusty thing, I might even have been able to get a bit closer. 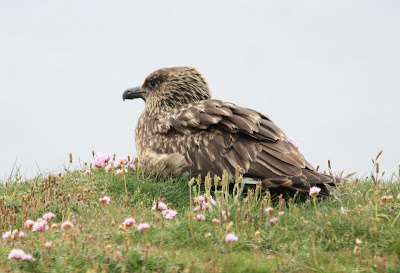 Bonxie
We now set off for our second location, where we would be based for the remainder of the holiday. Another island, Muckle Roe, this time connected to the Shetland mainland by the more prosaic method of a bridge. And also a  very different prospect to the bustle of Lerwick, a B+B tucked away at the end of the road on the south side of the island. 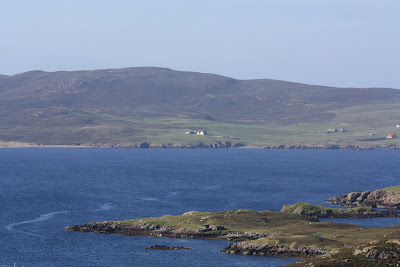 Perfick!
Posted by Imperfect and Tense at 18:10