Our last full day in Inverness was spent touring around a couple of sites to the east of Loch Ness. However, first port of call was the Iron Age hillfort atop the hill, Craig Phadraig, behind our accommodation. Standing on the remnants of the fort ramparts afforded views of the Beauly Firth and the mountains beyond. A Red Kite slowly glided overhead and numerous twitterings from the surrounding woodland suggested a healthy population of tits, finches and Goldcrests. 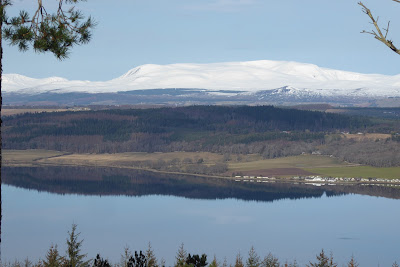 Next up was RSPB Loch Ruthven, a breeding site for the rare and spectacular looking Slavonian Grebe. Whilst we see these birds in Winter in the waters around Orkney, they are not in breeding plumage at this stage, so we were hopeful of some early returners to the loch. Sadly, it was not to be, much of the loch was frozen over, but we did see and hear some noisy Little Grebes, trilling away for all they were worth. Also present were three Goldeneyes, a big flock of Teal and a small flock of Wigeon.

As we walked disconsolately back along the shoreside path to the car park, my eyes were drawn to a patch of something on a tree trunk. It would've been hidden from my gaze on the way in,  but now stood out as worth investigating. 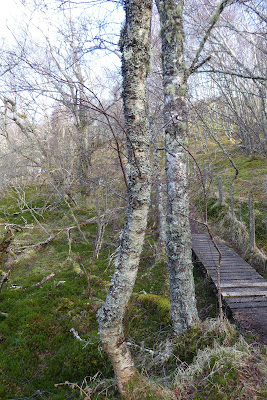 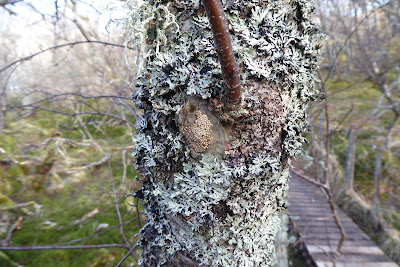 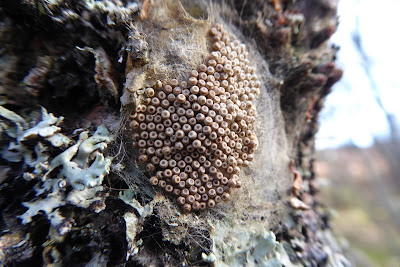 Early thoughts were that it may have been constructed by a spider, but I was reluctant to poke about in the hole at the top, because... reasons. Obviously I wouldn't want to disturb any creature therein, especially on such a cold day. Yes, that was why.

Later, I pinged a few photographs of the structure to L back in Orkney, as she is a dab hand at identifying this sort of thing. I was amazed by her answer. It was the cocoon and eggs of a Vapourer Moth. The wingless female had emerged from the cocoon last Summer, mated with a winged male and then laid her eggs in situ. Later this Spring, the eggs will hatch and little caterpillars will disperse to feed on the surrounding greenery.

Continuing the walk back to the car, we realised that the temperature must have increased ever so slightly, and the wind, too. The thin coating of ice on the loch surface was on the move, and where it met the shore, it was shattering and breaking. Whilst in no way as spectacular as scenes from Canada and the United States, where they have bigger lakes and thicker ice, it was a fascinating thing to witness. See here.

After lunch, we needed some more exercise, and headed to Littlemill, a Forestry Commission Scotland site. Although now wooded, during the last Ice Age, other things were happening here. Meltwater, flowing through tunnels within a glacier, carried along sediments. When the glacier melted, these sediments were deposited on the ground as distinct sinuous ridges, now known as eskers. Some of them are still taller than a house. They weren't easy to photograph, but below are a panorama across one, then a few shots along different ridges. 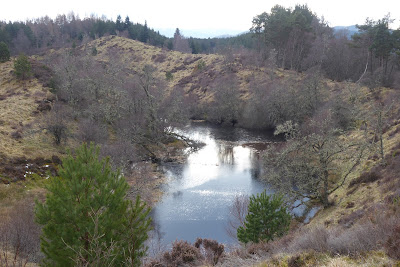 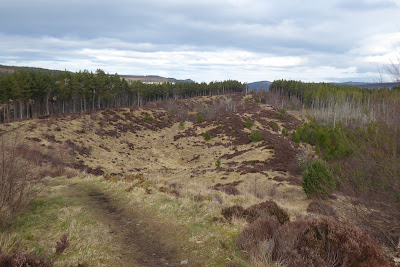 Also on this site were several kettlehole lochans, where huge lumps of ice were deposited and buried. As the ice subsequently melted, the holes left behind filled with water. This wood isn't too far from the A9, and we will certainly think of visiting it during dragonfly season!
Posted by Imperfect and Tense at 11:05

Fantastic pictures as ever - Amazed to see right across the firth to the caravans at Coulmore. The Ben certainly was white that morning.

Wouldn't have had an inkling as to what the little eggs were either so if I ever see them again I'll now know.

I can't quite believe how fortunate we were with the weather. Although if it had rained all week, I'm sure I still wouldn't have fully explored Leakey's Bookshop.