If I'm honest, it was the hare. Stick a picture of a hare on a box and it's a nigh on certainty that Old Tense would buy it. So what if it's a 1000 piece jigsaw? Who cares there's lots of white... and black... and enough shades of grey to give anyone a libido-sapping headache?

All I saw was the hare.

And so, on Christmas Eve, at right about the time the sherry and gin began to flow, we made a space at the end of the dining table and opened the box. 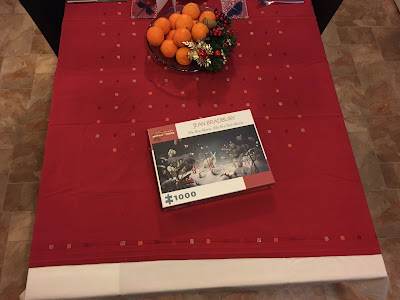 From the off, it was obvious that this was a jigsaw in a different league. OK, we found the four corner pieces pretty quickly, but only one of them could be located with any certainty. 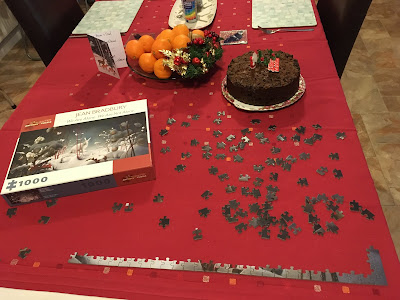 The bottom edge was the obvious 'way in'. The other three sides took much longer. 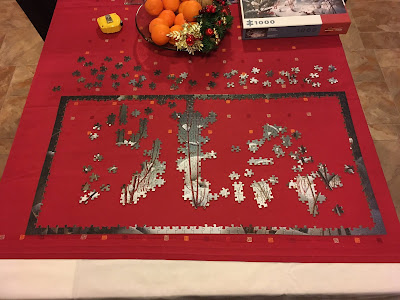 In fact, even when the perimeter was completed (after recourse to the tape measure, because two sides were the wrong length for a while), there were several mistakes in the top edge which wouldn't come to light until much later. 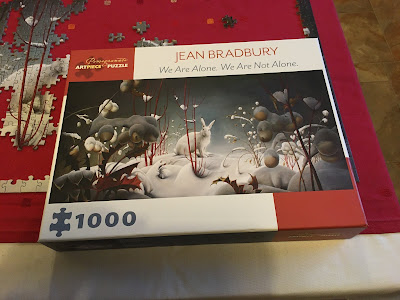 But hey, there's a lovely picture of a hare on the box. 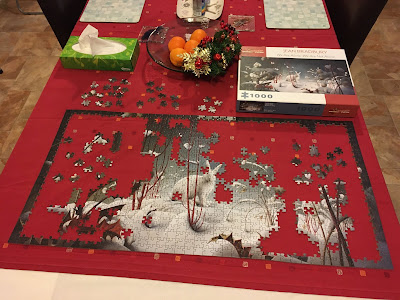 And at least that bit is done! 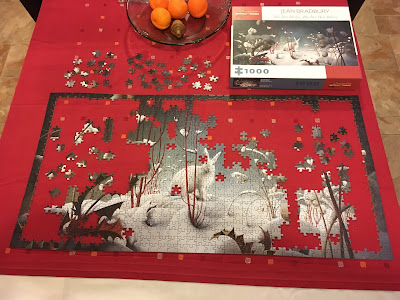 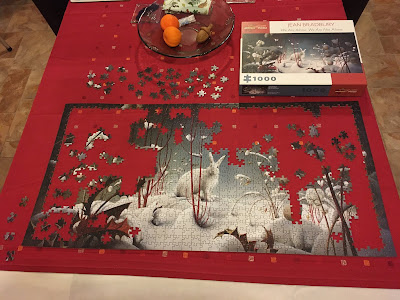 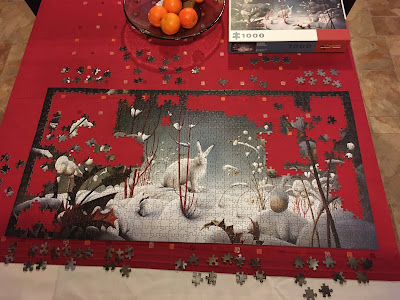 OK, painfully slowly. And with all the white areas done, it was time for the greys and blacks.

However, tonight, after 42 days, and with 999 pieces in place, I arrived at the final piece of the puzzle.

Yup, there was one more mistake to rectify. 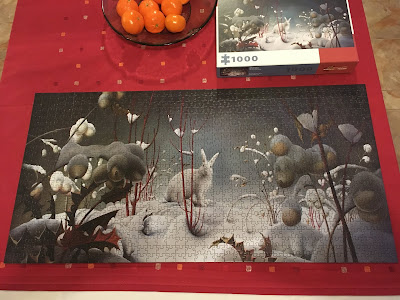 Phew! Can we change the tablecloth now, before someone calls Environmental Health?
Posted by Imperfect and Tense at 21:26

giggle giggle! I'll be honest, though, the pretty picture of the equally pretty hare would quite likely have pulled me in too LOL I do love hares!

Every Winter, I tell myself that I should make the time to go to Hoy and see the Mountain Hares in their white coats. One year...

Well that made me chuckle. I can imagine all those greys driving you mad. I guess you’ll be going for a very colourful busy design next time lol! B

I must admit that, about halfway through, I was reminiscing about the beetle jigsaw from a few years ago. Plenty of colours in that!

Loved it - had a stressful evening of Password dilemmas and local environmental firefighting. For reason after this time a successful attempt on submitting a meter reading I decided I'd not 'Tensed' for a few months.

So glad I did a very welcome unwind from my evening of stress. Thanks Mr W