On a sunny but blustery morning, I ventured over to the West Mainland to meet up with Eagle-eyed M at the RSPB's Brodgar reserve (co-located with the slightly earlier Neolithic stone circle).

A stiff south westerly breeze, with firm intentions of career advancement to gale, made conversation difficult and progress slow. As we wandered by the stones of the Ring, it was possible to hear snatches of song from a Skylark, as it sang territorially as if it was a calm day. The pools to the north of the site contained flocks of Wigeon and Shoveler. M spotted a pair of Shelduck too.

Dropping down to the shore of Stenness Loch, we turned south to walk along the bank, with the wind making waves of the brackish water, in this normally sedate water body. Tufted Duck, Goldeneye, Mallard and Red-breasted Merganser were busy either courting or were already paired up, a sign that the cycles of Nature pay little heed to local weather conditions.

We paused by a bench at one end of a small bay. Across the other side of the bay, a lady in a high vis waterproof was walking her dog. Well, ostensibly she was walking her dog, but at that particular moment she was staring intently at the water's edge from her vantage point atop a low bank.

M quickly scanned the opposite shore and soon found the focus of the lady's attention... an Otter, who seemed reasonably unconcerned by the presence of a human and a dog. 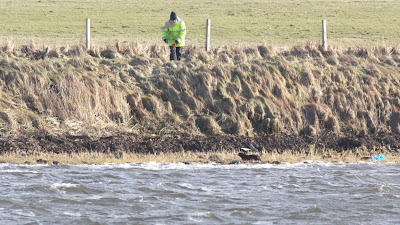 Rather than create extra disturbance and jeopardise the moment, we stayed put and watched from afar. But when the dogwalk continued, we took our opportunity to make our way around the shore to a similar position.

The Otter was nowhere to be seen, and try as I might, the waves of the loch made it impossible for me to locate the animal swimming in deeper water. It didn't help that we were facing into the wind and my eyes were actually watering.

Fortunately, though I suspect fortune played no part in it, M was able to locate the Otter, and we watched incredulously as it swam straight towards us. We crouched down (thank heavens I had put on waterproof trousers!) to mask our outlines behind the tussocks of grass at the edge of the bank. Certainly, there was no possibility of our scent reaching the Otter.

The animal came ashore on a small islet and proceeded to eat whatever it had caught. Although it was aware of our presence, it did not seem put off from its meal in any way. The buffeting of the wind made photography difficult, but I was able to take a few images that weren't obscured by flailing, out-of-focus grass. 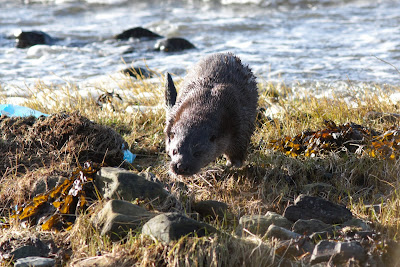 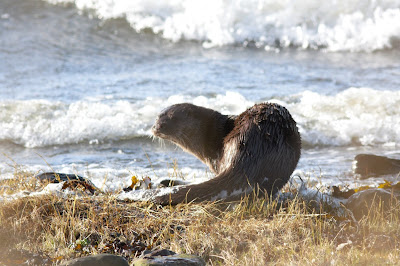 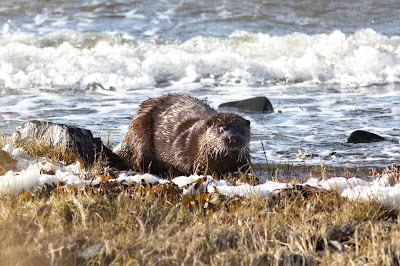 Posted by Imperfect and Tense at 17:14

You beauty! A tense moment :D

Lutrine-induced euphoria, we were speechless!