Neil Peart , who sadly passed away earlier this month, was the drummer and lyricist with the Canadian rock band Rush. The rhythms and beats of Neil's drumming were always interesting, there was always some little quirky percussive thing going on, but for me, his wordsmithing was of an even higher standard. Here was a guy who could seemingly pen verses on any topic in a thoughtful, meaningful way, whose rhymes were soothing on the ear, and which featured some clever puns.

Phrases, a couple of lines of a verse, often whole songs, would strike a chord on first hearing, or perhaps months and years down the line, when a new situation arose to confound an expectation and needed some serious thought.

Through the early to mid Eighties, when Our Lass and I were courting, or engaged, and even for a year of marriage, we spent a lot of time apart due to... well, I guess you could call it 'our careers'. Often at different ends of the country, occasionally in different countries, our relationship was forged by 10p pieces and good, old-fashioned pen and paper. As in any long-distance relationship, things weren't necessarily easy, and a song that often kept me sane was this gentle ballad:

As a rather naive chap, I took most news at face value and didn't look too deeply into the background. A dawning awareness that stuff might not be as it seems was epitomised by a song which was probably about the 17th Century but... hmmmmm:

Much later in life, when a pair of risk-averse 50 year olds were trying to decide whether to leave the comfort of suburbia, the trappings of two reasonable salaries and a slow, steady decline into our dotage, or careen off on an adventure into island life with a reduced income, increased costs and horizontal weather, another tune sprang to mind: 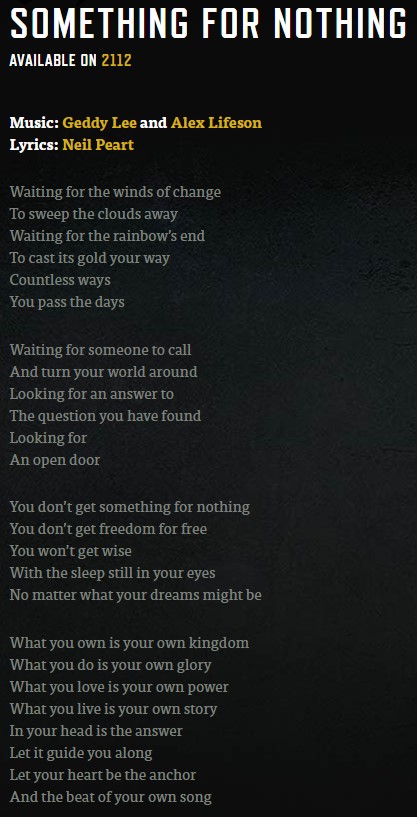 [Apologies to Mark at this point, if he was expecting that one to be 'Subdivisions'. I couldn't put every song in the list!]

Devoted aficionados of Imperfect and Tense may recall an early 'Stuff On My Phone' post featuring Rush which I suppose means it's the track of theirs which I listen to most. Other tracks would perhaps have been more obvious musically, but the words of this one elevate it to that position:

A question. Am I allowed a 'Serendipitously' yet? I don't think I've had one so far in 2020... Serendipitously, once in Orkney, some songs which I had been listening to for over 30 years began to take on added resonance:

Neil had obviously taken the time to experience wide open vistas and elemental forces. I like to think he would've appreciated Orkney.

And there's a few verses of another song which hold special meaning now:

I wouldn't wish to give the impression that the Book of Tense is solely populated with Rush song lyrics as a guiding principle, but sometimes a line will lodge in the memory until such time as it is needed. With drumsticks and pen, Neil Peart certainly forged his creativity closer to the heart.

Posted by Imperfect and Tense at 13:45

What an wonderfully written post Mr Tense. I too was saddened by Neils passing. What an amazing man - a drummer as well as lyricist is almost unheard of, especially of such quality. I read recently that when their original drummer - John Rutsey left tbe band c.1974, they were auditioning drummers. A young lanky, goofy, geeky Neil came in with two bass drums, xylophone, loads of symbols etc - Geddy and Alex were nudging each other thinking 'we've got a right one here' but then when he started playing the smile was on the other side of their faces! You've posted some excellent lyrics there too, his words are poetry and stay with you.

"dancing fires on the beach singing songs together, although it's just a memory some memories last forever" - 'Lakeside Park' from Caress of Steel.

Thanks for posting, toodles - Mark.

Good afternoon Mr Tense, I've been listening to a lot of Rush since your last post (especially in the car, away from the delicate ears of TWD) I must comment on the lyrics of 'freewill' on the Permanent Waves album.

I appreciate this track a lot more than I did 40 years ago when I bought the album new! It is full of tru-isms i.e 'blame is easier to give than recieve' 'if you choose not to decide you still have made a choice' 'genetic blends with uncertain ends'. Not only does one marvel at these nuggets of truth but I'm astonished how he gets them to rhyme! What a command of the English language. Finally a play on words 'I will choose free will' the fact that you can 'choose' shows you have free will - clever.

One tiny criticism about PW, he uses the word Integrity too many times - four times stretched over two tracks. Maybe the album should have been called 'Integrity'. Anyway those are my thoughts. Toodles, Marky.

In an unplanned moment, whilst visiting Glasgow this weekend, we journeyed to Balloch at the southern end of Loch Lomond, and wandered along the shoreline through a country park. So, technically, a lakeside park 😊