Relax?! With all this to worry about?!

Gah! Who, I ask you, who? Who would go on holiday, principally to watch wildlife, and not take any of their ID guides? Yup, our Summer holiday was pretty much a fortnight of me asking myself this question daily.

In my defence, for the first week, we were staying in a cottage which we had visited previously, so I had been quite comfortable that we wouldn't encounter anything too outlandish requiring reference to a vast library of species. Our main reason for a return visit to the Tay valley near Aberfeldy was Our Lass's new knees and the prospect of unleashing them upon some lovely Perthshire walks. That and a bookshop which is also a tea room, which is also a bookshop, which is also a t... honestly, it's a wonder we made it back out again.

Weather-wise, we didn't experience any of the extremes which other places were having, no blistering heat or huge downpours and floods, just warmish sunshine and frequent showers. Our waterproofs had a great time, thank you.

The second week was a bit of a leap into the unknown, at a property near the shores of Loch Fleet, not far from Dornoch in Sutherland. Y'see, we're serial guests, often visiting the same place year after year because we know we will be able to relax. So a new cottage is always a little disconcerting, at least initially. Also, the Dornoch area is one of those places that we whizz by on the A9, having just left home or haring back north to catch a ferry. But not this time, it was time to 'splore!

If all this wasn't unnerving enough (what with the ID conundrums and the weather and the unknown places), this was also my first holiday with another camera option. To fill the gap between the camera on my phone and my DSLR with a fixed 300mm lens, I had recently purchased a small compact camera which was able to take close-up photographs. As an experiment, this worked for some applications and not others, but as the compact also featured a x30 zoom, I ended up using this camera the most. With the consequent saving in lugging around a heavy lens, yay!

But I will begin this photo-fest with an image from the DSLR and 300mm lens (because the subject was very whizzy about and I couldn't capture it any other way... although I did try). 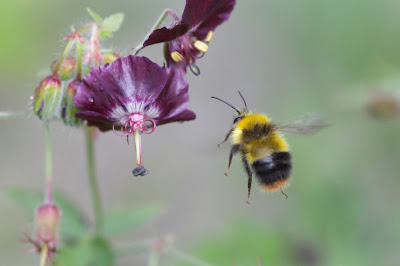 Just outside the front door of the cottage was a small flower bed with a variety of shrubs and plants. One of these was a lovely dark purple Geranium, which was an absolute bee magnet. Because there were several species of bumblebee present at the same time, this particular one stood out as it was so small. It was a species that I didn't know (and, yes, I did receive a bumblebee ID guide last Christmas), therefore a swift trip to the Bumblebee Conservation Trust website was required. So... this is a male Early Bumblebee.

As this was the first proper day of our holiday, it was deemed a no-car day, and we walked down the valley into Aberfeldy for lunch, then returned via the Birks, a steep wooded gorge of the Moness Burn, popularised in a poem by Robert Burns.

After the Birks, there was a gentle downhill potter back to the cottage, through open wood pasture (mainly Birch), including a brief pause at a nearby pool spied through the trees.

We will return to the Birks shortly, as there's another ID freak-out in the offing...
Posted by Imperfect and Tense at 21:32

We were on the opposite side on your second week, Gairloch. On the shores of a remote loch we were enthralled by a grey Wagtail catching Dragonflies and feeding them to her young! I hope you don't find this offensive :)

Ah, there's always hungry mouths to feed. Funnily enough, we were driving home on Saturday, along a narrow single tracker, and I thought "I bet Mark's cycled up this road!" All will be revealed in due course.

Glad you were brave and stayed in a new cottage. Must be wonderful to have new knees, happy climbing. Thanks for the I D on a damselfly I spotted today. An Azure Damselfly. Lots were flying near a pond at Ickworth house in Suffolk. B

Maybe its a good thing to look without ID, to see thing differently. Glad I'm not the only person with a picture of a dead bird in their holiday snaps! We're just back from the Outer Hebrides

Hi Barbara, Oo, I'm ever so slightly envious, as there will be so many damsels and dragons in Suffolk! We went on lots of walks, not necessarily high ones or long ones, as it takes us ages to get anywhere, what with all the stopping to marvel at wildlife.

Hi Mrs UHDD, I've just seen your post with the white sands and azure seas. Lovely! I'm afraid my carrion beetle photo was a little gruesome, but the amount of life which was scurrying about on the dead bird was incredible. Nature's recyclers.