What makes for a rewarding job? Money? A worthwhile endeavour? Satisfaction at some defined result? There are probably many reasons, ranging from the safety and security of doing a regular thing, day in, day out, through the gamut of risk all the way to the fluidity of a new experience in a new place every day.

I am fortunate that the drift of my vocational choices currently put me in midstream of this work flow, with a small number of different tasks to perform, where the performance is to an ever-changing backdrop. The stage is never set.

Take this week, for example. It being Autumn, and my work ranging between 59 and 60 degrees North (for that, read Orkney and Shetland), my journeys between sites, and occasionally the sites themselves, have been illuminated by various natural history moments.

Monday saw me in the west mainland of Orkney, where a short trip between two customers in the late afternoon, brought flybys from firstly a Peregrine falcon with prey (probably caught over the nearby Marwick Loons) and then, a few miles later, a male Hen Harrier quartering fields close to the road I was using.

On Tuesday, an early start to catch an inter-island ferry saw me making the journey to Westray. By 9am, I was stood at the top of a ladder, listening to flocks of Skylark, Redwing and Twite as they passed overhead. I hasten to add that this isn’t why I was at the top of a ladder, it was merely a fortuitous consequence. Once back on terra firma, my customer pointed out three geese which were foraging in an adjacent field. Not, as I had blithely assumed Greylags, but White-fronted. Sadly, without bins, I couldn’t confirm this, but the Greylags do tend to congregate in much larger flocks.

With the arrival of Wednesday, I was back on the Orkney mainland, and all was rather quiet wildlife-wise, until the afternoon. There I was, in a housing estate in Kirkwall, terminating a cable for a customer, when I became aware of a gentle trilling sound. Predictably, I was on a stepladder. Turning around carefully and slowly, I scanned the vegetation in the neighbouring gardens until my eyes alighted upon a small flock of, maybe, half a dozen Waxwings. Wow! 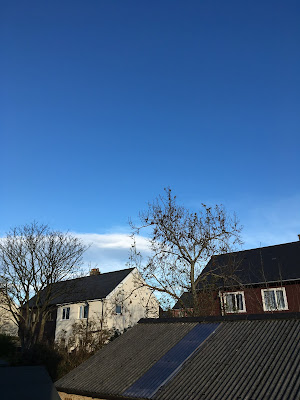 On Thursday, it was quite an early start to catch a peedie plane to the small island of Papa Westray. Regular readers will recall that I am of the opinion that there can be no finer beginning to a day, at least whilst fully clothed. Hey, it’s Autumn in Orkney, I was fully clothed! Once on site, there I was up a ladder, replacing a damaged satellite dish (“It’s an ill wind that doesn’t blow somebody some good”). I was being entertained by the island accents of several Wrens, whose softened song was altogether more laid back than their mainland cousins. In the surrounding fields, and in the skies overhead, flocks of Golden Plover called mournfully, whilst their burnished plumage caught the rays of a noontime sun. Not far from where I was working, maybe fifteen or twenty feet away, was sat a Rabbit. 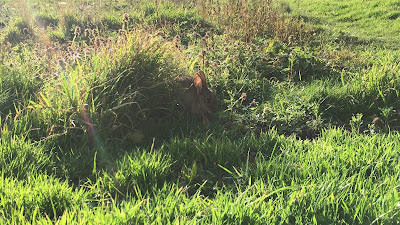 Sadly, here, I must strike an even more sombre tone as, although its eyes looked bright and its erect ears were glowingly backlit by the sun, the fact that it didn’t respond in any way to the noise of my power tools or the weird beeping of my satellite meter, made me wonder if all was not well. By the time I had tidied up beneath the newly-installed dish, my worst fears were confirmed. Quite quickly, the rabbit’s ears flattened to its body, its head lowered to the ground, its body keeled over and it was gone. At least for the last moments of its life, it had a bit of warmth from an Autumnal sun and some gentle murmurings from me. Upon death, I don’t know where bunny souls go, but I expect that its mortal remains would be found by either gulls or corvids or an assortment of sexton beetles. Soon there would be no trace left of the corpse, save for a fading memory in the mind of some soft blogger.

With a few hours to wait until my return flight, I wandered down to the shore by an old pier, wending my way between small fields full of thrushes and finches. As I retraced my steps, I popped in to see a wildlife-watching colleague who is always keen to practise his procrastination. During our conversation, I voiced, I think perhaps for the first time, a slight regret that upon leaving school, I had not considered a career in nature conservation or ecology. It can only be a slight regret, as my life has followed an interesting and entirely unpredictable trajectory, more worthy of a giddily-drunken pinball player, rather than some focused skeleton bobsledder. 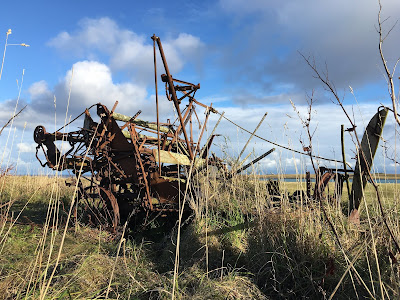 Friday found me in Shetland, working in Lerwick, after an overnight trip on the ferry from Kirkwall. The task was completed by mid-morning so, after a spot of office work at the desk that is my car, I took a leisurely drive over to the west side of Shetland to see if the incoming Atlantic rollers were catching the sunlight. They weren’t, and neither were there any Orca sightings being reported, so after another spot of office/car, I pootled back into Lerwick. Here, on the stroke of midday, as I drove through an industrial estate and past the power station, an animal made to dash out in front of the car. Fortunately, I was well below the 40mph speed limit, and the creature was able to do a swift about turn and regain the grass verge. Looking in my rear view mirror, I held my breath as it ran between my car and the van behind me. Once I realised that it was safely across the road, I was able to exhale and exclaim “Flippin’ heck, an otter!”

When, when, when will I fit a dashcam to my car, eh?

So, whilst I do not work in an ecological or an environmental role, in a way, I jolly well do.

Posted by Imperfect and Tense at 08:44

What a splendid bit of writing Tensey! I have been regularly going up to the Motherland now for 28 years and about the only thing I've not seen is an Otter- they're just eluding me! For some inexplicable reason while I read and pondered over your blog 'the hare that lost it's spectacles' by Jethro Tull blared out in my mind. How random is that!

Oddly enough, it was mostly written with an actual pen on actual paper, whilst waiting for a plane (Thu) and a boat (Fri). When the boat arrived, I was able to type up my scribbling into a Word document, and then this morning, with WiFi, log on to Blogger to upload text and photos to the interweb. Shetland still seems to be the place to go to see Otters, although they are declining apparently, due to (would you believe) road fatalities.

What a fantastic post! All those remarkable creatures. I love the wrens talking in their own accents. I have a friend who swears song thrushes have regional variation in their songs. I'm still waiting on an otter here so am very envious of yours....

Thank you, CT! Not every week is as spiffy as that one, nor do I usually have as much 'spare' time to fill with scribbling. Otters are tricky, I don't think that I had a positive sighting during our 23 years of living in MK, despite their presence. It's the old mantra of 'Right place, right time', I guess. We had a holiday in Shetland in 2010, and managed to see 4 otters in a fortnight, without trying too hard. And I've maybe managed that number in 5 years in Orkney. To be honest, most of our holiday destinations are chosen with the prospect of seeing some significant wildlife, occasionally at the expense of how comfortable the accommodation will be.