Snow Road, Part 2 - In the still of the early morning

Our plan to spend another day on the Snow Roads route had been hatched the previous evening. As we returned north on our way back to the cottage, we noticed a structure beside the A939 (the Old Military Road), near Tomintoul, which hadn't been visible on the outward journey. Intrigued, we decided that this feature needed more investigation.

My thoughts were that the earlier in the day we visited it, the better, before the Sun rose too high and lessened the effect of a deep blue sky. Plus, it would be cooler and less busy. And, for once, a cunning plan was bereft of small flaws.

As part of the Snow Roads marketing (which I guess is a response to the success of the NC500 route further north), there are three artworks located beside the road between Grantown-on-Spey and Blairgowrie. Although we didn't sample the third one, due to travelling no further than Braemar, the installation near Tomintoul was definitely our favourite.

The beginning of the experience was a little unprepossessing, if I'm honest, but that only heightened the pleasure of what was to follow. We parked beside the main road in a dusty lay-by, and I wondered if I'd ever so slightly over-egged the potential of the experience. 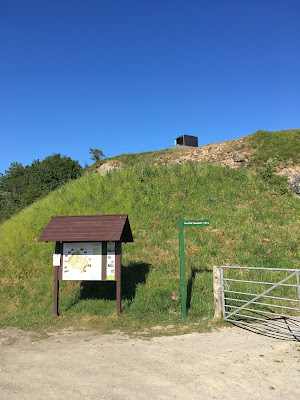 We followed the signed footpath, which took us by an old quarry, where our attention was temporarily diverted by a flock of Jackdaws. I wasn't sure whether the trees growing in the shelter of the quarry or the cliffs themselves were a roosting site for the birds, but they were thronging and 'chack'-ing for all they were worth. The noise echoed and reverberated around the hewn stone walls, in a rather other-worldly way. This likely had the effect of preparing me for what was to follow, as I'm not normally of a particularly arty frame of mind.

Carrying on up a gentle slope to the top of a low hill, whilst the sound of corvid capers gradually diminished, we found ourselves by a metal box, open at the front and rear, sat upon a base of stone gabions. 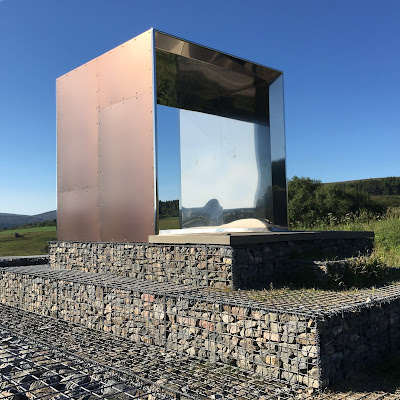 This is the sculpture known as Still, designed by architects Angus Ritchie and Daniel Tyler. The outer walls give a nod to the texture and colour of the materials used in stills for whisky distilling, illicit or otherwise, whilst the inner walls are mirrored to reflect the surrounding landscape.

As luck would have it, the sky was a deep blue, there were no other visitors, and so we spent a happy time just playing with different views and reflections. 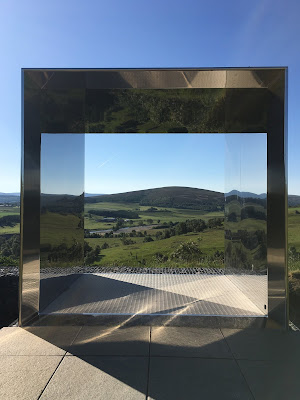 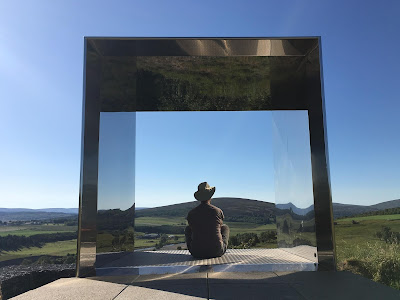 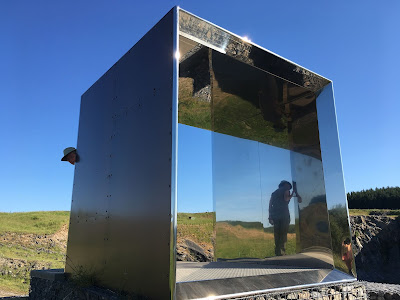 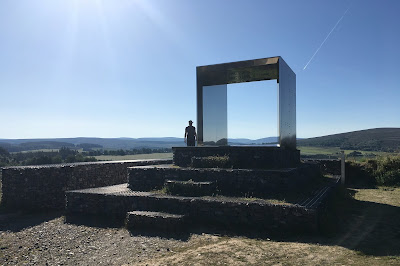 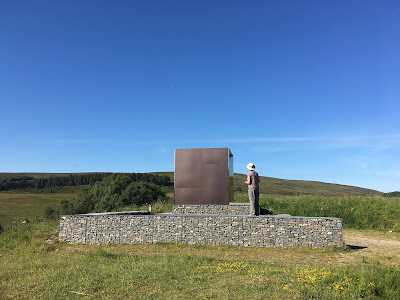 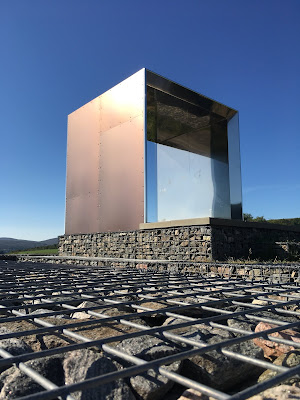 What a magical start to the day!

Posted by Imperfect and Tense at 09:00

Even a crusty old philistine like me was impressed!

That looks amazing and the effects of the reflections. Seems a really strange thing to plonk on top of a hill in the middle of nowhere.

Fear not, it's not too far from a tea room.