Our last full day in the foothills of the Cairngorm area was spent on another low level walk, making good use of the shade afforded by the pine forest. A gentle four and a half mile potter around two lochs was a fitting end to our holiday, and lived up to expectations in more ways than one. Loch an Eilein and Loch Gamhna are situated within the Rothiemurchus Estate and reached via a minor road off the B970 from Inverdruie. 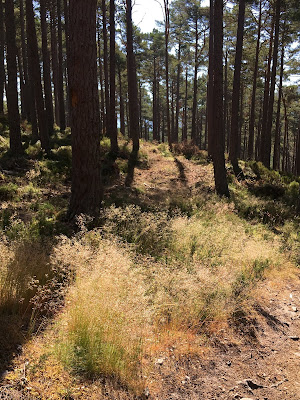 Setting off on a well-marked path, we skirted around the eastern edge of Loch an Eilein. There were plenty of Large Red and Common Blue Damselflies active already, as the morning was very warm. We were glad to be in the forest, although this made us susceptible to cleg attack. 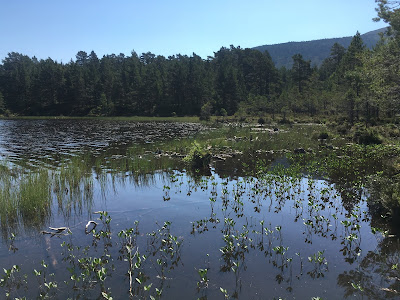 Before long, we found this nicely-vegetated bay which was alive with dragons and damsels, all busy either defending territory, mating or egg-laying. It was so hot that the insects were in turbocharged mode, which made photography difficult. Fortunately, one or two individuals did stop, briefly, for a rest.

Soon, we discovered the less obvious track which circumnavigates the smaller Loch Gamhna and we wandered into a habitat which appeared to have had a recent mass emergence of Common Darters. They were everywhere, perched on heather, bracken and trees. Many were quite fluttery, possibly taking their maiden flights, after spending a year or so as aquatic larvae. 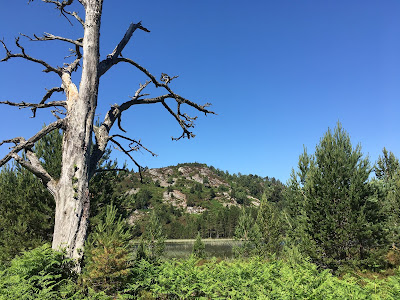 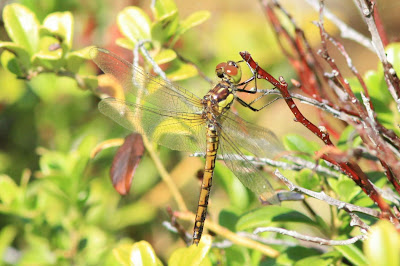 Also on the heather, we stumbled upon this huge green caterpillar, which is the larval stage of the Emperor Moth. 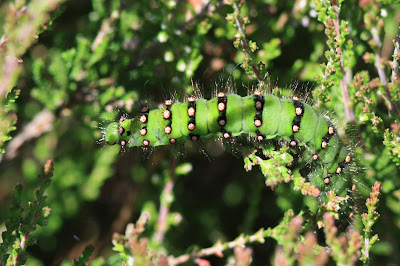 We stopped by a burn to eat our picnic lunch, and were joined by a pristine Four-spotted Chaser which temporarily halted munching duties. 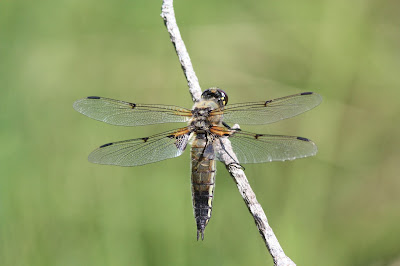 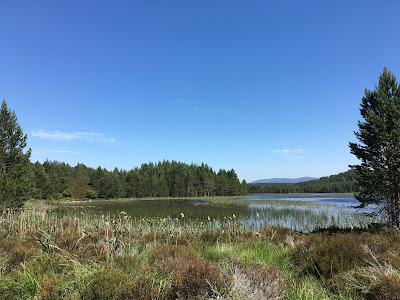 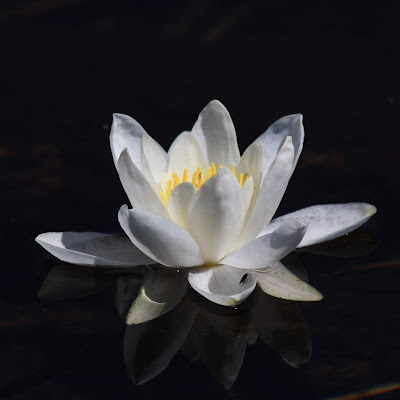 There were also views to the east, revealing the summit of Cairn Gorm, and snow persisting at height, despite the 30 degrees Celsius temperatures of lower altitudes. We would've loved to tackle this sort of terrain, but neither the heat nor our stamina were up for it. 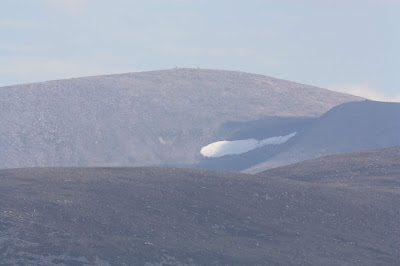 Returning to the main path around Loch an Eilein, we continued clockwise along the western shore, eventually coming to a glade where the pine trees were much older. An important constituent of many habitats is dead wood, standing or otherwise. Trees in this state are vital for biodiversity and the health of the forest, being home to all manner of invertebrates. If we clear away every 'untidy' bit of habitat, we unthinkingly remove so much of the natural world. 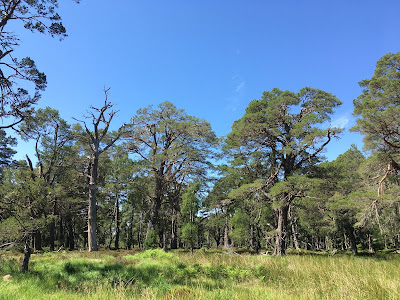 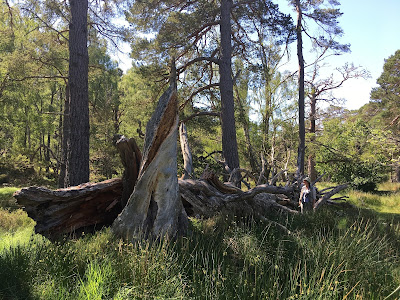 Nearing the end of the walk, we were treated to views of a ruined 13th Century castle on a small island in the loch, as well as another distant sighting of the Cairn Gorm summit. 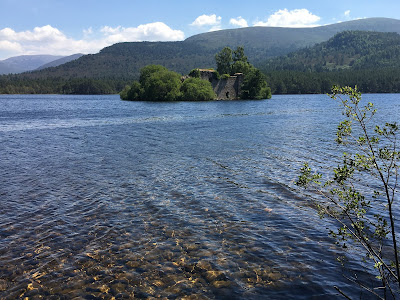 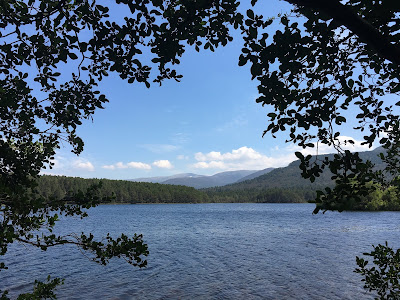 It was now baking hot, so we treated ourselves to an ice cream, before heading over to Loch Garten, where Our Lass was keen to see the nesting Ospreys. I loitered by a tiny bog pool, just near the viewing point, watching dozens of Large Red Damselflies and a single Four-spotted Chaser. After a while, I realised that there was another small dragon present, although when the larger Chaser spotted it, it would drive it away. It took me ages to have a good look at the smaller dragon, as it was continually being 'moved' by the Four Spot, and would perch just out of sight. However, eventually, I was fortunate and had a decent enough view to identify it as a mature female White-faced Darter. This was the first time I had seen this species anywhere other then the bog pool half a mile away!

After all our perambulations over and through these wonderful landscapes during the week, it was fairly inevitable that we would encounter one other creature which is resident there. On returning to the cottage, I discovered a less-than-welcome visitor in the form of a female sheep tick, Ixodes ricinus. Fortunately, we had come prepared with tweezers, which Our Lass deployed to good effect. 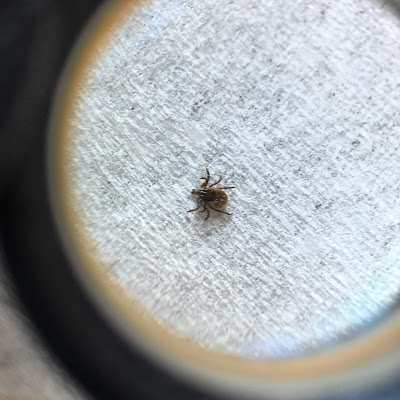 But let's not leave this post on such a dismal view.

Instead, share in the sight of wispy clouds in a deep blue sky, as your eyes gaze across the regenerating pine forest to distant mountain peaks. You'll have to imagine the treetop calls of a family of Coal Tits, the occasional clatter of dragonfly wings from the nearby pool and the pondering conversation of two folk wondering what they might have for tea. 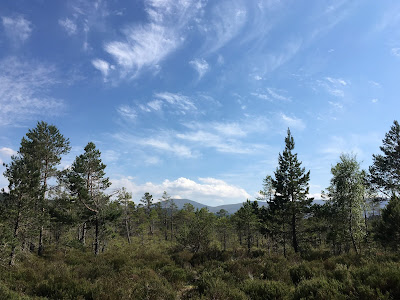 Posted by Imperfect and Tense at 11:20

I’ve been thoroughly enjoying your rambles along the snow roads and in the Cairngorms. Definitely a beautiful spot and amazing to have such heat. Wonderful photos of all the critters. B

Thank you! It was a lovely week. We hope to explore a different part of the area later in the year, though I doubt we'll see similar temperatures.

I've never known the Cairngorms be so hot....ever!!!