Beating the blues with some blue, reds, greens... and more blues

With gale force winds all of Saturday and Sunday, it wasn't much of a weekend for being out and about, let alone taking a leisurely stroll or a wildlife walk. Instead, I stayed indoors and set about compiling the Orkney dragonfly and damselfly records for 2017. This is a double bonus, because not only is it a useful addition to the data sets held nationally and locally, it also means I can spend a couple of days revelling in thoughts of a Summer past, gazing at some fantastic photographs and reading wonderful descriptions of folks' dragonfly experiences. Let's face it, at a time of year when the little loves aren't going to be on the wing again for another four months (at least in Orkney), then it's a small but welcome distraction from the long tail of Winter still to come.

Over the course of the 2017 flight season, which locally was from mid May until mid September, nearly three dozen people sent me 226 records of their dragon and damsel sightings, using all manner of methods. Some forward me their neat and tidy spreadsheets, others post photographs on social media, a few sets of handwritten records usually appear and then personal conversations, phone calls and emails account for the rest. Orkney is a small county, both in area and number of inhabitants, and its latitude also reflects this in the reduced populations of Odonata. However, encouraging folk to go out and look for these insects and then report their sightings are two of the central aims of my largely unofficial remit as the island's 'Mr Dragonfly'. 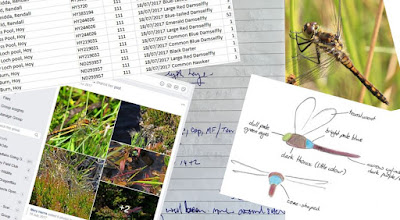 As you can probably gather from the low numbers mentioned above, compiling the records  is not an onerous task, but each record must be verified to check that an insect has been correctly identified and its location accurately noted. Cartographic errors do occur. Orkney sits astride two 100km squares, so annotating the wrong one puts the record on mainland Scotland or in the sea. It is also easy to transpose northings and eastings in a grid reference, or simply type one figure incorrectly, which will have a varying inaccuracy depending upon which significant figure it is. Correct identification of the insect is somewhat less of a problem, as the archipelago has only eight breeding species which are, thankfully, sufficiently different from one another. Well, for now at any rate. Yes, with the 'warm front' of climate change migrations heading steadily northwards, we will likely receive a few confusion species before too long.

Obviously, local recorders with much larger taxa, like butterflies and moths, have to plough through thousands and thousands of records each year. I really do believe that I get off lightly!

Once the data is compiled and submitted to the various official recording bodies (locally, the Records Centre in the Library, and nationally through iRecord) then I can begin writing up a report of the flight season for the Journal of the Orkney Field Club. I have to remember that it isn't a blog, and so must leave out my terrible puns, awful jokes, made-up words and general references to rock bands and lyrics. This is the difficult part!

And when that is complete, I can turn my attention to matters slightly further afield and create a presentation for an airing at the Scottish Dragonfly Conference in April. This will be my biggest challenge (and audience) to date, but at least it will keep me occupied through the cold, dark nights of February, my head full of dragony delights, facts and figures, and the occasional song lyric terrible pun.

Posted by Imperfect and Tense at 14:50

Came from Countryside Tales to look at your badger prints. I have a new allotment where my bulbs were dug up by something as soon as I put them in and I blame badgers. The only prints I've seen though are deep, round indentations in the soft earth. When we had snow I went to look but nothing had been disturbed.

Hi Lucy and Welcome! I'm afraid I'm not the gardening half of the relationship, but I recall that birds will pull up fresh bulbs if they have an inkling they're there or see the new shoots. Jings, Dorset to Halifax is a move and a half! It's certainly entertaining after a change of location, exploring the large number of differences and the occasional unexpected similarity.

Make sure you're not in a Rush.... aaagh that was bad.

Thanks, JD. Can we yet tempt you with the thought of an Orcadian position with a wildlife non-governmental organisation of your choice?

Good on you for doing all that recording. I used to do the breeding bird survey for the BTO and always made mistakes on the form, which, despite checking, I had missed. I was also a local moth and butterfly recorder and, as you say, with so many species it was sometimes a job to tell one from another. "what's flying tonight" on the hants moth website is a jem for moth ID.

I think you should add in some song lyrics to the conference presentation, my other half frequently does for this for work and people seem to enjoy it- the more obscure the better!

Thanks also for the badger print suggestion. Fairly certain they aren't badgers because of the size. Had a local ecologist look at the photo and he agreed mustelid and probably polecat, so that's exciting.

I am such a lightweight, but I keep thinking I should take on another group of wildlife (the local bees, wasps and ants guy is dropping BIG hints). I have now purchased a bee ID guide and an hoverfly one too, but remain unconvinced of my ability at ID-ing another bunch of whizzy, buzzy things. Good news re your polecat, wow!

I’m with you on bees in particular. I love watching them but unless it’s very obvious which species they are I come unstuck very quickly trying to I’d them. Maybe a local Id course would help? Worthwhile work though, recording them.

There was a locally run ID course a few years ago, which I couldn't attend due to work commitments. Although we have a reduced number of species here, some of them are dashed difficult to separate from one another. Note to self: Must try harder!

You might well tempt me but depends who with?!