I mentioned, a few SOMPs ago, that thinking of my favourite bands or artists, it is a difficult task for me to narrow down the track selection to a single song. This scenario is further complicated when, having finally made a choice, the track in question isn't then available from the media library with which one's mobile phone is aligned. This is a problem which requires a creative solution (rather than purchasing a different phone, as that would just be pandering to global consumerism).

Back in the day, when picture discs were all the rage, I bought the most pop-tastic, tune-catchingly commercial, multi-layered rock album of all time (possibly), 'Hysteria' by Def Leppard. 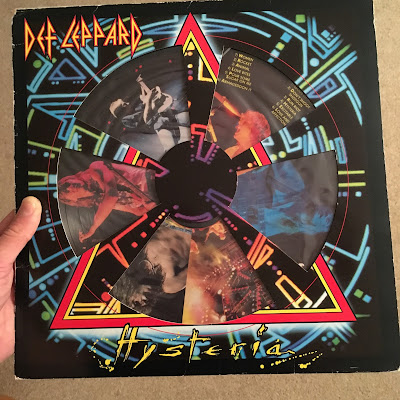 The Leps are a Sheffield band who were at the forefront of the new wave of British heavy metal (NWOBHM) in the late 70s and early 80s. They have gone global, had more than their fair share of tragedy and disaster, and are very much de rigueur in the Tense clan.

Certainly, as youngsters, First and Second Born were keen to explore the mysterious environment that was their dad's LP collection, and I can only assume that this picture disc was responsible for some of what followed. I suspect that if Second Born was asked to state her religion, she would devoutly admit to worshipping at the altar of Def Leppard.

Oddly enough, my favourite Leps track isn't on the 'Hysteria' album, though there are some stonking tunes on it (and seven hit singles). Nope, the song that holds me in its thrall is 'White Lightning' from the 'Adrenalize' album of 1992. This album was the first one released after the death of guitarist Steve Clark, and so featured some of his ideas and songs. His great friend and fellow Leps guitarist Phil Collen had to mimic Clark's style on the latter's guitar parts, in what must have been a poignant time in the studio.

'White Lightning' was an unfinished Steve Clark track, so Def Leppard used it to create their own tribute to their lost bandmate and his tortured soul. Whatever our temptation: alcohol, drugs, gambling or pleasures too numerous to mention, there's a salutary tale here for all of us. And a sonic smorgasbord of spine-tingling riffs from the one they called White Lightning.

But, as I said earlier, I can't download that track so, instead, it is a web link to a Youtube page (at least whilst there's still a Youtube).

Posted by Imperfect and Tense at 16:14

Good evening Mr Tense, yeah NWOBHM was a great time, as far as D.L concerned, great respect for the band but couldn't get into the American sound. That era was a great Heavy rock renaissance, sadly some bands of great quality never made it. The band Bruce Dickenson was in before Iron Maiden, Samson, were a class act.

Why did we rave so much over picture discs and coloured vinyl?! Happy days.

I saw Samson in the 80s (sometime 82-84, I think) when they were supporting a bigger act (can't remember who) in Middlesbrough Town Hall. I recall an excellent 'Duelling Banjos' type song, with the two guitarists back-to-back, leaning on each other as they played opposing parts. It was great stuff (and obviously more memorable than the headline act!).

Wow I saw them c.1980 in Lincoln's scruffy Drill Hall, they were superb in every respect. Bruce Dickenson later commented that their management made every mistake in the book and they were also horrendously messed about by record companies. Their first 4 albums are well worth a spin if you feel that hard rock edge, thing is I am getting a wee bit old for leaping around the lounge now :)