Not that sort of afternoon delight!

An early finish to the working day in Winter is rare. An early finish when there's still plenty of daylight is almost unheard of. But today, as though the planets had aligned, everything fell into place and we were finished by lunchtime. The sun was shining, the air was still and it felt... what's that word? Mild!

Predictably, after a few emails and some accounting, the sky had clouded over, but the urge for some fresh air was too strong. Grabbing my coat and bins, I set off for a walk around the St Nicholas' Kirk loop, the single track road that contours around to Greenwall, descends to the kirk by the shore, then climbs back towards Tense Towers.

The outward journey was rather bereft of wildlife, a small flock of feral pigeons feeding in a field and a larger flock of Starlings going through their dance steps before this afternoon's performance of 'Murmuration'.

As I sauntered down the hill from Greenwall, I noticed a bird several fields away, flying towards me from the shore. As I was gazing into the light, it was initially just a head-on silhouette, so I was unsure of whether it was a corvid or a raptor. The wing beat suggested the latter, and as the words "Hen harrier" formed on my lips, the sun broke through the clouds and I had a wonderful view of a flypast from a beautifully-plumaged male. There isn't a rational way of explaining how some grey, a couple of bits of black and a dab of white should combine to make such a spectacular-looking bird, but they do and it is!

I watched the harrier until it flew out of sight over the hill behind me, then continued down the road to the kirk. At the shore, there wasn't too much about as the tide was in, though a smart male Goldeneye was feeding in the breaking waves and a dozen or so Ringed plover were zig-zagging across the bay.

The kirkyard was thronging with birds. Every time I turned around from scanning the sea, the wall and many gravestones were topped by twittering, tail-flicking pipits. I suspect that the comparative warmth of the day had rustled up a large helping of insect prey.

In the damp fields behind the kirk, a large flock of Curlew and Redshank were gathered. They were quite vocal, presumably due to my presence, but my eye was taken by a movement on the shore side of the road, in the scrubby vegetation above the beach. A pair of Stonechat were flying to and fro, one minute on the ground, the next perched on a fence post. There was another bird, too, which revealed itself to be a Reed Bunting. The chocolate brown feathers on top of its head caught the light nicely.

As I returned to looking at the female Stonechat, a car pulled up, a lady taking her dogs for a walk. The animals barked and I was aware of the Curlews calling urgently, but this didn't spark any alarm bells in my head. Well, not until I was aware of another movement in my binocular gaze. Refocussing the lenses brought the hillside directly behind the Stonechat into clear view, a Peregrine falcon had just landed with a kill. Possibly one of the feral pigeons?

After a few moments, the falcon struggled back into the air, lugging its unfortunate victim away to somewhere quieter. The laboured flight meant that it couldn't gain height quickly and, as it disappeared from view, a Hooded Crow was mobbing it at close quarters, presumably safe in the knowledge that it was unthreatened from those talons!

Nearing home, clouds once more obscured the sun, but it threw some rays earthwards to further cheer the heart of this wildlife watcher. 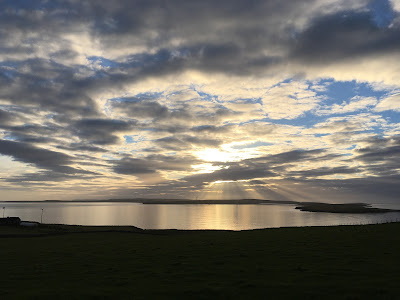 Posted by Imperfect and Tense at 16:36

Lovely descriptions. Having visited I can really see the view and I'm glad you got to see the Harrier. Do you always do the circuit that way around? I went the opposite way each time, but then I had a less interesting return leg.

The circuit direction is optional. I always used to go 'your' way round, but recently Our Lass changed direction (it was a convalescence thing) and I've stuck with that.