Back in the saddle

Ah, it felt good to be out in the fresh air again and mingling with the natural history. A crisp, bright morning, a little on the chilly side, but very welcome, nonetheless.

The priorities for the day were a walk and an eatery, so we chose Stowe Landscape Gardens as our destination, fifteen miles west of Tense Towers. However, our first port of call, en route,  was Foxcote Reservoir, where a pair of Long-tailed Ducks had been seen for the previous two days. These sea ducks over-winter around the northern and eastern coasts of Britain, so we were surprised to hear of a sighting just about as far inland as its possible to be in the UK.

The reservoir was as full as I have ever seen it, but bear in mind that I usually visit in the middle of the dragonfly season, so this wasn't a huge surprise. The first seasonal wildfowl we spotted upon opening the hide hatches was a male Goosander, his white plumage almost glowing in the morning sunlight. A few Goldeneye were present too, but we couldn't pick out the Long-tailed Ducks amongst the more usual Wigeon, Tufted Duck, Pochard, Teal, Mallard and Great Crested Grebes. Fortunately, help was at hand. Another visitor to the site had been diligently searching for them for several hours and had located the pair way, way, way across the other side of the reservoir, diving for food and hidden by a multitude of Wigeon. Our bins could just about make them out as two tiny shapes of a different pattern and colour to the surrounding duckage. Even deploying Very Wrong Len wasn't much of an improvement.

After an hour of waiting hopefully for them to swim closer, we admitted defeat and resumed our journey to Stowe, with thoughts of a hot mug of tea very much in our minds.

Wonderfully Oddly, the car park was barely half full. I guess everyone else was Christmas shopping in the cathedrals of commerce. By sheer chance, we walked into the cafe with four minutes to go before lunch was served, no queue at all and a tasty menu to peruse. Winner!

Suitably fortified against the cold, we pottered into the gardens and around the lakes, discovering another seven Goosander in the process. For early afternoon, the shadows were already long, creeping inexorably across the ground and towards the night.

As we completed the circumnavigation of Eleven Acre Lake, the sun lit up the Cascade and brought back happy memories of warmer times and dragonflies aplenty. Sigh. 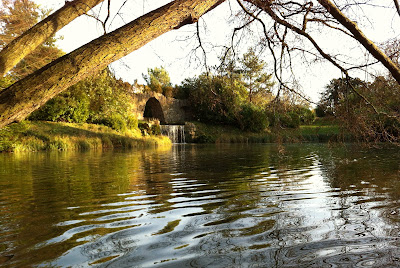 Taking the path along the western edge of Hawkwell Field, we climbed gently towards the Queen's Temple, stopping briefly to have a bijou pedantic rant about the sign shown below. I know what they meant but...  Grrrr.

After looping around onto Lord Cobham's Walk, we passed his Pillar and then the Gothic Temple, before descending to cross the Palladian Bridge.

This is where we spotted the Goosander, four males and three females, in fantastic late afternoon sunshine and quite near for such shy ducks. Yeah, I didn't have my camera. Before we could approach the side of the lake, a few children began throwing sticks onto a patch of ice floating on the water. The ducks swam off hurriedly, but bunched together for safety. At this turn of events, dark thoughts entered my head about how hacked off I would've been had I been carrying my camera, but then an amazing thing happened and I had to issue a heartfelt, if inaudible, apology. During the breeding season, we don't see such numbers of Goosander in this part of the world, so it was most pleasing to watch as the males became a little territorial over the females, with much vocalising and throwing back of their heads. The ladies were having none of it, mind, but it was interesting to see and hear their behaviour.

Reason enough to return to the cafe for a celebratory mug of tea and a slice of cake?

Oh, I rather think so.
Posted by Imperfect and Tense at 15:27

I think you spend more time in the cafes lol

Never been to Stowe or Foxcote.
Been a few Goosander at Caldecotte; and they've got a half decent pub there too. ;-)

Yeah, my brother reckons that if I write a book, it will be about tea rooms not wildlife!

After my remark to you about where are all the Goosander other than at Caldecotte, I then found out! I reckon I should've asked you what the winning lottery numbers would be :o)

That pub does do a good cup of tea and also hot chocolate. Apparently.

Cacen Cymraeg it is then.