Following days of heavy rain, I was expecting this post to be something of a dismal mudfest, but a brief window of sunshine appeared and gave everything a pick-me-up.

However, getting there wasn't straight forward. The Great Ouse had burst its banks and was happily acquainting itself with the whole of the flood plain, which meant that a few roads were closed as a precaution. Having negotiated this hurdle, we arrived at the wood to find the car park virtually full. Eh? What's all this? It turned out that today was a work party day for the BBOWT volunteers who help to manage and maintain the reserve.

Our chosen route didn't take us to the area of the wood where they were working, so the results of their handiwork will have to remain a discovery for a different day.

Plodding on, we found ditches that are usually empty, were full to the brim. The ground amongst the trees was waterlogged and, at the northern end of the wood, a stream had overflowed across the field to the woodland edge. 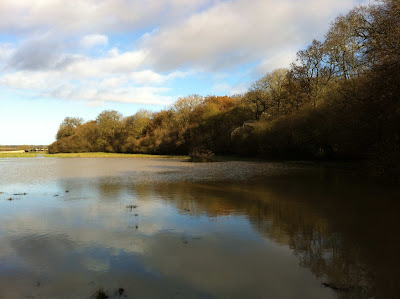 Left of centre in the above shot can be seen the old buildings where the Little Owl often roosts...

As we walked along the hedgerows on the west side of the wood, flocks of Redwing and Fieldfare flew overhead and a pair of Grey Partridges sprang up from under our feet and whirred across the field to disappear into a winter crop. Meanwhile, a Fox was busy sunning himself on a ridge in the next field.

Looking back towards the wood, we noticed that the predominantly deciduous nature of the trees had one rather obvious exception. 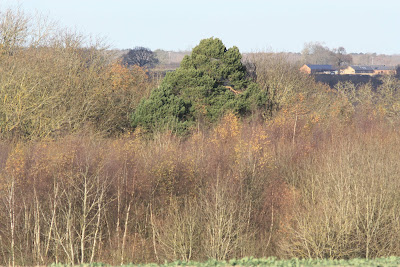 Now that most of the leaves have fallen from its neighbours' branches, this Pine adds a touch of greenery to proceedings. 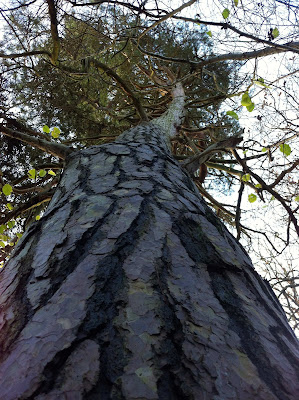 Concern continues to grow regarding the impending likelihood of five wind turbines being sited  to the west of Little Linford Wood. Several miles to the east, the existing installation at Petsoe End is clearly visible from the wood's car park, as the following photo shows.

Posted by Imperfect and Tense at 21:48

Do I feel a paradox coming on. Now far be it from me to even delicately nudge a fellow nature lovers conscience, but - above we have a less than complimentary description of the planet eating road to hell (© C Rea)- whilst below, we have the adventures of a globe treking ode hunter (who therefore presumably spends quite a lot of time and fossil fuel on said black stuff).

I look forward to your attempts to introduce Somatochlora arctica to HESC next spring!

Ah, Tony, you rascally rascal, I see what you did there!

Yes, I completely agree with you. Had I complained about the M1 then that would've been a paradox (or should that be 'paradock', if there's only one of them?).

As I wasn't born when the stretch of motorway that runs passed the wood was built, I couldn't have protested at the decision, unless we invoke a temporal paradox of Star Trek proportions.

But which of them affects the wood more? Is the shock of the new at odds with our acceptance of the old? For those are the questions I was raising.

Incidentally, the Grey Partridge sighting may be of interest to you as it occurred on the exact spot of one of the proposed turbines. This species is on the Red List of Birds of Conservation Concern, due to a breeding population decline of more than 50% in the last 25 years. A useful piece of data? You're welcome.

For the record, as a major polluter, I happily pay more fuel duty and road tax because that is a legitimate tool to use in weaning us off our dependence on fossil fuels. No argument.

As you well know, before a species of dragonfly can be relocated from one place to another, both the UK and European conservation bodies require a whole host of sampling, trials and data regarding the species, the donor site and the recipient site. There's just no way I can process all that paperwork before next Spring, you big silly :o)

However, there is a real possibility that another Emerald species, Cordulia aenea, could colonise HESC from nearby Northants. Tree-lined ponds with much leaf litter? It could happen!

I expect the grey partridge has been bred for shooting, by the same farmer that is grasping for the blood money he will get for having the turbines on his land :o(

Nevertheless I will pass on the information :o)

Not sure how you infer that land owners are captive breeding Grey Partridge when surveys of farm land show huge declines in the numbers of birds. I think that's more of a pesticide and agricultural practices issue.

“The grey partridge is no longer the prolific gamebird it once was. In most districts it is
now either absent or uncommon. In these circumstances partridges should not be shot.
The only exception is where careful management has produced a shootable surplus.
Some properties still produce these surpluses in good breeding years and, provided
not more than 30% of the autumn population is shot, the harvest is sustainable”.

Q: Why can’t we solve the problem by releasing game farm birds?
A: For two reasons. First, the partridge has declined primarily because arable land has become inhospitable through agricultural intensification, so restoring the habitat should always be the priority. Second, hand-reared partridges do not behave naturally in the wild and are very vulnerable to predators. Even those that do survive usually fail to breed in subsequent years.

You went to a game website rather than the RSPB? Now I'm shocked.

Where is the duel taking place?
Swords drawn at dawn!!!!!
or perhaps shotguns should be the order of the day

Captain Sundial, is this you? I think that the only shooting Tony and I will be contemplating will be with a camera!

As a magnanimous gesture of goodwill and friendship I will concede all previous points to you - provided - you agree that:
a) there is incontrovertible evidence of gamebird rearing in the vicinity of LLW (feeders,pens, pheasant and RL Partridge trying to commit suicide under your tyres) and
b) anyone stupid enough to plant a windfarm there is hardly likely to be able to tell the difference between a RLP and a GLP once it has been driven into the air by the beaters.

Here rests the case for the persecution.

In all the years I have been visiting LLW, this is the first pair of Grey Partridge I have seen there. Admittedly, all this proves is that I'm rubbish at spotting Grey Partridge, but it's a fact. The majority of birds seen along the track to the wood are undoubtedly benefiting from the feeders: Tree Sparrows, Yellowhammers, Reed Bunting, Greenfinch, Chaffinch and Goldfinch. Not your typical shooting fare (unless you're in Malta?).

Of course these are the first ones you've seen - they shot all the others!

What you won't be seeing so many of, will be gamebird preditors such as raptors, owls,fox,weasel, stoat, etc because they will be controlling them as well.

Hence their master plan to save on cartridges by letting the windmills kill the owls and raptors. Hah!

Are we even talking about the same wood? There's plenty of foxes, buzzards and owls. Which is another fact you can use to your advantage. Honestly, if you're going to leave all the evidence gathering to me, I'm not sure why you are protesting in the first place. And they're not mills, you must be thinking of Camberwick Green :o)

Oh God! it's worse than I thought - they're breeding foxes for hunting as well :o)

That's probably as good a place as any to bring things to a close. Thanks to all for crafting a longer Comments section than original blogpost!