Today's post is brought to you by the letter...?

Our last morning in the Broads area of Norfolk, in search of the elusive Swallowtail butterfly and Norfolk Hawker dragonfly, saw a subtle change in tactics. Following minimal success at one nature reserve after another (and encouraged by our chance odonatological encounter at  a picnic site), we opted to visit Fairhaven Water Gardens in South Walsham.This ticked most of the boxes for Our Lass: woodlands, water, plant sales and tearoom, whilst also having reported sightings of both our target species.

For some time, the weather forecast had been predicting rain for this day, so we were encouraged by the amount of sun on offer. So much, in fact, that we were glad to be in the shade of the woodland. This also had the effect of providing shelter from the wind, so that in sunny glades were gathered all manner of dragonflies and damselflies. Eu-flippin'-reka!

By one of the wide streams, we watched a male Broad-bodied Chaser patrolling his territory, returning time and again to his favourite perch on a stick at the water's edge. When a female Broad-bodied Chaser appeared, there was a brief chase, an equally brief consummation of their passions and then she immediately began ovipositing, with her paramour flying above her, as she repeatedly dipped her abdomen in the water to lay her eggs.

Hawking above us and roosting on the huge leaves of Gunnera manicata, were some larger dragonflies. Big and brown, with a characteristic yellow triangle on their abdomens, these were indeed Aeshna isosceles, Norfolk Hawker. Phew! Not keen to trample all over the ornamental flower beds, I had to be content with a shot from range... 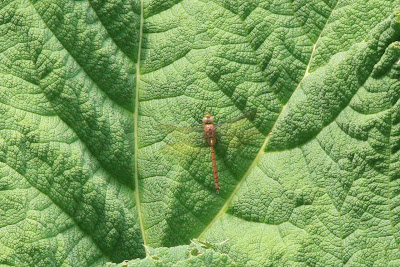 There were no Swallowtails to be seen, though, so our last roll of the dice was to visit Wheatfen Broad, a reserve set up by the late Ted Ellis, naturalist, writer and broadcaster. Wheatfen is a tidal marsh of the Yare valley, and of all the wildlife sites visited over the weekend, this felt the most natural. It is actually just across the River Yare from RSPB Strumshaw, which we had visited two days previously, but the feel of the place was completely different and we relaxed even more as soon as we stepped foot on its springy paths.

A young chap told us he had seen a Swallowtail, not ten minutes before, on a part of the reserve called Smee Loke, so this seemed as likely a place as any to start our search. Whilst there were Flag Iris, Ragged Robin and Milk Parsley aplenty, and many dragons and damsels, there was no sign of the butterfly. Now, it is arguable that dragons are large, mythical creatures, but for this particular weekend, that description better fitted the Swallowtail, as I did begin to wonder if it existed at all.

Whilst sat on a bench in the shade, each of us contemplating our lack of lepidopteran success in our own ways, a movement to our right caught my eye. It wasn't a butterfly, it was a bird, and quite a familiar bird at that. However, it wasn't one that I expected to see in the middle of a marsh, surrounded by reeds and water. For there, in the lower branches of a bush, was a Jay, a bird more usually seen in deciduous woodland featuring plenty of oak trees.

To my regret, I've never been able to take a great photo of a Jay, they're pretty wary of humans and I've not  been quick enough on the draw whenever the opportunity has arisen. They are probably the most glamorous of the UK's corvids, so I took a few shots but, predictably, the twigs of the bush were obscuring various bits of the bird. When the Jay dropped to the ground and out of sight, I went back to wallowing in Swallowtail misery. Eventually, we decided to walk a bit further around the reserve, and as we were headed in the direction of the Jay bush, we quietly crept forward. The Jay was foraging through the undergrowth and hopped further away at our presence. I kept taking photographs, despite the intervening vegetation, more in hope than anything else, and then a very strange thing happened.

The bird flew through the reeds towards us and landed on a post by the path. In clear view, it sat there for a while, its head turning this way and that as it searched for food. We held our breath, not daring to move, the only sounds to be heard were the breeze swishing through the fen and the repeated click of a camera shutter. 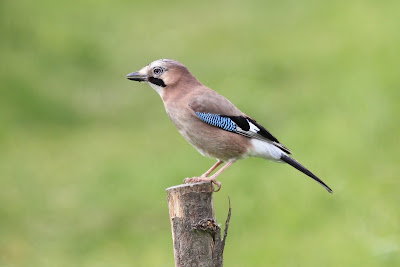 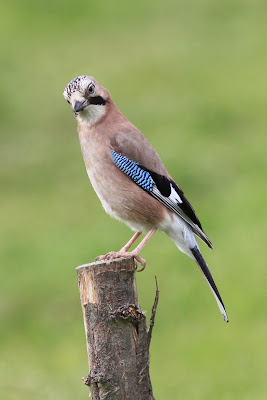 Butterflies? You can keep 'em!
Posted by Imperfect and Tense at 13:42

"Are you edible then? If not, keep quiet while I look for food"
Lovely photos. I hope it was a good weekend despite the lack of flutterbies. I saw a Swallowtail yesterday btw and need to start trying to identify these 'ere French butterflies.

Lovely capture of the Jay.
They have such good in-built radar......they spot me a mile off!

Drat you, Martin! That was a low blow :o)

Keith, I still can't believe it landed so close. I was tempted to fill up the blog with all the rubbish ones I'd taken previously, just to ramp up the tension!