I'm struggling with yet another cold at the moment, which has somewhat curtailed my wildlifey wanderings. Recently, my most athletic activity has been squeezing oranges for fresh juice.

However, safe in the knowledge that every cloud has a silver lining, I'm sat at home staring out of the window into the garden.

Editorial note: I am informed, by those who know, that fluffy white clouds aren't as friendly on the inside. In fact, if they do have a lining of precious metal, it's because someone has seeded them with silver iodide to make it rain.

So what's been visiting Tense Towers to cheer up the curmudgeonly old scrote?

Well, one or two Brimstone butterflies, which is always a joy. Sadly, none of them stayed for any length of time, certainly not long enough for me to shuffle off to fetch my camera and take a photograph. A male Blackcap came to the seed feeder this morning, but again, it was whilst I was sans camera.

This little fellow turned up, and had the decency to loiter around whilst I fired up the Canon. My first sighting of the year for a Bee fly. 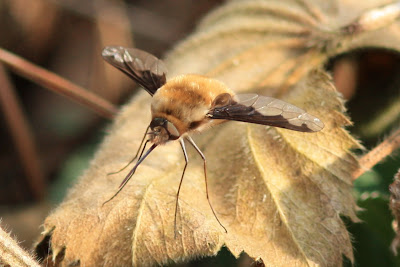 I had always assumed that they were predators of their eponymous brethren, as we have often watched them following the movements of bees. But it seems that they aren't intent upon ramming the unsuspecting bee from behind with that fiercesome-looking proboscis after all. The adult Bee fly feeds on nectar, so may simply be following a bee in the hope that it will lead to a food source. Alternatively, it could be attempting to locate a nest where it can lay its eggs, as the larvae parasitise solitary bees.

It's a little known fact (cue blatant lie), that this behaviour was first described in the lyrics of a well known music hall song from 1907, which originally had a chorus that went: 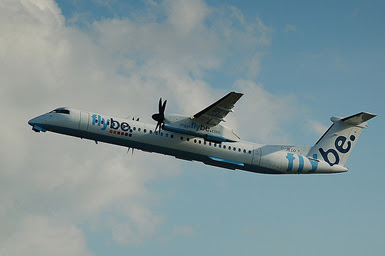 You're right, dear reader, I need to check the dosage instructions on my cold remedy.
Interestingly, on Friday, I was given a good piece of advice on how to treat the common cold. The only two requirements are a hat and a bottle of whisky. Treatment involves placing the hat on the end of your bed, clambering into bed and drinking the whisky... until the hat moves.
Posted by Imperfect and Tense at 12:03

Hi Graeme .. hope you feel better soon .. I expect the whisky will run out shortly and you'll have to get up and scrabble around for another bottle.

Thanks, Hilary. True to my gender, I'm just a wuss when I have a cold. Still, if I have to sit and watch the lawn grow, I can only marvel at how green and fresh it is at this time of year. A rich, verdant look, that highlights the yellows of the primroses and daffodils. Truth be told, I can't stand whisky, but it is Our Lass's tipple. She enjoys going on distillery trips as I invariably accept the offered free shot and have to pass it to her, after she's downed her own, of course.

..no wonder you still have the cold then... maybe a little sampling of the aforementioned tipple to find one you like would go a long way ;). Of course there is an alternative method - you could hide the whisky under hot chocolate, in a toddy, or hold your nose and swallow rapidly!

Here is to the hat moving, Cheers!

Cheers, Martin, or, er... Salut? I have now discovered a bottle of ginger wine, so things could be worse!