Nature! Huh! What is it good for?

The first day of August sees us down at the local nature reserve. At least I think that's where it is, because the habitat maintenance contractors have been in and, boy, does it look different. Whilst I won't claim that "habitat maintenance contractor" is an oxymoron, their work is often compared to that other great landscape improver, Genghis Khan. Finding a small corner that seems to have been accidentally left untouched by the Blitzkrieg, the Admiral, our lass and I busy ourselves searching for invertebrates recovering from PTSD.

Suddenly, the Admiral lets out a shout and points behind me. I turn round, half expecting to see Martin Sheen (stop it, now) but it's even more interesting than that. No helicopter gunships, no Wagner (oh for God's sake...!), but sitting on a Teasel head is a Silver-washed Fritillary butterfly, my first one. It doesn't stay long in one place, dodging from flower to flower, though the only things shooting at it are 3 cameras. However, you could hear Wrong Len laughing hysterically in the background. 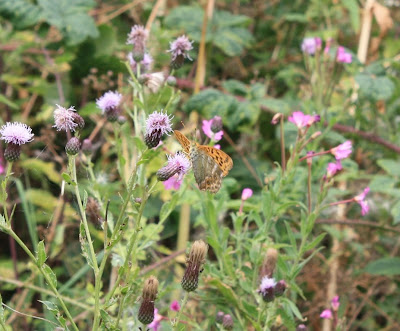 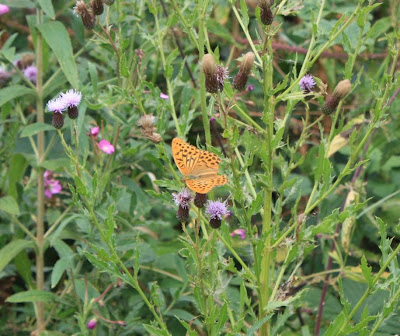 Apparently, renegade lepidopterists have been releasing this species behind enemy lines, so its provenance is a little shaky, but this soldier ain't complainin'.

Further into the reserve, in another brashcutter-devastated area, we discover a Ruddy Darter that has attacked a Common Blue Damselfly, knocking it out of the air. The tussle lasts a few seconds and then the darter appears to lose interest. The damselfly eventually flies off, seemingly unharmed. 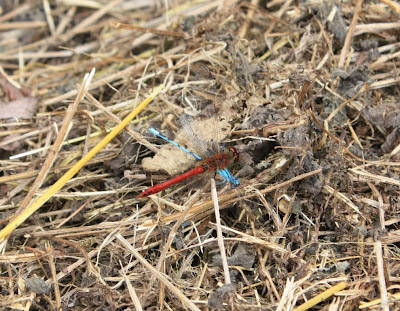 But what about the mental scars, eh?
Posted by Imperfect and Tense at 22:06