I have to admit that I did not manage to attend any gathering for the Global Climate Strike on Friday 20th September 2019. Nearly, but not quite. I was working in Shetland that day, and didn't finish the task in time to hotfoot it back into Lerwick for the noon meeting at the Market Cross, attended by about 100 folk.

I did, however, find time later in the afternoon to visit the Why Waste shop to purchase some less environmentally-damaging cleaning products and cosmetics.

The previous evening, before heading out to catch the night boat to Shetland, I had managed to capture another ephemeral sky moment across Scapa Flow. Later, pondering how to caption the photo, the words 'there's a hole in the sky' came to mind, which I recalled were sung by Ronnie James Dio on Run with the wolf, from Rainbow's Rising album. However, I decided to research the phrase anyway, in case there was a more apt use of it in the musical canon.

Oh boy, was there ever! 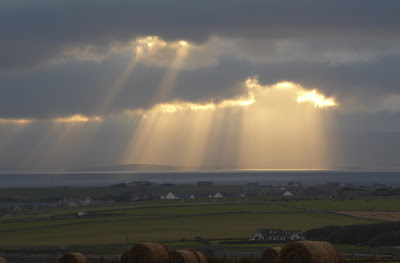 Up until this point, I knew very little about the Grateful Dead, other than they were a band that began in the mid 60s. My lyric search turned up the line 'there's a hole in the sky where the light pours in' from a song called We can run from the 1989 Built to Last album. This seemed a neat fit for my image. Then, oh jeez, then, I read the remainder of the lyrics...

We don't own this place, though we act as if we did,
It's a loan from the children of our children's kids.
The actual owners haven't even been born yet.
But we never tend the garden and rarely we pay the rent,
Some of it is broken and the rest of it is bent
Put it all on plastic and I wonder where we'll be when the bills hit.
We can run,
But we can't hide from it.
Of all possible worlds,
We only got one:
We gotta ride on it.
Whatever we've done,
We'll never get far from what we leave behind,
Baby, we can run, run, run, but we can't hide.
Oh no, we can't hide.
I'm dumpin' my trash in your back yard
Makin' certain you don't notice really isn't so hard
You're so busy with your guns and all of your excuses to use them.
Well, it's oil for the rich and babies for the poor,
We got everyone believin' that more is more,
If a reckoning comes, maybe we will know what to do then.
All these complications seem to leave no choice,
I heard the tongues of billion speak with just one voice,
Saying, "just leave all the rest to me,
I need it worse than you, you see."
And then I heard,
The sound of one child crying.
Today I went walking in the amber wind,
There's a hole in the sky where the light pours in
I remembered the days when I wasn't afraid of the sunshine.
But now it beats down on the asphalt land
Like a hammering blow from god's left hand
What little still grows cringes in the shade like a bad vine.
Songwriters: Brent Richard Mydland / John Barlow
We Can Run lyrics © Universal Music Publishing Group, Kobalt Music Publishing Ltd.
The echoes of these words from 1989 are still as fresh and even more urgent, thirty years later. If you have not yet done so, can I please ask that you watch the short film Protect, Restore, Fund, featuring Greta Thunberg and George Monbiot. Thank you.
Posted by Imperfect and Tense at 11:28

Will watch that today. Will have to check out GD I have a blockage with most American music, though the lyrics are quite affecting to say the least. When I was a young Yobbo in the late 70'S early 80's - I had the cover of Rising painted on to the back of my denim jacket and wore it with pride.

Ah, those were the days, eh, Mark? in the late 70s, my school haversack was painted with the 'ELP' logo. By the 80s, when returning home on leave, 'A Light in the Black' would usually be on the car stereo... "I'm coming ho-o-ome!Coming ho-o-me!" Hmmm, that sounds better than it types :o)