The annual Orkney Nature Festival is being held this week, and I went along to one of the  events, at Yesnaby on the west coast, hosted by the Orkney Field Club. The Club was marking its 60th year with a walk along the clifftops and through the maritime heath habitat where Primula scotica can be found. This delicate wee flooer is endemic to the north coast of Scotland, in Sutherland, Caithness and Orkney. It is also the emblem of the Orkney Field Club.

Our walk took us by a sea stack known as Yesnaby Castle, before we left the sandstone behind and set off south along the granite-bouldered path. 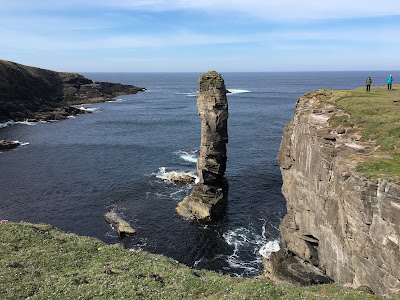 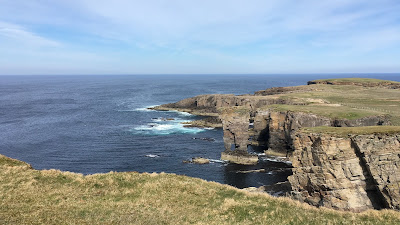 Skuas soared by, both Arctic and Great, tracking the coast and keeping an eye out for a chance to steal a meal. We walked on, through swathes of pale blue Spring Squill and the occasional Tormentil, Lousewort or Milkwort.

Eventually, on a windswept clifftop, we stopped to search for our diminutive quarry and were rewarded with many leaf rosettes and a few plants in flower. 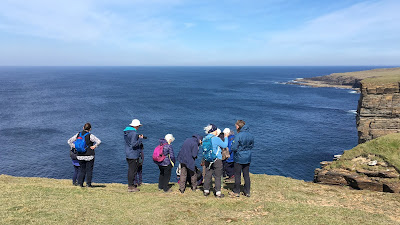 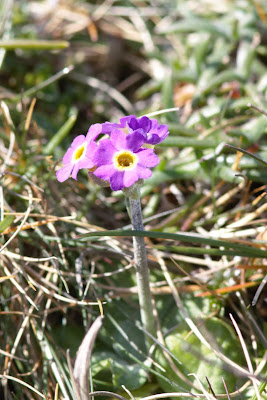 Primula scotica has two flowering seasons, usually one in May and the other in July. Some plants flower in just one, a few in both, but most do not flower every year. This year, after an unseasonably warm early Spring, and a current spell of very dry weather, Nature seems to have hurried on with some things and delayed others. Certainly, we would have expected to see more Scottish Primrose flowers in May, but perhaps we had found ourselves in the species' floral interregnum.

We walked on a little further, to another sea stack, North Gaulton Castle, and spent a while watching two climbers as they made their ascent. 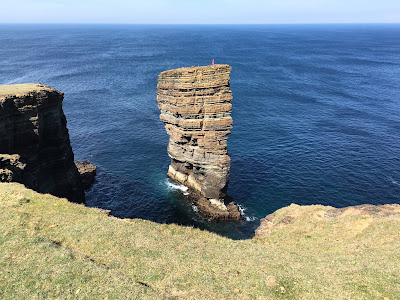 On the return journey, we encountered another flower, which was a first for me, Mountain Everlasting. I suspect that it probably grows taller in more favourable habitats, but here on the clifftops it is very small. It has separate male and female plants, and the botanical experts among us spent a goodly while discussing the gender and characteristics of various blooms. The ID guides are very rigid upon which flower is male and which is female but, as in many things, Life's a bit more complicated than that. In the end, it was mooted that perhaps an LGBT group was required for the plant. 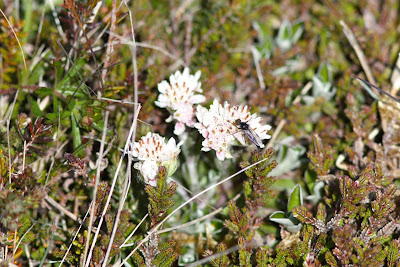 A secondary target species for the day was a rare beetle, Chrysolina latecincta ssp Intermedia, which has a very limited UK distribution. This is a beautifully-marked black beetle with striking red stripes along the edges of its wing cases. It feeds on Sea Plantain in Orkney, and its only other known UK sites are on the island of Unst in Shetland and by Loch Etive in Argyll and Bute. Sadly, again, the early Spring warmth seems to have allowed it to complete its life cycle much sooner in the year, so we were unable to find a single individual.

Posted by Imperfect and Tense at 09:09