Yesterday evening, I had to give an update to the members of the Orkney Field Club, who were present at the club's AGM, regarding the progress, or lack thereof, of Scottish Natural Heritage's project to preserve Orkney's wildlife from the ravages of non-native stoats.

I have mentioned the stoat problem before on this and other blogs, and the more I read about island biogeography, the more I worry about the endemic Orkney Vole population and a whole raft of threatened ground-nesting birds.

Indeed, at last night's event, passions were running high. A range of emotions were on display, from sadness at the likely fate of island wildlife if SNH don't get a shift on, through impatience at the lack of proper feedback from the statutory NGO who should be dealing with the issue, to anger that there doesn't appear to be any big movers and shakers engaged with the problem.

It's all enough to make the most optimistic of us weep.

So, to lighten the mood a little, and as it is unknown how stoats first arrived in Orkney in 2010, I have done a wee bit of research into one possible method of transmission.

Remember that absolutely amazing photo from 2015, taken by a chap called Martin Le-May, in Essex? 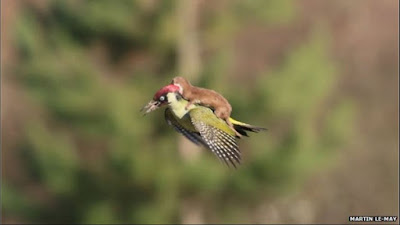 Well, a brief perusal of the distribution of Green woodpeckers in Great Britain from way back when to the present (as indicated by records submitted to the NBN Gateway) produced the map below, with the most recent records in orange and red. 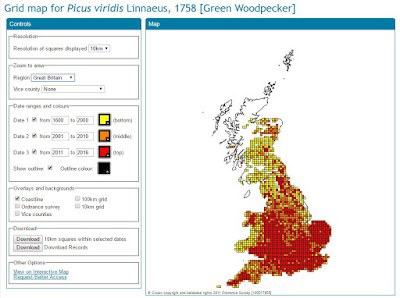 Whilst perhaps not conclusive proof that stoats didn't arrive in Orkney by this particular aerial means, I think we can strike 'introduction by Green woodpecker' from the list.

Posted by Imperfect and Tense at 18:24