That post header would make a great title for a book, eh? Ho hum.


But this tale is one of kindly kidnapping, when Our Lass whisked me away for the weekend as a  birthday treat. She discovered a great B+B in the village of Hope Bowdler, near Church Stretton in Shropshire, and we spent a few days enjoying the scenery and wildlife in a previously unexplored corner of these secret hills, even though we've been visiting the area for nearly 20 years.

Our host, Patrick, showed us a footpath that would take us into Church Stretton, so that we didn't have to set foot on a tarmac road. As well as the opportunity for relaxed walking, this also meant that we were able to leave the car behind for the day.

With Our Lass not ready for the big ascents and descents that this region offers, we meandered our way between the hills at low level and down into the town. This allowed me the chance to take a few landscape shots on the way, something that had never been a priority when our girls were young and the subject of most photographs. With the introduction of Wrong Len, followed by Very Wrong Len, my focus then switched to close ups of wildlife, so it was about time that I stood back and looked at the wider picture.

In pre-Roman times, there were several hill forts in the area, perhaps the most famous being Caer Caradoc, to the north east of the town. However, after the local tribes were subdued by Rome's finest, a road was driven through the valley, and in later times a settlement built up beside this route, including an Anglo Saxon church.

As you'd expect, the church of Church Stretton has plenty of history associated with it. After the Norman conquest of 1066, the new masters had the church rebuilt. Interestingly, the Anglo Saxon building workers, who presumably still had some pagan beliefs, were able to insert a fertility symbol into the wall above the North door. This took the form of a sheela-na-gig, a female figure carved in stone. 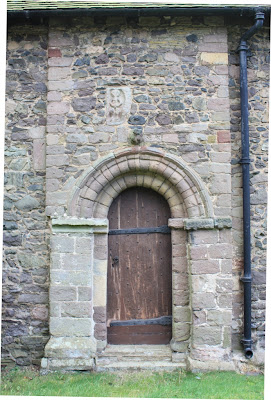 Wisely, Our Lass promptly dragged me away from the churchyard, before any ancient vibe began to resonate through the mixed bag of emotions that is her husband.

Our return journey to the B+B passed along the southern foot of Caer Caradoc and then across a saddle between Helmeth Hill and Hope Bowdler Hill. This gentle 400' of climb, through open woodland, was enough of an ascent for the pair of us, so during the subsequent catching of breath, I had the opportunity to photograph Caer Caradoc to the north. 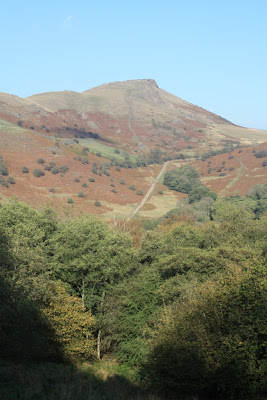 Back in the village, we explored its churchyard, finding a gravestone from 1751 and an avenue of Yews (an avenyew?), before pottering to the B+B and enjoying the late afternoon sun in the garden.
Posted by Imperfect and Tense at 18:47

Avenyew :0))))) ooo dear that's one thing that doesn't improve with ah hem err ..... as you have probably already realised from me. Lovely snaps

Sorry, I just couldn't resist it!