Belated Happy New Year to you all. The slight interruption to service was due to a trip north to the Land of the Prince Bishops, but more of that in a future post.

This morning I was "home alone", Our Lass sloping off to work and Second Born walking out with her young man. Even the Admiral was otherwise engaged, so I thought I would pop to the local nature reserve for the first time this year.

The lakes have been frozen solid for some time, therefore there hasn't been many recent reports of wildfowl sightings, but there were a few breaks in the cloud so it seemed like a good time for the inaugural outing of Very Wrong Len.

Following a slight overnight dusting of snow, temperatures were still very low, so I wasn't expecting to see much in the way of liquid water. Oddly, a few shallow pools on the bund were ice free and offering sanctuary to several species of dabbling ducks, Mallard, Teal, Wigeon, Gadwall and Shoveller. The diving ducks just hadn't bothered to show up, as they would've needed crash helmets.

It was turning into a very quiet morning, with little to see and even less to photograph, but I remained hopeful of a sighting of something out on the ice. A fox perhaps, or a Water Rail, if I was lucky. Certainly a few corvids, some Crows and Magpies, were making use of the frozen conditions to patrol the lake margins, on the off chance of an easy meal if an unfortunate Moorhen or Coot had succumbed to the cold.

Whilst sat in the Far Hide, feeling some sympathy for the proverbial brass monkey, I noticed a vague brown shape, hugging the bank, way, way over on the other side of the lake. Presuming I'd finally had a bit of luck, I raised my binoculars to what I assumed was a fox or a deer. Yes, it was a bit of luck, but no, it wasn't either of those creatures. My frozen little brain had to guess again, but aided by a sudden shot of adrenaline, neurone after neurone was screaming "Bittern!" Cold fingers scrambled for my camera to capture a record shot, because I was about as far from the bird as it was possible to be. The Bittern was walking on the ice, along the edge of a small reed bed and soon disappeared from view.

Closing the viewing hatches as fast and as quietly as I could, I headed for the Near Hide, presumably named for just this occasion, as it was definitely much nearer the Bittern, though still on the opposite side of the lake. Once inside, I resumed my scanning of the reeds and after a few minutes the bird reappeared walking back in the other direction. I watched it for about half an hour, as it stalked and hunted its way along the bank, often losing sight of it for minutes at a time as its camouflage is perfectly suited to this habitat and vegetation. 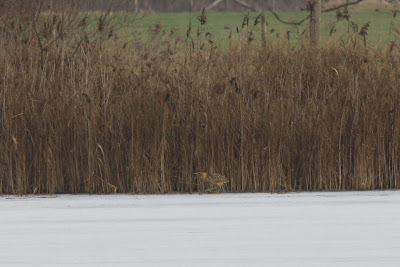 At this distance, approximately 200m, I was doubly glad I'd brought along Very Wrong Len. In fact, if he continues to find Red Data List species, I may have to christen him Very Right Len.
Posted by Imperfect and Tense at 14:10

One Bittern, Twice Shy,
Len on target, worth the try,
What is next?, where will it be?
Probably in the land of the Brass Monkey!

Hey, Dr Jelly! You got the rhyme,
a solid thesis and the bug to climb.
Though perhaps you ain't as surprised as me
To find some rapping, 'stead of po-et-ry.
If I had a lyrical, I could wax it,
Be all technological and even fax it.
But to be honest, man, this ain't so good,
I'm a country boy, not a guy from the 'hood.
So now I've got to find some rhyme to dish up,
To explain to y'all, Who is the Prince Bishop?