Cold Caldecotte is a real hotspot

As this looked like it was going to be the last fine but crisp day for a while, we thought we'd visit Caldecotte Lake in the south of Milton Keynes.This water body is not normally on our radar, but it is excellently blogged by Keith, who puts in the hours and reaps the wildlife benefits.Some of his recent posts have included several sightings of a Water Rail.

Now, Our Lass has often heard the squealing call of the Water Rail, whilst out and about on our jaunts, but never had the good fortune to spot one. It's a rather secretive bird, mainly skulking out of sight, in the undergrowth by the water's edge. To be honest, I have only ever seen one of them myself, so this seemed like an opportunity not to be missed, as the big freeze meant that they would have to forage on the ice.

Other projects limited us to just an afternoon's trip, so we opted to make best use of the remaining available light and only walk around the northern half of the lake. As we set off from the car park at the windmill, there was very little open water to be seen. However, our first stroke of luck came at the flood defences by the river, the concrete culverts allowing us close views of a Grey Wagtail. 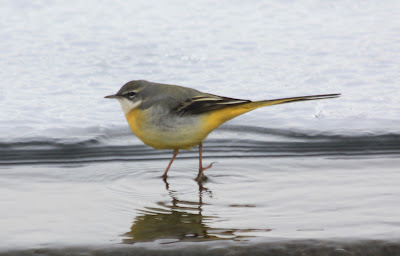 Moving on around the lake in a clockwise direction, I was surprised to see, in the distance, an animal digging in the snow. Even through binoculars, it wasn't immediately obvious what it was, as the hole was deeper than the creature was tall. What could it be? 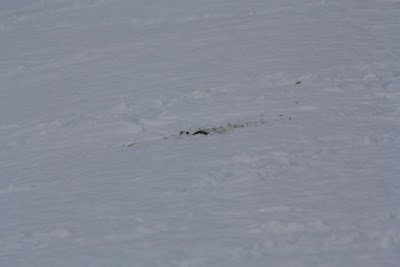 Our patience was eventually rewarded, when the ice miner was revealed to be... 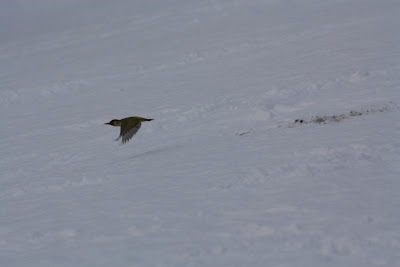 a Green Woodpecker. How the heck did it know what was under the snow? And if it was an ants' nest, how frozen would they have been?
At the next set of flood defences, there was a small patch of open water, where most of the local waterfowl had gathered, Mute Swans, Coot, Wigeon, Gadwall, Pochard and a few Mallard. Away from this, a group of Moorhens were busy foraging, scuttling about on the ice, dashing in and out of the marginal vegetation. Eventually it dawned on me that one them wasn't. Wasn't a Moorhen, that is. It was the mythical Water Rail of aquatic legend. It seemed to sense that it was being watched and headed for cover, so I was unable to bring my camera to bear without a branch or a twig getting in the way of the photograph. I may have uttered an inadvertent oath.
Just before we completed our circumnavigation of the north lake, another Rail appeared out on the ice. 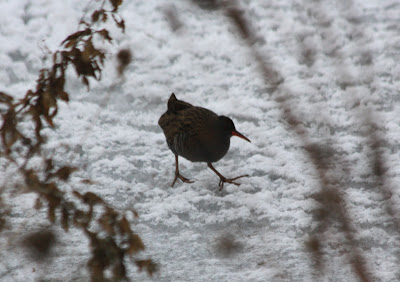 Not the greatest pic in the world, but a life tick for Our Lass and by far the best view of one that I've ever had. Our thanks to Keith for the heads-up on this cracking bird.
Posted by Imperfect and Tense at 18:45

Thanks for the mention Graeme; and glad you got to see the Water Rail. The second footbridge you come to is also a good place to spot them.
The Grey Wagtail is quite a regular at that spot near the weir. Great shot of him.

Thanks, Bob and Keith. Our Lass and I were musing last night, on the peculiarities of her "First Rail". Often a life tick is encountered when a species is in the wrong place, or we have travelled to some far flung place to see it in its natural habitat. Having lived in MK for several decades, sharing the area with Water Rails, having heard but not seen them on countless occasions, it did feel a bit odd, and all the more special for those reasons.