It's on the cards

Despite having plenty of time to blog in recent days, the opportunity has gone begging, though not for any surfeit of partying or revelling. Santa brought me a head cold which has forced me to remain indoors, staring miserably out of the window, rather than going for brisk walks on crisp paths, through woods and fields.

Motivation has been a bit lacking too, mooching about and relying on the cricket commentary for entertainment. Today dawned bright and clear, which only ramped up the frustration at my exile from the outside world.

I offer this as a possible explanation for what happened next. I'm embarrassed to admit that I started birdwatching our Christmas cards. Perched around the lounge were numerous images of winter scenes, which I methodically studied for ornithological interest. Predictably, you will not be too surprised to read, there were loads of Robins, from the twee cartoon types to the superbly-photographed one, sat amongst frost-laden twigs. However, two cards stood out from the background noise of red, white and brown ruddockness.

The first was an RSPB card showing an almost lifesize Goldcrest on a branch, set against a dark starry sky. In the painting, the buds on the branch and the bird's legs are picked out in gold, which contrasts nicely with the black background. Thanks, J, that really cheered me up.

The other card was much smaller, only 11cm square, from my RSPCA supporting in-laws. The painting on the front is entitled Winter Wildlife by Avril Haynes, published by Otter House. 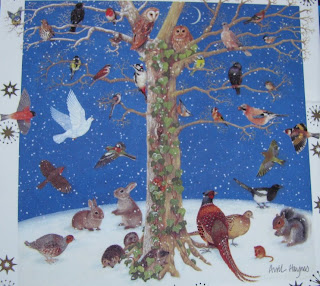 Interesting the pair of male Chaffinches and no females. Is it a Mistle or Song Thrush, hard to tell in the photo? and if they are going for a red theme then why put in the male GSWdpkr, rather than a juvenile?
Thanks for the amusement :)

What consenting chaffinches get up to in the privacy of their own nests is probably beyond the scope of this blog :o)