Someone pinch me! It's a Bank Holiday weekend and the sun is shining, the Doc has said I can resume normal life (not sure what this actually means?) and we've been to a National Nature Reserve for the day.


After several years of cajoling by the Admiral, we finally went to Woodwalton Fen, a NNR between Peterborough and Huntingdon. It's only about an hour from home, so no excuses really. Height above sea level is zero, as the OS map handily pointed out. This made me realise that, despite being inland, Woodwalton Fen is in the front line of the battle against rising sea levels. We're all moving nearer the coast, folks. A fragile and ephemeral environment indeed, though with its oaks and poplars it looks so permanent and solid. On the warmest day for weeks, it turned into a bit of an Odofest, lots of damsels and dragons. The pick of the abundant Scarce Chasers being this almost-mature male. 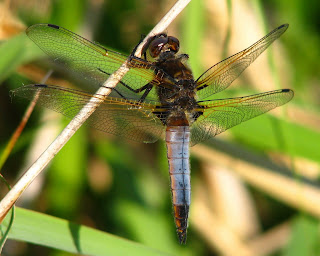 We also clocked up a dozen or more Hairy Dragonflies and Four-spotted Chasers, two Black-tailed Skimmers, a Banded Demoiselle and a whole host of damselflies, Azure, Large Red, Blue-tailed and Red-eyed. For good measure, in the early evening sunshine, we spotted a male Marsh Harrier quartering the fields and heard the full-bodied and clear song of a Nightingale. In a gentle breeze, the Admiral navigated us to a pub at Holme, the aptly-named Admiral Wells, to replenish our tired but happy selves.
Posted by Imperfect and Tense at 11:30

I visited this site this week for the first time - lots of Scarce Chaser but all immature males/females - not lucky enough to get a mature individual. It seemed to be a cracking little reserve and well worth another visit soon.

We were very lucky on Saturday, I think. Out of nearly 100 individuals seen, only two were males approaching maturity. Fortunately, this particular one was both the most mature and nearest the path! Both were seen near the car park, one from the bridge and one near the thatched information thingy. Yep, I reckon we'll be back too.