The other day, I received a report of a damselfly in an odd location. The damselfly was in an odd location, not I. Looking up the supplied grid reference, I could see that the pool was very near the coast, but the species in question, Blue-tailed Damselfly, can stand a bit of brackish water by all accounts. The recorder also recommended that I wear wellingtons if I was going to plodge about there, as the pool was a bit smelly.
Monday morning, after a look at the week's weather forecast and a discussion with Eagle-eyed M, a decision was made to go and look NOW. The area was Rerwick Head in Tankerness, a place I had not previously frequented. Within a few minutes, we had found the pool, it had plenty of emergent vegetation, was popular (even on a cool blustery day) with craneflies and hoverflies, but very not with damselflies. The water was a thick brown colour, the mud smelly and not even a Blue-tailed Damselfly was going to call this home. We reckoned the sighting had been a fly-through, and we pottered off along the clifftops wondering what else was about.
Lots, as it turned out.
Every sheltered hollow had a few Common Blue butterflies and Meadow Browns. Several of the Browns were rather amorous. 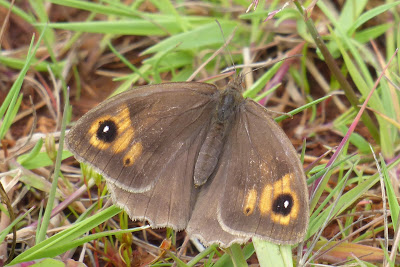 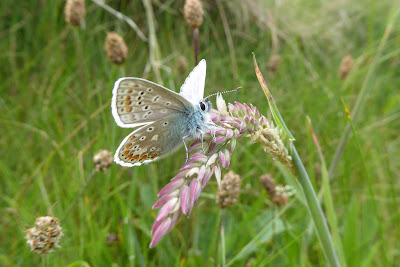 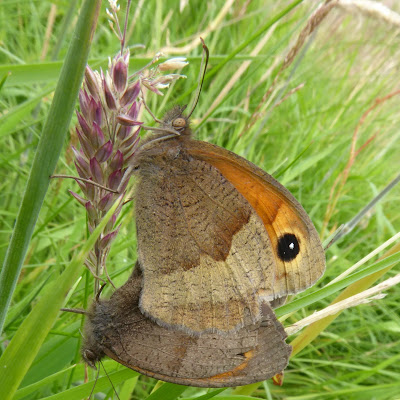 On the cliffs, Black Guillemots were sat about, looking very dapper, making their shrill calls of sanguineous song. 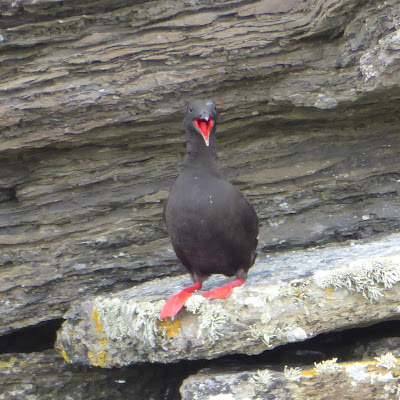 We followed the wildlife's lead and took shelter, sitting in one particular hollow to eat our lunch. The occasional Red Ant wandered over the rocks, and another tiny creature appeared on one of my wellington boots. 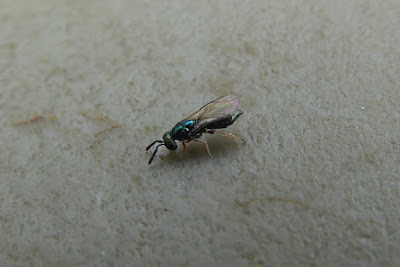 It really was quite small! Unfortunately, from these photographs, it is impossible to ID the insect to species, or even Genus. However, according to the good people of the Bee, Wasp and Ant Recording Scheme, it is a chalcid wasp of the Family Pteromalidae. My curiosity always falls short of needing to take a specimen for ID purposes. In my book, the thirst for knowledge should not be blood-thirsty. 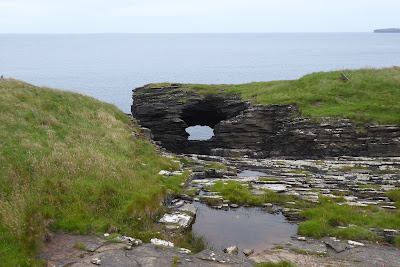 The hollow was by the Hole of Roe, a spectacular... er... hole in the cliff. It is about 15' high and 12' across and is 25' above beach level. The rocks here were quite different from elsewhere in Orkney. The cliffs were weathered in a way that made them look like mille-feuille pastry, whilst the rock surface undulated as if a series of waves had turned to stone. For the last 60 hours, I have had the strangest hankering for a large vanilla slice.
Posted by Imperfect and Tense at 21:38

The guillemot has a surprising call that is not consistent with its appearance. I don't know exactly what I would expect - but something deeper I think.

Good to see the Tysties out and about, and in good voice.

Lucy, it is very distinctive and can be heard over the crashing of the waves, possibly because it is so high-pitched (now that I think about it, as are the calls of other frequenters of water like Kingfisher and Dipper). There's something so very wonderful about a Tystie. The white and balck and red combo is stunning, a bit like an auk-shaped Mondrian.

Caroline, I think the only folk not pleased to see a Tystie would be Butterfish!