End of an era

After a rather stormy night (gale, hail, thunder and lightning), this morning we awoke to discover that our landline and associated broadband had been knocked out. We've been here before, eh? Coupled with that thought, there were sad scenes at the local Library and Archive yesterday, as social media guru and madcap librarian Stewart Bain, put in his last shift before leaving for pastures new. The moment was captured for posterity and plastered, appropriately enough, all over Facebook. See here.

Upon viewing the video, Our Lass (who was already at a low emotional ebb worrying whether Second Born would make it to Orkney for the festivities before Storm Barbara intervened) promptly burst into tears.

[Sobs] "It was when he stroked her face!"

Which neatly brings me to a shameless repost of an earlier blog from three years ago, when we were sans broadband and falling in love with the books and IT possibilities of Orkney Library and Archive. See here.

And here's the Library's blogpost from yesterday.

Right, I'm off to hide, before Our Lass figures out how to log on to the satellite broadband feed and reads this.
Posted by Imperfect and Tense at 17:57 6 comments:

I took this photograph yesterday, when I should've been working... 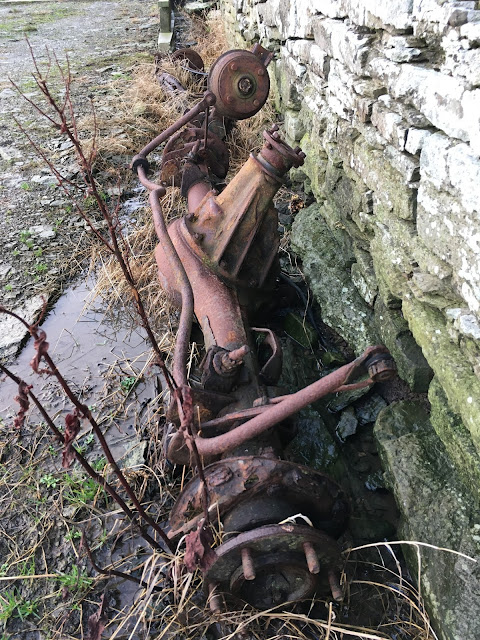 Posted by Imperfect and Tense at 19:38 6 comments: 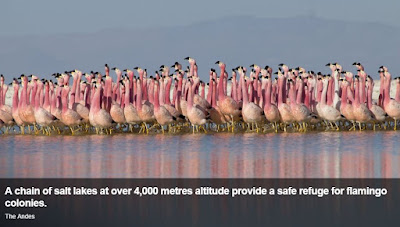 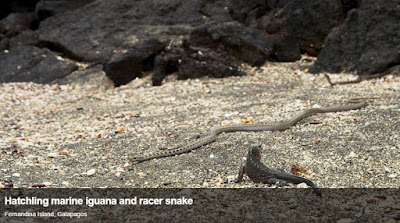 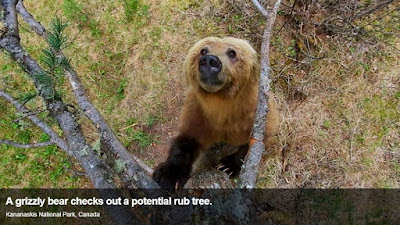 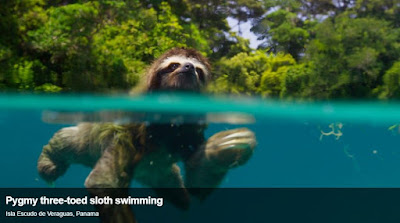 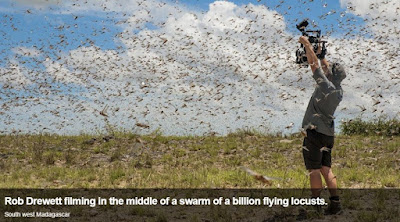 Posted by Imperfect and Tense at 21:49 8 comments:

My week in skies

OK, I admit it, I've been sky-ving at work again. Well, at this time of year, the non-work time tends to be dark, so when else am I supposed to get my fix of cloudscapes? Apart from the weekend, obvs.

The use of the car roof as a reflective medium was accidental. Apologies that it's not in Focus, as it's a Fiesta.

Posted by Imperfect and Tense at 17:14 4 comments:

"So he laid down and he died"

Is it OK to title an obituary post with such a line, even if it is taken from the last verse of one of the recently-departed's earliest compositions?

Here are some prophetic words from 1969, which still resonate in the present, from the King Crimson track 'Epitaph', sung by Greg Lake.

"Knowledge is a deadly friend
If no-one sets the rules.
The fate of all mankind, I see,
Is in the hands of fools."

On Thursday, this week, it was this song which sprung to mind in the numbing silence and hollow blackness I felt on hearing the sad news of Greg's passing. I was going to write that his voice and lyrics scripted my late teens, but that would be woefully inaccurate. Jings, the guy influenced my world view for decades, mainly along with his fellow band members of ELP (Keith Emerson and Carl Palmer) and also his song-writing collaborator Pete Sinfield.

In 'Battlefield' from ELP's Tarkus album, it was clear that he didn't warm to war:

"Clear the battlefield and let me see
All the profit from our victory.
You talk of freedom, starving children fall.
Are you deaf when you hear the seasons call?

Religion got short shrift, too, in songs like 'Mass' (Tarkus) and 'I Believe In Father Christmas' (eventually released on Works Volume 2), but a few lines in 'Hallowed Be Thy Name' (from Works Volume 1) showed a, maybe, subtler understanding:

"You needn't be well to be wealthy
But you've got to be whole to be holy."

There were early signs of environmentalism in 'Knife Edge' from ELP's debut album in 1970, but perhaps Greg's most ecological song was 1992's 'Black Moon' from the ELP album of the same name:


"Just take a look around the world
The future never waits
We're skating on thin ice
And we're in the hands of Fate.
What we need's a little re-direction
To find our blue lagoon.
You know, it wouldn't come
A moment too soon.
Black Moon."

Any of these lyrics would be a fitting epitaph, I reckon.

Posted by Imperfect and Tense at 21:11 2 comments:

Over the course of this weekend, I have visited the coast near home on three separate occasions. The first two were walks with Our Lass, as part of her ongoing convalescence from knee surgery, the circular trip featuring a good mix of ascent and descent in its two and a bit miles. The final visit was me on my own, with just a camera for company.

Have a guess when I saw all the good stuff?

Saturday saw us postpone lunchtime until we'd walked down to St Nicholas' Kirk, by the shore of Holm Sound. It was a better day than forecast, with much more sunshine than expected. Not particularly warm, mind, but with only the gentlest of breezes. As we neared the kirk, flocks of birds were taking to the skies from the shoreline, a sure sign that something had spooked them. Sorting through the gulls, waders and ducks, we eventually spotted the culprit, a Peregrine falcon, which made several passes along the beach in an attempt to grab a meal.

As we began the climb back towards home, some pools in an adjacent field contained a couple of dozen Teal, the males looking especially resplendent in the low Winter sunlight. Turning our gaze back to the road, we just had time to see... something... disappear into the grass verge. It was probably a Moorhen, but in the brief view available, my instinct said Water Rail. I've not heard the call of one of these elusive birds in Orkney, never mind seen one, but this occasion would have to be chalked up to 'Unknown'.

Hardly had we recovered from that when, in the field on the opposite side of the road, we spotted a stoat running hell for leather towards cover. It disappeared into the verge for a while, before reappearing on the road and then scampered up the hill in front of us. This was the closest sighting to date to Tense Towers. When we eventually lost sight of it, it was headed for the wet pasture where, in a few months time, waders will be breeding. Not a happy thought. Further up the hill, a small flock of Golden Plover were sat in a meadow. As with the Teal, the light made their plumage positively glow. Absolutely gorgeous!

Today (Sunday), we repeated the walk, though a little earlier in the morning. Again, as we approached the kirk, we were rewarded with the sight of a cracking bird, a male Pintail, preening on the rocks just offshore. A little further along the road, I stopped to listen to a pleasantly calming sound, the rhythmic clacking of stones and pebbles, as a flock of waders prospected for tasty morsels on the beach below. They don't call them Turnstones for nothing!

By the time we returned home, the skies had clouded over, but after lunch things brightened up once more. Needing no further inducement, I grabbed my camera and headed back kirkwards. The tide was in, the light was better than ever, but there was no sign of the roll call of birds from the previous two visits. Gah!

Not to worry, there were still signs of life to be enjoyed...

Posted by Imperfect and Tense at 16:52 2 comments:

At this time of the Orcadian year, the working day with sufficient available light is much shorter. The most important tool in my toolbox ceases to be a 13mm spanner and becomes a head torch. And dragging oneself out into the darkness of a Winter's pre-dawn is slightly less enjoyable than skipping out into a mid-Summer blaze of sunshine.

One day this week saw us headed to Westray for some dishy action (satellite tv and broadband installations). The ferry departed Kirkwall at 07.20, so here's a photo taken as I potter along the harbour at about 7am. The inner harbour is where the pilot boats berth, as well as the RNLI lifeboat (just out of shot to the left). 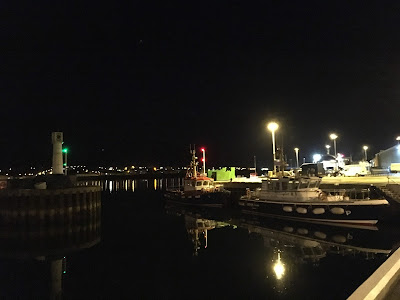 The weather was calm and dry, allowing good progress to be made. This is important, not just from a business and financial perspective, but also because if there's time during the day, I like to pop in to a general store on the island. The eclectic (and necessary) mix of goods and provender in quirky juxtapositions never fails to cheer me up. On this particular day, I was not disappointed. 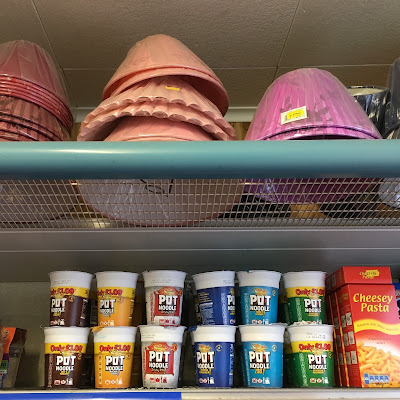 As luck would have it, although it could've been due to skill and teamwork, we were finished before sunset and sat waiting expectantly at the Rapness pier for the return ferry to Kirkwall. There's always a small doubt in the back of one's mind that it might not appear... 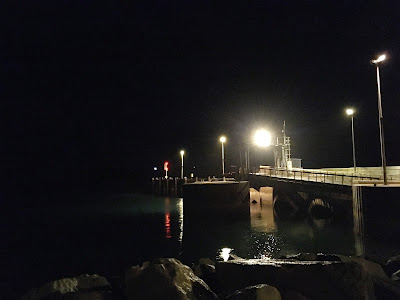 Posted by Imperfect and Tense at 16:18 No comments: