With the further relaxation of restrictions in Scotland on the 15th July, it became possible for travel between the islands of the Orkney archipelago for non-essential reasons. Quite rightly, up until that date, the inter-island ferries and aircraft had been limiting passengers to key workers and the like. I won't be drawn into a discussion as to whether the chance of seeing a dragonfly for the first time in eleven months counts as 'essential', but Eagle-eyed M was sure that going to see the White-tailed Eagle chicks on Hoy before they fledged was nothing short of a national emergency.

So, on Saturday morning, Our Lass, M and I boarded the mv Hoy Head for the sailing to Lyness. As this was public transport, we were all sporting face masks of various kinds. Our plan for the day was quite flexible, because the weather of late has been a bit unpredictable and we couldn't be sure where the best spot for Odonata would be. However, as the time-sensitive part of the mission was '"Before the chicks fledge!", we headed straight for the Eaglewatch car park on the Rackwick Road.

For 2020, this pair of White-tailed Eagles has nested in the original nest from several years ago, rather than the one used in 2019. Either way, the distance from the car park to the cliff face of the Dwarfie Hamars is just over half a mile, making photography something of a challenge. As we were using a car, I had brought along my tripod, DSLR camera and Wrong Len, but the strong breeze still made this an interesting challenge. Tucking the tripod into the lee of the car, with one leg jammed between wheel arch and tyre seemed the most suitable option. Even so, the shots weren't great. Here's a couple of crops from the hour or so we spent there, staring into the sun and struggling to see the camera screen.

This is the nest site, an eagle chick is busy flapping its wings to exercise its flight muscles. Honestly! It's in the centre of the image, just below a white spot of lichen on the rock face. 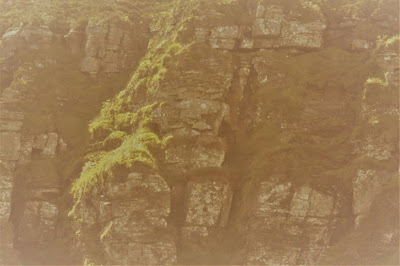 In this second photo is an eagle which M saw flying in. It is perched just to the right of a small sunlit bush in the centre of the image. At the time, we couldn't be sure whether it was an adult or the other chick, but M contacted the local RSPB warden who was able to confirm that neither chick had yet fledged, and that sometimes only one can be seen on the nest, with the other tucked away at the back. 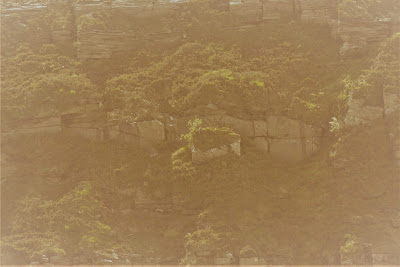 There were various options for good sites to look for dragonflies, but I will admit to feeling quite trepidatious, for as mentioned above, my odo diary indicated that it had been eleven months to the day since I had seen a dragonfly. No pressure. The strong breeze meant that the pools on Wee Fea would have no shelter at all for delicate aerial predators, nor indeed their prey. Similarly, the pools behind the beach at Rackwick would also be exposed to the full force of the wind. So we headed for a couple of pools adjacent to a burn which meanders out of this valley between Berriedale and the Red Glen. 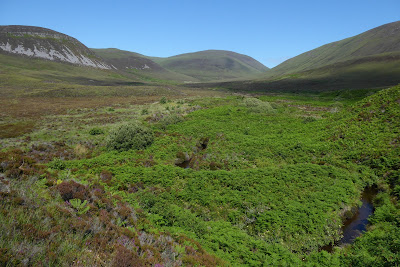 I am biased, but I find this the most exhilarating view in Orkney.

Fortunately, where this burn meets the Rackwick Road, there was some shelter from the breeze and, within a few minutes, both Our Lass and M had spotted distant dragonflies hawking for smaller insects. Not so fortunately, this spot was at the tip of a meander, meaning that when the dragonflies landed on low vegetation to bask in the sun, they were out of sight to anyone foolhardy enough to struggle through chest high bracken with the aim of identifying said dragons. Apparently.

But I was keen for a close encounter, so I nipped over a few wooden bridges, along the road a short distance, then back to the valley on the opposite bank, which gave excellent views of a roosting male Common Hawker. 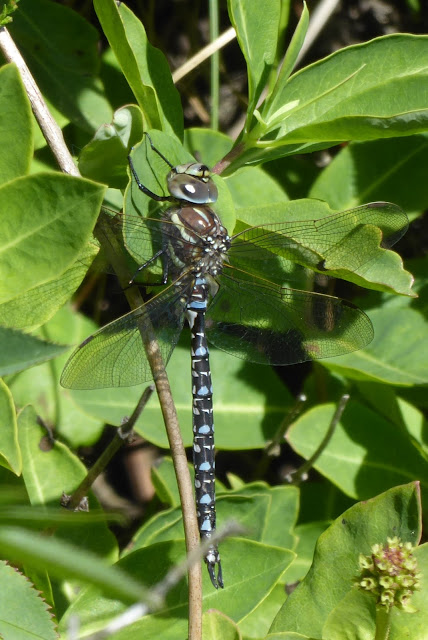 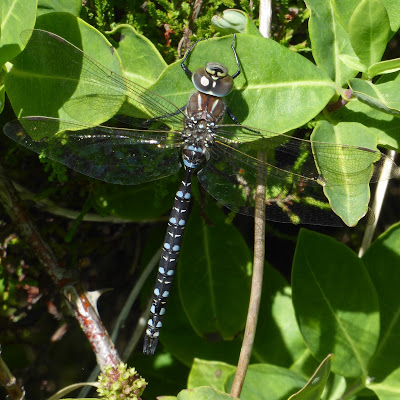 On the pool by the road, we also found a female Emerald Damselfly. Happy sigh. 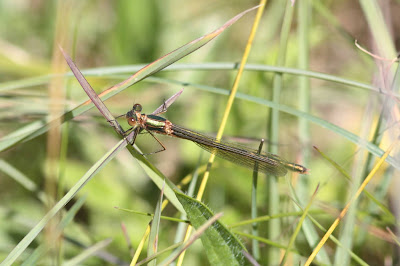 At another pool across the other side of the island, Our Lass spotted a Black Darter, which didn't hang around for a photo. Here, also, was a colony of tiny mining bees of the Genus Andrena, busy little creatures which were difficult to capture on camera. 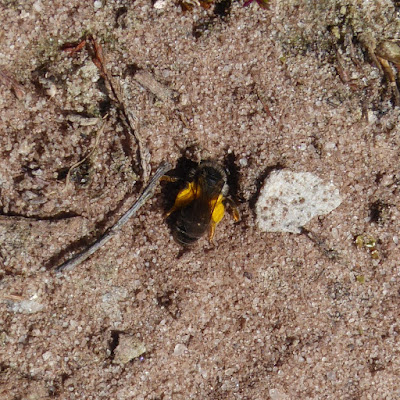 And as if to properly mark the occasion, we just had time to fit in coffee and cake at the island tearoom, which helpfully provided outside seating. With al fresco dining, the one casualty of the breeze was the froth of M's cappuccino.
Posted by Imperfect and Tense at 06:30

You wouldn't like to send me a map ref for the bees would you Graeme? I'd like to see those.

No problem, I'll mail it over.