Just about a year ago, I had some luck in capturing images of Brown Hares on agricultural land to the north of the city. As a firm believer in the seasonal and cyclical nature of all things, it was time to put on my boots and head out for the morning, hoping to catch views of a female "boxing" away the unwanted attentions of a male.
As I parked the car, I could see a tractor crossing and recrossing one of the fields in which I hoped to spot the hares. Bother. To make matters worse, there was an easterly breeze, which would blow my scent towards the area in question. Double bother.
Changing plan slightly, I walked through Little Linford Wood, a Wildlife Trust site, to the opposite side of the ridge, planning to traverse west in an anti-clockwise circle, to return to the ridge downwind and away from the farmer's tractor.
In the valley at the bottom of the wood, I was fortunate to spot a Little Owl, roosting on an old barn. 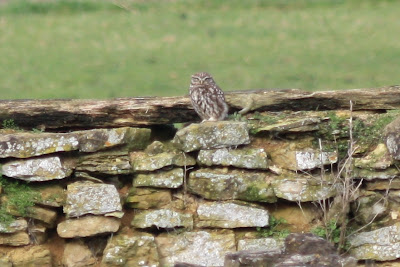 As I walked up the valley, a Little Egret passed me, going in the opposite direction, perhaps to a pool lower down the brook. 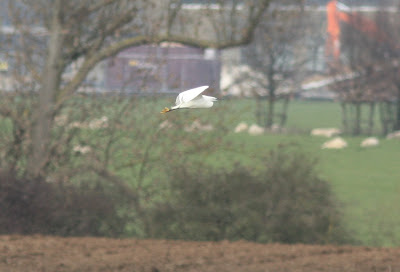 Another reason for my trip was to make the most of the habitat, as there are several threats to this area of land. The first of these is the proposal to erect a wind farm along the ridge, with several turbines up to 450' in height. Currently, the only sign of this scheme is an anemometer, gathering wind speed data. In the background, across the other side of the river valley, is the TV tower for the city. 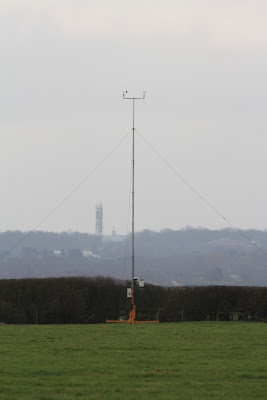 At some point soon, I will have to return to the subject of wind farms, a topic which presents me with something of a dilemma. They are one of several environmental solutions to our energy needs, though this positive benefit is countered by the negative impact they can have on the ecology of their immediate environment.
Moving west along the top of the ridge, there was still no sign of a hare. However, a small flock of chirruping birds flew over my head and landed on top of a hedge. Tree Sparrows! 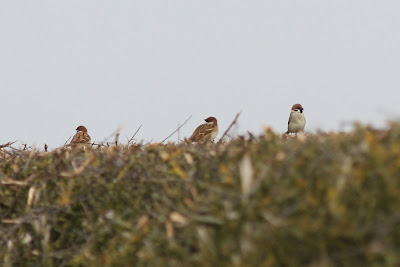 There were several flocks of Skylarks in the fields and I spotted four Pied Wagtails foraging on a muck heap. Dropping back into the valley on the north side of the ridge, I passed a farm that is the other cause of concern in the area. Hedges have been grubbed out and fences removed to create larger fields with fewer margins. If you can pardon the pun, dear reader, this overtly commercial approach goes against the grain at a time when environmental stewardship should be the norm. I was heartened to discover that the situation was not as awful as first thought. The hedges that were removed appeared to have been one side of a double row, so at least one row remained as habitat for all the Red and Amber List species I was seeing on my walk.
As I meandered back along the side of the valley, the hedgerows were full of new growth, including Dog's Mercury, that ubiquitous indicator of ancient woodland. 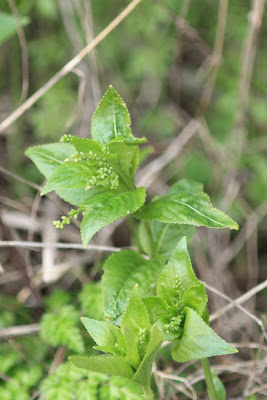 A fallen log showed signs of at least some mammalian activity, presumably the claw marks of a Badger. 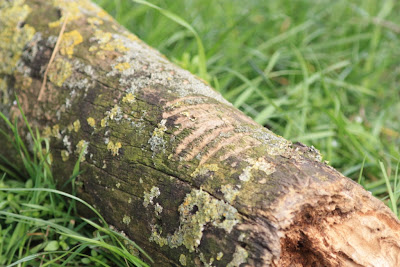 The tractor activity seemed to have ceased, so I climbed the ridge once more, and had a fortuitous encounter with a few Yellowhammers, though there were far fewer of these than their Reed Bunting cousins. 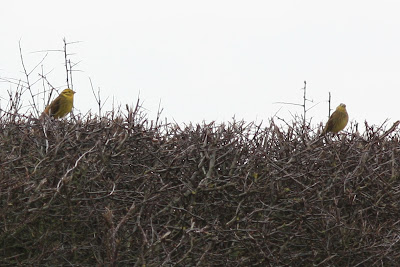 Scanning the ridge with my binoculars, it became obvious that there were no hares to be seen, so I reluctantly headed back to the woods, alongside the field where the farmer had been working. Suddenly, not one, but two, creatures emerged cautiously from the wood, uncertain whether it was now safe to do so. They were some distance from me, but had the good grace to appear at the same time and in the same location. One hare and one Muntjac Deer. 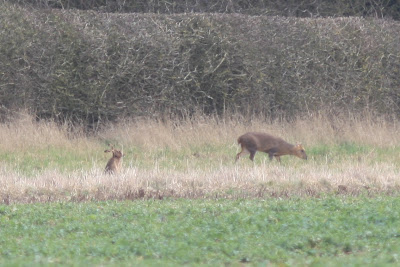 So whilst close up pics of "boxing" were not possible, I was simply pleased to have seen a hare at all.
Posted by Imperfect and Tense at 19:58

Why is 'boxing' in quotes? I'm always entertained by homophones, puns, and subtext. Glad you found a hair, er, hare. Thought of you when I found this (warning, it's full of curses): http://learnyourdamnhomophones.com/

Dear Captain Sundial, Whilst I'm well aware that Milton Keynes is still a town to the rest of the world, in its own head it's a city. Perhaps if there's a psychiatrist's couch big enough to accommodate 250,000 people at once, then we can all have some therapy :o)

Katie, Thanks for the link! And the warning! My work colleagues wondered why I was laughing so much. To my mind, a day without puns is a day without a soul.

You're probably correct to rebuke me over the quotation marks. Boxing is a human endeavour, I don't know what the hares call it. Please enjoy the video at http://www.bbc.co.uk/programmes/p003b0qr
Regards, Graeme

Finally got around to checking out that video you provided. No can do. "Not available in your area." There is a fuzzy photo still, so I got the gist. I guess it's the hare equivalent of a woman slapping a man if he gets too fresh? Too funny!

That analogy is spot on! Sorry about the regional limitation, perhaps I will dig out my handycam and try to capture the scene locally.